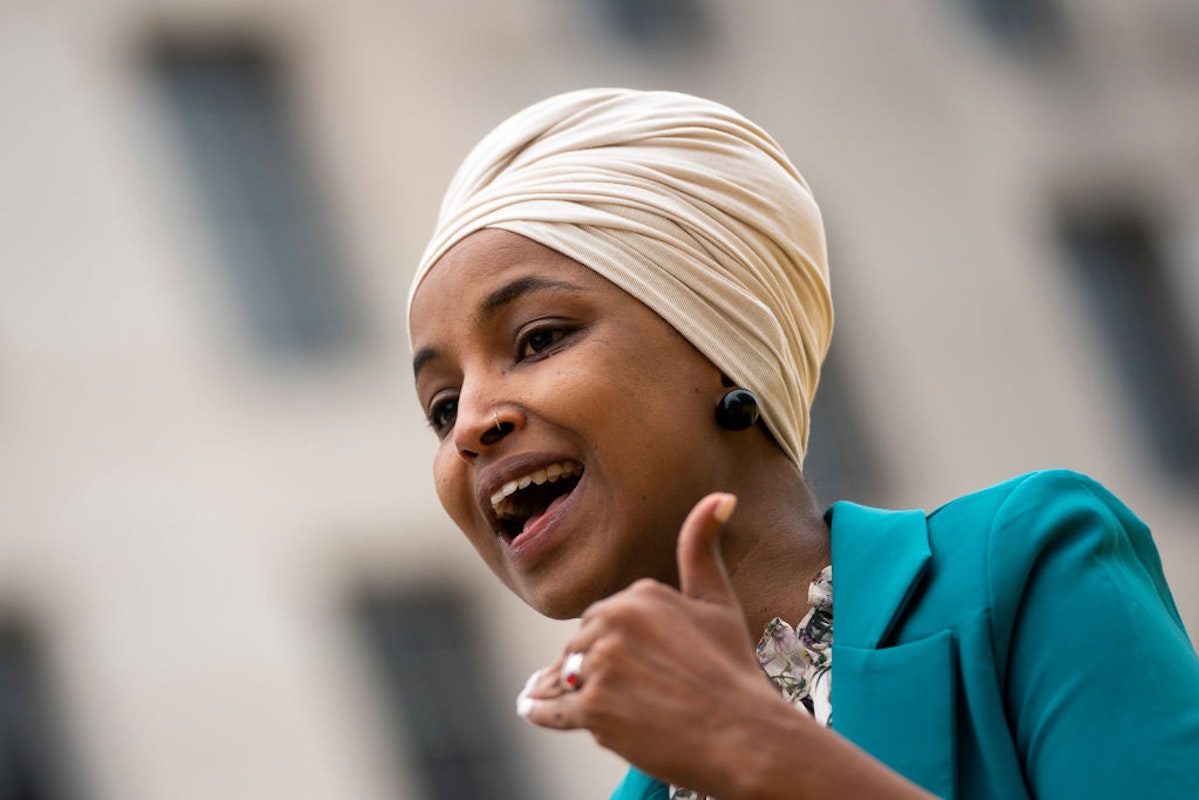 Congresswoman Ilhan Omar (D-MN) raised questions on Tuesday about supplying large numbers of American weapons to Ukraine, arguing that the results of taking such action could be “unpredictable” or “disastrous.”

“The consequences of flooding Ukraine with billion dollars in American weapons, likely not limited to just military-specific equipment but also including small arms + ammo, are unpredictable & likely disastrous,” Omar tweeted early Tuesday morning. “Specially [sic] when they are given to paramilitary groups w/out accountability.”

The consequences of flooding Ukraine with billion dollars in 🇺🇸 weapons, likely not limited to just military-specific equipment but also including small arms + ammo, are unpredictable & likely disastrous.

Specially when they are given to paramilitary groups w/out accountability.

Critics immediately responded, asking what the consequences might be if no one supplied arms and ammunition to Ukrainians who were well into a second week of attempting to repel Russian occupation forces.

“You’re worrying about a possible problem, which very much is possible. But the alternative is a sure problem – not arming people who are fighting for their very sovereignty and letting them get slaughtered in an unjust imperial invasion,” Nick Pappas tweeted.

Louise Mensch, responding to another tweet calling Omar’s comment “stupid,” added,”Oh I disagree. I think it’s intentionally malicious. @IlhanMN, those who shill for Vladimir Putin at this time will not be forgotten or forgiven.”

“Tell this to 8 years old Tanya, that died from dehydration after being stuck under the rubble of her house after Russian shelling,” @tarasmi tweeted in response to a photo posted by Ukrainian Member of Parliament Lesia Vasylenko.

“This child died of dehydration in #Mariupol. The city is blockaded for days now. 3 times #Russia broke the promise of a humanitarian corridor, shooting missiles at civilians. Maybe now is time for #NoFlyZoneOverUkraine?” Vasylenko had captioned a photo of the dead girl.

“Ilhan Omar, who said ‘some people did something,’ is now saying the people of #Ukraine should be left to die. Let that sink in,” Heshmat Alavi said, clearly referencing Omar’s previous comments appearing to trivialize the 9/11 terror attacks on U.S. soil.

“On the other hand, the consequences of not doing that are predictable and definitely disastrous,” economist Wojtek Kopczuk added.

University of Illinois International Relations professor Nicholas Grossman argued that Omar’s assessment might be a bit wide of the mark, noting that the weapons headed to Ukraine were not going to militia groups whose loyalties were unknown.

“There are consequences of not arming Ukraine too, you know. And in Ukraine, unlike in, say, Syria, outside weapons go to an organized state military, not militias of uncertain loyalties (which is one reason US & allies have sent a lot more, and more advanced, weapons to Ukraine),” he explained.

“Easy to criticize and question. Hard to lead. What policies are you recommending? Are you saying we should not provide weapons and financial support for Ukraine?” @villi tweeted, prompting a response from Omar.

“I support giving Ukraine the resources it needs to defend its people, I just have legitimate concerns about the size and scope. Btw, criticizing and questioning is my job as a leader and a member of Congress. It’s the hardest part of the job, trust me it’s easy to just follow,” she said.

I support giving Ukraine the resources it needs to defend its people, I just have legitimate concerns about the size and scope.

Btw, criticizing and questioning is my job as a leader and a member of Congress. It’s the hardest part of the job, trust me it’s easy to just follow. https://t.co/XIioIlU5D8

A postwar weapons black market — like the one that arose after the last armed conflict between Russia and Ukraine — is a possible concern, but as several of Omar’s critics pointed out, there are key differences that should be noted. First, the weapons are being delivered to Ukraine’s central government rather than to loosely organized militia groups and second, the alternative to arming Ukraine is undeniably both predictable and disastrous.

0 6
Dr. McCullough: We can get ourselves back to normal

0 9
‘I Have Been Stunned At The Response’: South African Dr. Who Reported Omicron Slams Hysteria