The sun is setting on a beautiful day in early June. The apple trees are in bloom. An old man is at the reins of his buggy, on the long road home. He begins to feel dizzy. It’s not his heart, this time.

A quiet man, shy of company, he is understandably uneasy, for never in his life has he been talked to as much as he’s being talked to right now. His seatmate, a young girl, has a tongue of her own. She knows it. She’s been told her whole life, by one ill-tempered, exasperated adult after another, that she talks too much. But the world is so full of wonder, of beauty, of feeling — of deep feeling — how can she keep it to herself?

The old man rides in silence. Like many an adult before him, he has every right to be annoyed by this talkative pest. Only, he isn’t. A gentle soul, something in him begins to take to something in her. Listening to this girl, he begins to think, may not be so bad.

Anne, at this point, is not yet of Green Gables. She is Anne of Orphan Asylum, Anne of Foster Homes, Anne of Drudgery, Poverty, and Neglect. If not for something peculiar, some spark of sympathy that against all worldly sense keeps a pair of lonely farmers from sending her on her way, she likely would have forever remained Anne of Friendless Misery. Thankfully for her, and for generations of readers, Matthew and Marilla Cuthbert rescue Anne. Then, of course, she rescues them right back.

There are people in Anne’s world who value girls only for the chores they can accomplish, not for the dreams they have. Analyzing L. M. Montgomery’s novel, we have a simple word for these people: antagonists. The saltier amongst us may go for “misogynists.” Turning our gaze upon young women as they live in today’s world, it seems we can add another pejorative to the list: doctors.

Most readers understandably credit the Cuthberts, but it is in fact a stroke of dumb luck that truly delivers Anne from her nightmare life of dull, unimaginative drudgery. Her saving grace is simply this: nobody in late 19th century Prince Edward Island had ever heard of ADHD (Attention-Deficit/Hyperactivity Disorder).

Had a pioneering Canadian pediatrician come up with some rudimentary Ritalin, Montgomery would barely have had enough material for a short story, let alone one of the world’s most beloved novels. Within a few months of her arrival in Avonlea, the excessively talkative, constantly daydreaming Anne would have become, via the miracle of modern medicine, a model pupil.

Her schoolmate Minnie Andrews is one such star in the academic firmament “and there isn’t a spark of imagination or life in her.” Instead of violently disrupting class, spending hours in detention, and angrily clashing with her teacher, to the point of withdrawing from school altogether, a properly medicated Anne would have taken to her slate with perfect dull-eyed obedience.

Montgomery wisely chose not to write a book about Minnie Andrews. Had she done so, many would wisely have chosen not to read it. The making of Minnie’s pristine report card, after all, is hardly the sort of story that warrants a sequel, let alone an international fan base.

Not that I have anything against Minnie. I was perilously Minnie-esque in my own school days. The world needs Minnies, and probably could not function long without them. But don’t we need a few Annes? The reason I’m writing this isn’t to slander Minnie. I’m trying to save Anne.

Rescue These Kids with a Pleasant Environment

People once looked upon a world comprised of Annes and Minnies (and Dianas, Gilberts, and yes, even Josies) and rejoiced in the wonderful diversity of human life and experience.

Today, with the rise of the nationally standardized, uniform education-pharmaceutical complex, far too many people look upon that rich tapestry and see only undiagnosed pathologies. In a saner time, people saw children struggling in an unpleasant environment and endeavored to rescue them by providing a more nurturing one.

Today, instead of changing the environment, we use the power of prescriptions to change the child. Instead of cherishing and nurturing the unique gifts and interests of each student, we try to force them all into docile “model pupil” mode, and drug the ones who don’t conform. Instead of listening to what a girl has to say, we medicate her until she’s quiet.

Anne’s gift for speech, sense of drama, and vivid imagination can lead to aggravation, yes, but also to unforgettable poetry recitals and life-changing friendships. In today’s world, medications are employed effectively to dull any disruptions. Nobody would accuse a modern, post-stimulant Anne Shirley of excessive talking. It would certainly be a quieter world. Would it be a better one?

Dr. Gaty is a pediatrician in the Austin, TX suburbs. He writes at the Substack “Unofficial Pediatrics.” 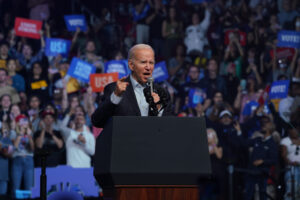 0 22
Utility Company Shuts Off Power to 75,000 Californians on Thanksgiving Due to High Winds