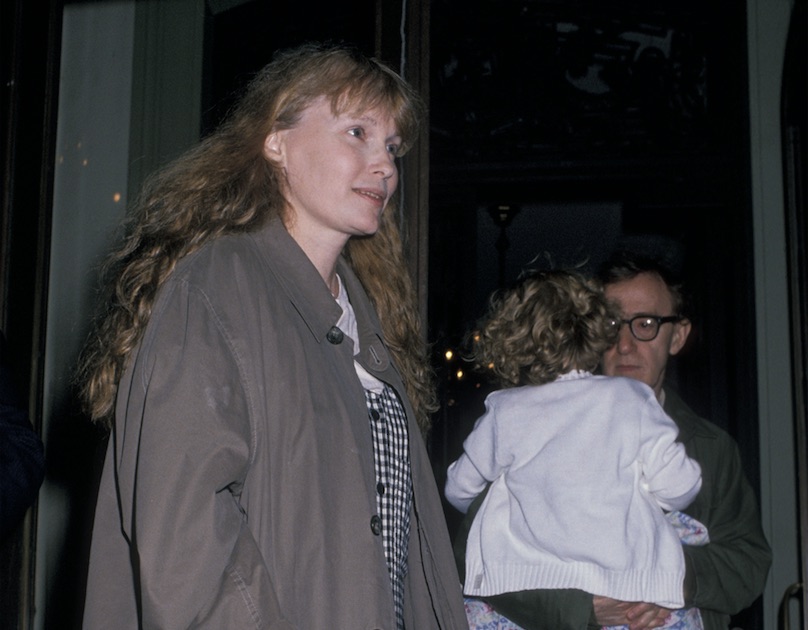 In a never-before-seen 1992 home video, Dylan Farrow, the adopted daughter of Woody Allen and Mia Farrow, is heard as a seven-year-old, telling her mother that Allen “touched her private parts,” telling her, “’Do not move, I have to do this.” The young girl then poignantly tells her mother, “I didn’t want him to do it, mama. I didn’t like it.”

The video is featured in a new four-part HBO documentary series about the Oscar-winning director titled “Allen v. Farrow” that premieres Sunday on HBO. The series will “feature recordings that Mia secretly made of her phone conversations with Allen, including one in which she tells him Dylan ‘is not alright’ after the alleged incident,” The Daily Mail reported.

Mia Farrow and Allen, who had been together since 1979, split after she found out he was having an affair with her adopted daughter, Soon-Yi Previn. At the time Allen was 55 and Soon-Yi Previn, whom Farrow had adopted when she was married to composer-conductor Andre Previn, was 21. After Farrow left Allen, she accused him of sexually assaulting Dylan when she was a child.

“Allen has always strongly maintained his innocence, claiming that Dylan fabricated the allegations of abuse or that she had been coached by Mia who was jealous of his relationship with Soon-Yi Previn,” the Daily Mail noted.

In the documentary, Dylan Farrow states that after her brother Ronan Farrow was born, Allen was “very slowly instilling the idea in my head she [Mia] was more (Ronan’s) parent, he was more my parent; I was daddy’s girl,”  that she “worshiped” Allen and his humor made her “feel so special,” that Allen was like a “magnet” to her, giving her “intense affection all the time … I was always in his clutches. He was always hunting me.”

“Family members describe how Dylan began locking herself in the bathroom whenever Allen would come over or pretended to be a dead animal so she couldn’t talk,” the Daily Mail reported.

“I remember sitting on the edge of his bed, light in the room, the satin sheets,” Dylan Farrow states. “There were clarinet reeds. I have memories of getting into bed with him. He was in his underwear; I’m in my underwear cuddling. I remember his breath on me. He would just wrap his body around me, very intimately.”

“I would suddenly walk in and there she would be in his bed with him in his underwear,” Mia Farrow alleges. “Sometimes he would also kneel in front of her or sit next to her and put his face in her lap which I caught a couple of times and I didn’t think that was right.”

In one alleged incident, a family friend, Casey Pascal told Mia Farrow that a babysitter in the house claimed she witnessed Dylan sitting on the couch with Allen “kneeling on the floor with his head buried in her lap.” Pascal continued, “She said she felt she’d walked in on a very adult situation and realized it was a child and she was horrified to the core. She said Dylan was staring off into space and Woody’s face was in her lap.”

Mia Farrow states, “I remembered she (Dylan) had not had any underpants on (afterwards). She was sitting next to me. I said to her: ‘Did this happen, did daddy have his face in your lap yesterday?’ She said yes.”

Dylan Farrow says of another alleged incident, “He touched (my) privates and then he was breathing on my leg. And then, this (where I mean) he squeezed me too hard that I couldn’t breathe.” Her mother asked, “What do you mean he touched your privates? Where did he touch you?” Dylan Farrow gestured to her buttocks.

Another video features Dylan Farrow speaking of an alleged incident in the attic. She states, “He said: ‘What about some father-daughter time.’ And then I said: ‘Well, okay.’ We went into your (Mia’s) room and we went into the attic. Then he started telling me weird things. Then he went behind me and touched my privates.”

“Which privates did he touch?” Mia asks.

Her daughter, indicating her private area, answers, “This part.”

In another segment, Mia says, “Do you wanna tell me what things daddy said in the attic when you were in the attic?”

The documentary shows a phone call between Allen and Mia Farrow in which she tells him, “She’s not alright, Woody. She walks around the house holding her vagina. She sleeps with me. She’s scared of you and you’ve hurt her. … She said, ‘Mommy you didn’t help. Daddy shouldn’t have done that. He shouldn’t have hurt me like that.’ If you heard her you would weep inside and you would just want to be dead because I don’t know how you can live with what you did.”

In 2014, Ronan Farrow, disgusted that the Golden Globes were honoring Allen, snapped, “Missed the Woody Allen tribute – did they put the part where a woman publicly confirmed he molested her at age 7 before or after Annie Hall?”

Moses Farrow, another adopted child in the Farrow family, rejected the claims by Dylan that she had been abused, and accused Mia Farrow of abuse, writing in May 2018: “I’m sure my mother had good intentions in adopting children with disabilities from the direst of circumstances, but the reality inside our walls was very different. It pains me to recall instances in which I witnessed siblings, some blind or physically disabled, dragged down a flight of stairs to be thrown into a bedroom or a closet, then having the door locked from the outside. She even shut my brother Thaddeus, paraplegic from polio, in an outdoor shed overnight as punishment for a minor transgression.”

He told People Magazine, “My mother drummed it into me to hate my father for tearing apart the family and sexually molesting my sister. And I hated him for her for years. I see now that this was a vengeful way to pay him back for falling in love with Soon-Yi.”

The Guardian noted in December 2020:

When Moses’s claims were put to the Farrow family, they directed me to a 2018 statement made by Matthew, Sascha, Fletcher and Daisy Previn, and Ronan, Isaiah and Quincy Farrow: “None of us ever witnessed anything other than compassionate treatment in our home, which is why the courts granted sole custody to our mother of all her children. We reject any effort to deflect from Dylan’s allegation by trying to vilify our mom.”)

0 20
Convicted Or Not, Some GOP Senators Say Trump Won’t Be Able To Run Again

0 25
Trump: Justice is coming for Hillary