In another email, Hunter Biden’s associates touted Hunter’s access to the White House and contrasted his willingness to “take on risk” with that of Chris Heinz—then-Secretary of State John Kerry’s stepson and a close friend of Biden and Archer—who was uncomfortable with some of their potential partnerships.

In October 2013, Hunter Biden’s associates (including Devon Archer) discussed which one of their corporate vehicles would be appropriate for a new deal they were working on. Archer noted their need to use a “Rosemont Seneca SPV” (also known as a special purpose vehicle) because Rosemont Capital was too close to the Heinz family and because using an SPV could “bring Hunter into the mix.” Archer explained his desire “to leverage Hunter more” in a way that didn’t involve Heinz, who Archer called “much more risk averse.”

Another benefit of the Rosemont Seneca SPV was, per an October 5 email from Hunter Biden and Devon Archer’s business associate Bevan Cooney to Archer, it “would be good to put some honey in Hunter’s pocket.” That same day Archer responded: “Agreed. I also have more autonomy with that company as I own it with Hunter and he’s willing to take on risk… Hunter will work if we need him too [sic] as well.”

Five days later, Biden’s business associate Jason Galanis confirmed to Archer that he had changed the corporate references in the proposal to include a Hunter Biden-controlled firm. Archer replied, clearly pleased. “Perfect. Let’s just keep to that. We get the Biden lift and stay out of Heinz panties.” Archer had noted he would use Rosemont Seneca Partners instead of Rosemont Capital, in which Heinz held a stake. Hunter Biden and Devon Archer’s Rosemont Seneca Partners would play a pivotal role in their future deals.

For example, in December 2013, Rosemont Seneca Partners finalized a deal with the Chinese government-backed investment vehicle, Bohai Harvest, to form Bohai Harvest RST, a new firm in which Hunter Biden would maintain a 10% equity stake and whose funds would grow to at least $1.5 billion

Soon after that deal (and after Biden and Archer joined the board of Ukraine’s Burisma Holdings), Heinz made moves to sever his formal business ties with Archer and Biden in May 2014. Just hours after Burisma’s announcement that Biden and Archer had joined the board, Heinz emailed top aides for his step-father and then-Secretary of State John Kerry, alerting them to the potentially compromising arrangement. “Apparently Devon and Hunter both joined the board of Burisma and a press release went out today,” Heinz said. “I can’t speak why they decided to, but there was no investment by our firm in their company.”

But Heinz’s concerns apparently did not deter Biden and his associates from continuing to leverage the Biden family name to pursue questionable business arrangements.

In an email on November 4, 2014, Biden’s business associate Jason Galanis discussed a draft pitch that he was preparing for possible investors. Galanis explained that the presentation would cover boilerplate issues like investor protections. But Galanis also sought to emphasize their connections to the White House, specifically Vice President Joe Biden: “I wanted to focus on the ‘other currency’ we are bringing to the table…direct administration pipeline.” Galanis also mentioned dropping Joe Biden’s connections in their pitch when dealing with union pension funds. Galanis wrote, “maybe we should also remind of HB’s dad’s union relationships to justify the ask??” 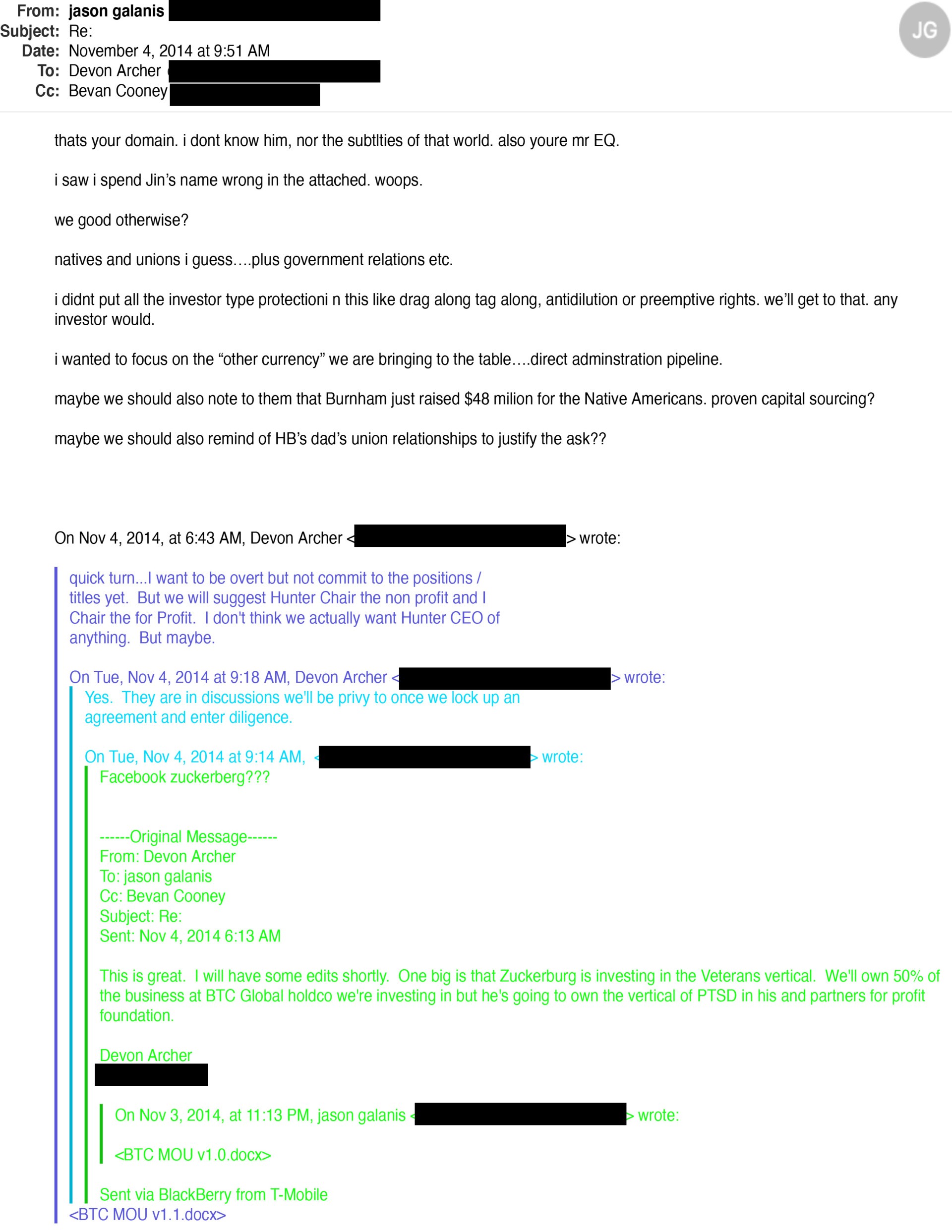 In a March 2015 draft investor pitch, Biden’s associates wrote about the need to “leverage Hunter Biden Taft Hartley network.” Taft Hartley is the law governing union pension funds, and Joe Biden has a long-established history of close relationships with union bosses, which Hunter Biden and Joe’s brother James Biden have reportedly sought to capitalize on in the past. The presentation noted that the team “led by Archer and Biden” would create “unprecedented opportunity for a firm at our scale,” and referenced tapping finances from Chinese officials. In December 2013, as has been widely reported, Biden and Archer secured a $1 billion private equity deal financed by the Chinese government. Biden and his associates wanted to go back for even more Chinese money. 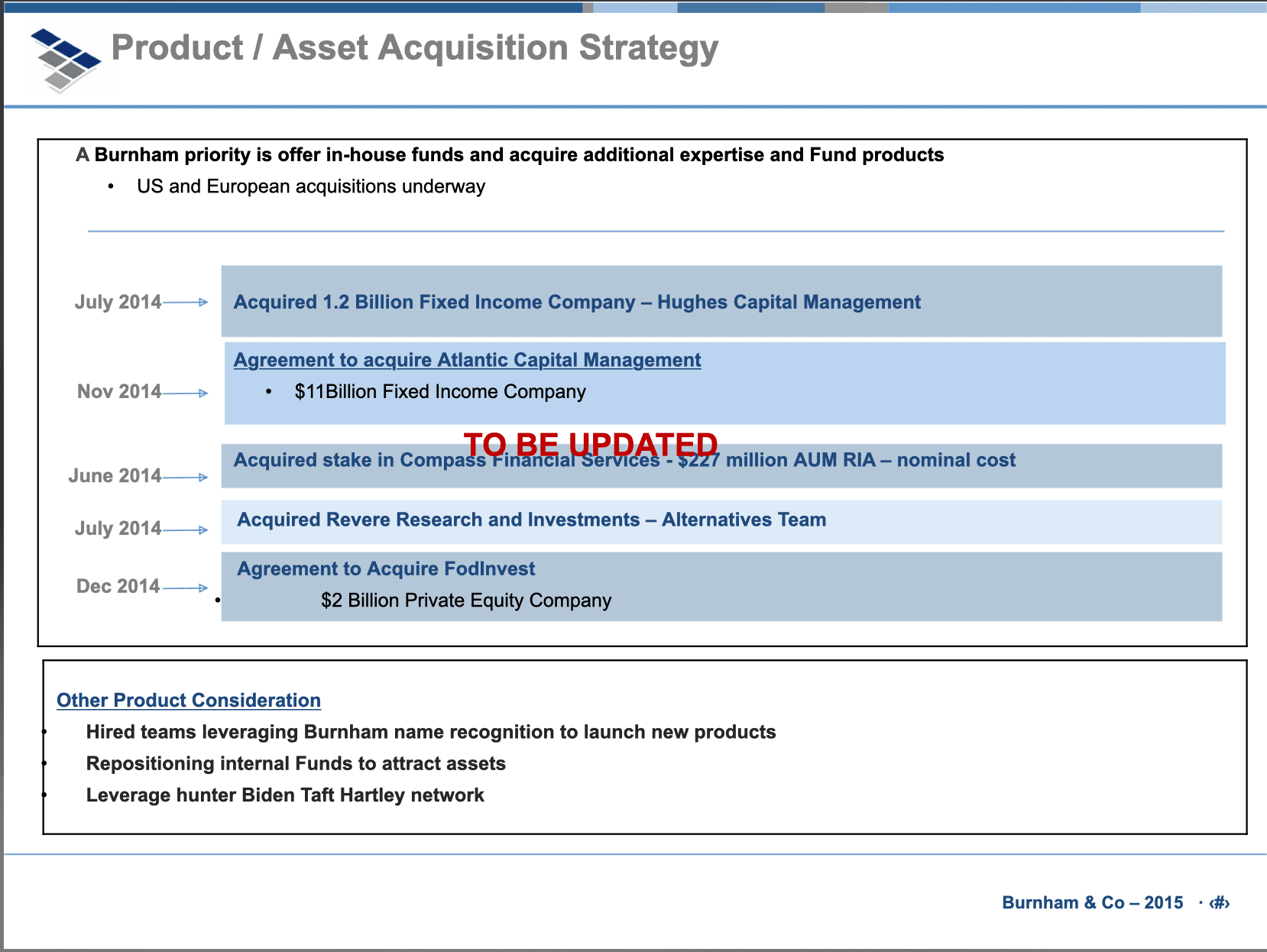 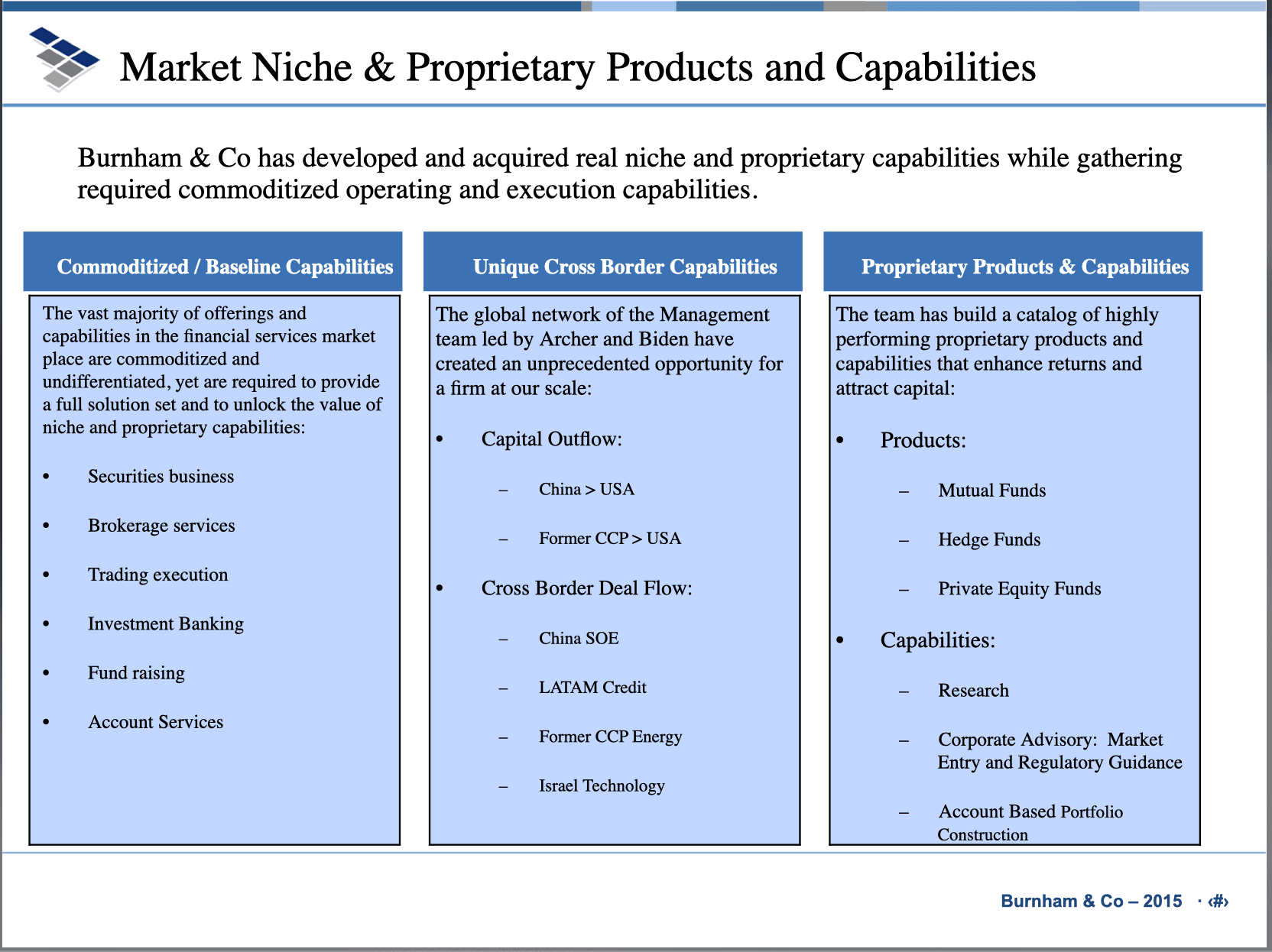 The above quotes are taken directly from a trove of 26,000 emails and attachments from Hunter Biden and Devon Archer’s business associate Bevan Cooney. These emails—provided to Schweizer from Cooney via journalist Matthew Tyrmand—are completely separate from the emails released by the New York Post (purportedly derived from a backup of Hunter Biden’s laptop hard drive).

Cooney is currently serving time in federal prison for his role in the tribal bond scheme that also resulted in the conviction of Devon Archer on conspiracy and securities fraud charges. Archer currently awaits sentencing for that conviction.

Peter Schweizer is the author of Profiles in Corruption: Abuse of Power by America’s Progressive Elite. Seamus Bruner is the author of Fallout: Nuclear Bribes, Russian Spies, and the Washington Lies that Enriched the Clinton and Biden Dynasties. 0 828
President Trump Warns Weakling GOP Senators: “I Will NEVER FORGET! — And Either Will His Voters!