The announcement keeps a promise Speaker of the House Nancy Pelosi made to a group of moderate Democrats led by New Jersey Rep. Josh Gottheimer, but is sure to anger the furthest-left members of the party. Those Democrats, led by New York Rep. Alexandria Ocasio-Cortez and Washington Rep. Pramila Jayapal, have promised to block the IIJA if it is not brought to the floor for a vote at the same time as the $3.5 trillion Build Back Better Act.

Democrats will bring the Build Back Better Act to the floor for a vote “as soon as it’s ready,” Hoyer said, according to Politico.

The moderate faction agreed in late August to vote to begin the reconciliation process in exchange for Pelosi’s promise that she would bring the IIJA to the floor on Sept. 27. The moderates had previously vowed to oppose a budget resolution until the IIJA, which passed the Senate 69-30, passed the House.

Pelosi and President Joe Biden had previously promised to pass both bills simultaneously, with Biden threatening to veto the IIJA unless the two are passed “in tandem.” The IIJA contains traditional infrastructure spending, including roads, bridges, broadband internet, and the U.S.’s electrical grid, while the Build Back Better Act is expected to include massive amounts of social spending, including universal preschool and a Medicare expansion. (RELATED: ANALYSIS: Special Pork Projects Drive The Biden Infrastructure Deal Through The Senate)

The Build Back Better Act will not be brought to the House floor by Sept. 27, and Democratic leadership is struggling to keep all of its members on board. A key drug pricing provision was blocked in committee on Sept. 15 after three Democrats voted with Republicans to kill it. Florida Rep. Stephanie Murphy, a key moderate, voted against the bill in the Ways and Means Committee, although she has said that she will vote for a final package that is “appropriately targeted and fiscally responsible.” North Carolina Rep. Alma Adams, a co-chair of the HBCU Caucus, has also threatened to oppose the bill if it does not include new funding for historically black colleges and universities.

In the Senate, West Virginia’s Joe Manchin and Arizona’s Kyrsten Sinema have expressed skepticism about the size of the package, with Manchin calling for a “strategic pause” due to inflation concerns. Manchin has reportedly expressed interest in waiting until 2022 to pass the legislation.

Looming over the IIJA vote is the threat from far-left lawmakers to block the legislation. The Progressive Caucus has 96 members, and chairwoman Jayapal has promised that the group will “only vote for the infrastructure bill after passing the reconciliation bill.”

Rep. AOC is a NO on infrastructure without reconciliation.

“Nothing would give me more pleasure than to tank a billionaire, dark money, fossil fuel, Exxon lobbyist-drafted ‘energy’ infrastructure bill if they come after our child care and climate priorities.”

“Nothing would give me more pleasure than to tank a billionaire, dark money, fossil fuel, Exxon lobbyist-drafted ‘energy’ infrastructure bill if they come after our child care and climate priorities,” Ocasio-Cortez posted on Instagram on Sept. 9. 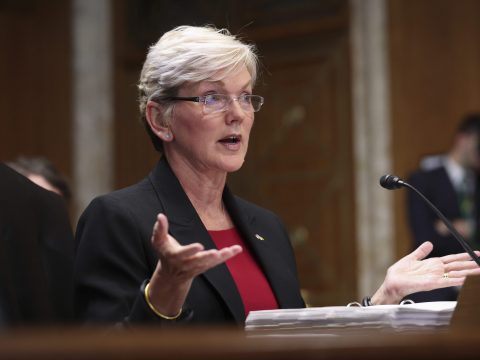