The newly released, less redacted Trump Mar-a-Lago raid affidavit shed new light on the investigation into the former president — and why the FBI stormed his Florida home.

Crucial new details, including information on security footage obtained by the FBI from inside Mar-a-Lago, were hidden inside the 32-page affidavit, which was released on Tuesday.

One of the key pieces of information learned from the filing is that Trump previously handed over documents to the FBI in a way that made officials think even the former president’s team knew the records were classified.

On June 3, DOJ and FBI officials collected documents in a Redweld envelope, an accordion-style folder, wrapped in plastic tape in a way the bureau said suggested Trump’s team knew the documents had not been declassified. The envelope was found during a review of boxes located in a Mar-a-Lago storage room. 38 documents with classification markings, including five marked “confidential,” 16 marked “secret,” and 17 marked “top secret,” were found in the envelope.

“When producing the documents, neither FPOTUS COUNSEL 1 nor INDIVIDUAL 2 asserted that FPOTUS had declassified the documents,” the affidavit states. “The documents being in a Redweld envelope wrapped in tape appears to be consistent with an effort to handle the documents as if they were still classified.”

FBI agents “observed markings” related to “HCS,” or the Human Intelligence Control System, which is designed to protect human sources; and “SI,” or Special Intelligence, which generally relates to communications, signals, or electronic intelligence. There were also markings related to “FISA,” or the Foreign Intelligence Surveillance Act.

Trump’s legal team has repeatedly declined to assert in court that the records at Mar-a-Lago were all declassified by Trump, despite the former president’s claim of a “standing order” to do so.

Another revelation in the less-redacted affidavit includes new details on how the Justice Department obtained access to security footage at Mar-a-Lago in the lead-up to the raid.

TRUMP MAY STILL HAVE PRESIDENTIAL RECORDS THAT HAVE NOT BEEN RECOVERED: NATIONAL ARCHIVES

The subpoena to the Trump Organization sought “any and all surveillance records, videos, images, photographs, and/or CCTV from internal cameras located on ground floor (basement)” at Mar-a-Lago dating from Jan. 10 until the present. The bureau said Trump Organization representatives provided a hard drive to FBI agents on July 6.

The FBI said that, when receiving the records from Mar-a-Lago in June, Trump’s lawyer stated he was advised all the records that came from the Trump White House were stored in the Mar-a-Lago storage room and that those were the final remaining group of documents brought to Florida.

Records show Trump was being investigated under the Espionage Act in relation to retention of national defense information, as well as under statutes related to the concealment of government records and obstruction of justice.

0 22
‘He Can No Longer Remain In Office’: NY Assembly Speaker Says Lawmakers Will Move ‘Quickly’ On Impeachment 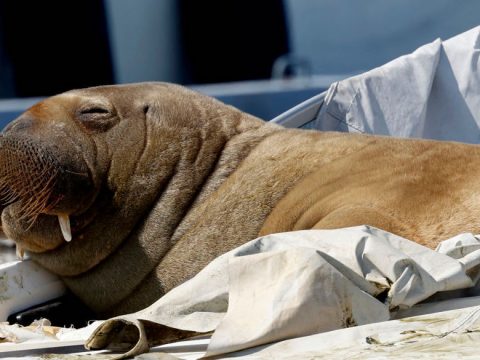 0 66
Norway Defends Euthanizing Walrus That Got Too Famous