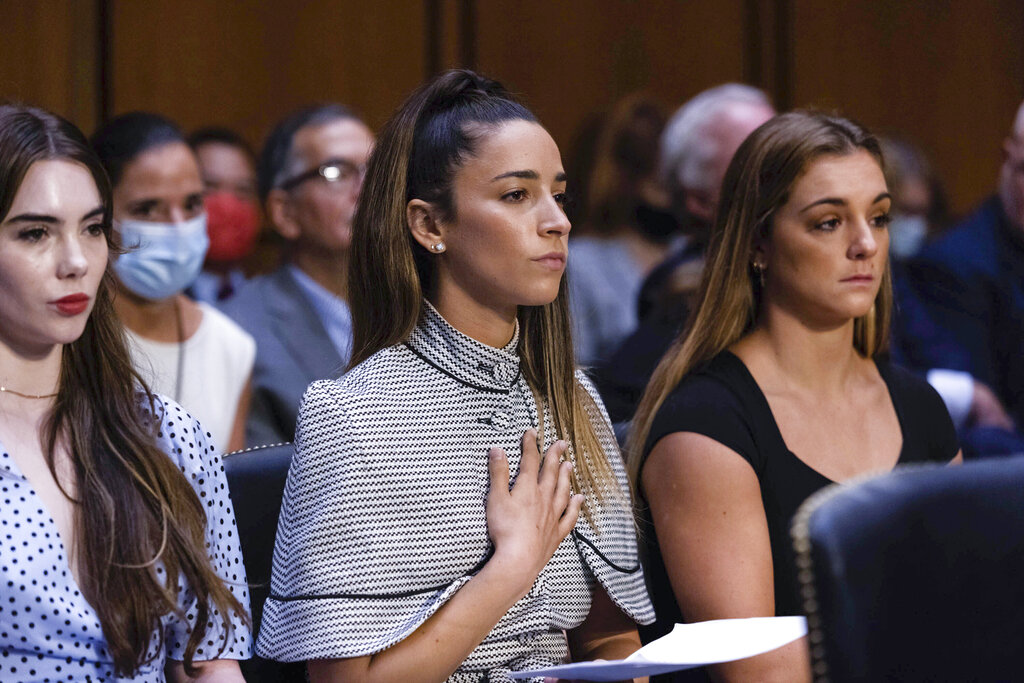 United States gymnasts from left, McKayla Maroney, Aly Raisman and Maggie Nichols, arrive for a Senate Judiciary hearing about the Inspector General’s report on the FBI’s handling of the Larry Nassar investigation on Capitol Hill, Wednesday, Sept. 15, 2021, in Washington. Nassar was charged in 2016 with federal child pornography offenses and sexual abuse charges in Michigan. He is now serving decades in prison after hundreds of girls and women said he sexually abused them under the guise of medical treatment when he worked for Michigan State and Indiana-based USA Gymnastics, which trains Olympians. United States Olympic gymnast Aly Raisman is in foreground. (Graeme Jennings/Pool via AP)

Sen. Sheldon Whitehouse (D-R.I.) took time to compliment the women for coming forward to give their testimonies regarding there experiences while part of the USA Gymnastics.

“I want to compliment all of our witnesses for the stunning clarity and grace of your testimony at today’s Judiciary Committee,” he stated. “It is astonishing and disturbing how many people let you down. Your quest for accountability is 100 percent justified and thank you for pursuing it.”

The athletes testified the FBI minimized and disregarded them, turned a blind eye to their stories of abuse and let a child molester go free for more than a year while allowing his abuse to continue. The testimonies came after the Department of Justice released a 119 page report detailing “numerous and fundamental errors” in the FBI’s handling of the Nassar case.

“[The FBI] chose to protect a serial child molester rather than protect not only me, but countless others… this inaction directly allowed Nassar’s abuse to continue.”

FBI Director Christopher Wray also testified and admitted the agency betrayed its core duty of protecting people, specifically young women and girls. He added, the agency is now doing everything in its power to prevent something like this from happening again.

MUST-WATCH: Aly Raisman tells the Judiciary Committee she “felt pressured by the FBI to consent to Nassar’s plea deal” after which “Nassar found more than 100 new victims to molest.”

“It was like serving innocent children up to a pedophile on a silver platter.” pic.twitter.com/qI1PdZr1Ir