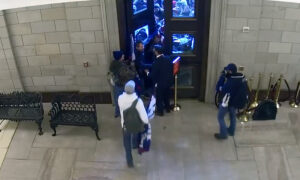 A South Carolina man who opened the inner Capitol Rotunda doors during the breach on Jan. 6, 2021, pleaded guilty in federal court on June 30 to two felony charges.

George Tenney III, 35, of Anderson, pleaded guilty in Washington to civil disorder and obstruction of an official proceeding.

Tenney faces up to five years in prison on the civil disorder charge and 20 years on the obstruction charge. He will be sentenced on Oct. 20.

Tenney played a pivotal role in allowing crowds into the Rotunda. He opened one of the magnetically locked inner doors after appearing to look to someone out of view of the security camera for instructions.

Video shows the outer Columbus Doors entry to the U.S. Capitol was open as protesters approached the east steps on Jan. 6, 2021. When the police line on the steps was breached, the doors were closed. (Parler/Screenshot via The Epoch TImes)

Federal prosecutors have charged a number of defendants, including members of the Oath Keepers, with “breaching” this entrance to the Capitol.

However, neither the huge bronze Columbus Doors on the outside, nor the magnetically secured inner doors can be opened from the outside.

Security video shows Tenney standing in the east foyer of the Rotunda and looking off-camera as if listening to someone.

Even though the inner doors can be opened in an emergency by holding the door handle down for three seconds, Tenney was able to open the left door as soon as he touched it, the video shows.

“A police officer who was outside tried to push [the doors] closed and Tenney resisted pushing against the door to try to keep it open,” the Department of Justice said in a news release.

“An employee of the House Sergeant-at-Arms then

All copyrights and legal uses attributed to content are located at the article origination: The Epoch Times, Guilty Pleas to Two Federal Felonies From Man Who Breached Rotunda Doors

0 36
LIVE NOW: Panel Discussion: Should We Change How the President Is Elected?