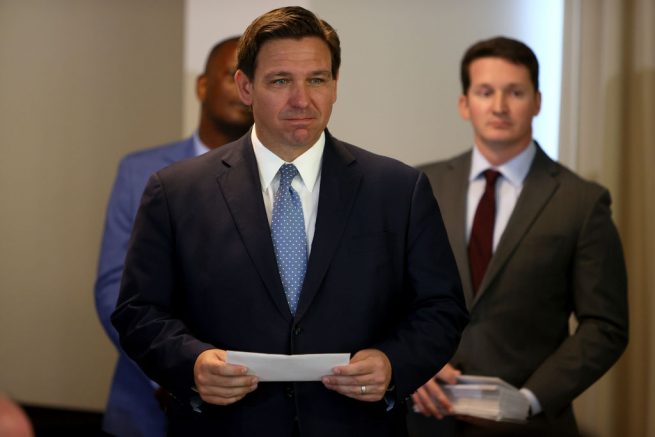 SURFSIDE, FLORIDA – AUGUST 10: Florida Gov. Ron DeSantis waits to present a check to a first responder during an event to give out bonuses to them held at the Grand Beach Hotel Surfside on August 10, 2021 in Surfside, Florida. (Photo by Joe Raedle/Getty Images)

Florida Gov. Ron DeSantis (R) has continued to fight for parents’ freedoms. On Thursday, DeSantis appealed a judge’s ruling against his order banning public schools from requiring students to mask-up.

The appeal put the ruling on hold, effectively reinstating the ban on mask mandates until a higher court rules on the case. However, plaintiffs have begun petitioning the court allow the judge’s ruling to stay in place pending the high court’s decision.

The lawsuit was filed by concerned parents who argued the virus still poses a risk to children under the age of 12 and who are not yet eligible to be vaccinated. Although, DeSantis has argued the best policy is to allow parents to opt-out of putting masks on their kids if that’s what they think is best for them.

Forcing kids to wear masks is bad policy. Parents are best equipped to decide whether they want their kids to wear a mask in school. Neither bureaucrats in Washington nor local authorities should be able to override the decision of the parents. pic.twitter.com/1TyFByAaWf

In the meantime, the court of appeals isn’t expected to make a ruling on the lawsuit until mid-November.

MORE NEWS: Secy. Of State Blinken: U.S. In Contact With Americans Left Behind