A Republican on the House Transportation and Infrastructure Committee says Mitch Landrieu’s links to Chinese Communist Party influence organizations should “disqualify” him from overseeing $1.2 trillion in infrastructure spending.

The Washington Free Beacon reported Landrieu serves as strategic adviser to the Heartland Association, which works with Chinese companies and organizations in the Communist Party’s United Front system to develop ties between China and the United States. Biden’s nominee to head the Export-Import Bank, Reta Jo Lewis, also advises the Heartland Association.

Former Missouri governor Bob Holden, the chairman of the association, earlier this year called for more Chinese investment in American infrastructure projects, saying the United States has “a huge need to rebuild our waterways, bridges and highways.” China has invested heavily through its Belt and Road Initiative in infrastructure projects in Europe, Africa, and Asia. American officials have said China uses Belt and Road to gain leverage over its foreign partners.

As infrastructure czar, Landrieu will hold sway over the allocation of spending on roads, ports, bridges, and broadband infrastructure projects. While the infrastructure bill contains some provisions that require a preference for the purchase of construction materials manufactured in the United States, it allows for waivers to purchase materials from foreign companies. 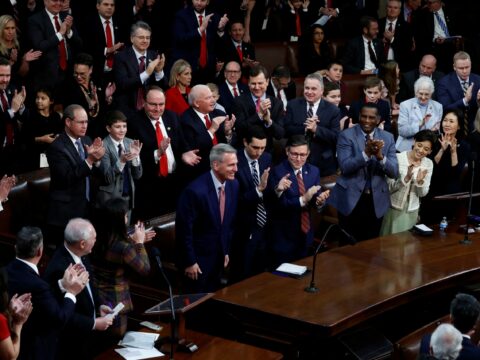 0 32
Kevin Can Wait: McCarthy Vows to Stay in the Race for House Speaker