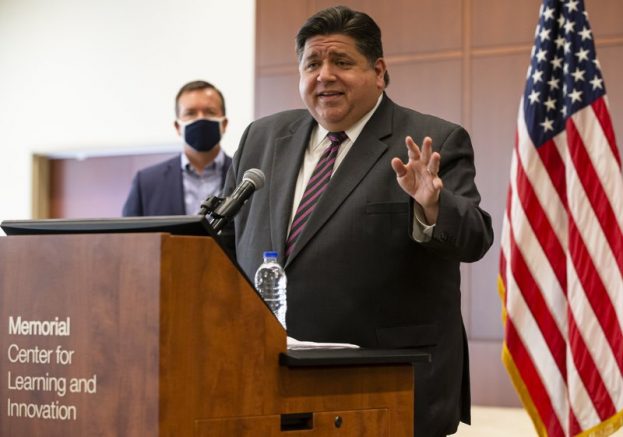 The wealthiest governor in the U.S. has announced his run for reelection in the Land of Lincoln. On Monday, Illinois Democrat Gov. J.B. Pritzker said he was inspired to run again in part because of his observations of healthcare workers during the pandemic.

“Part of why I’m running for reelection is because I watched the heroes across our state step up and do the right thing,” he stated. “We had so much to accomplish and we were able to do that together.”

We’ve been through a lot, and I’ve been so proud to see Illinoisans come together during the toughest of times. I’m excited to fight for the state I love with @JulianaforLG, and there’s no limit to what we can do going forward. pic.twitter.com/r5UXILlrb3

However, Pritzker’s governorship hasn’t been entirely smooth sailing. In November, voters rejected a graduated income tax that he personally advocated for.

Pritzker has been faced with numerous challengers in the Republican party for his seat. State Rep. Darren Bailey (R-Ill.) has been a long time Pritzker critic.

During the lockdowns in October, Bailey sued to end Pritzker’s emergency powers. Running for governor, Bailey expressed plans to reverse high gas prices and taxes, which he blamed Pritzker for letting get worse.

“Thanks to Pritzker’s gas tax increase, failed agenda, and lack of leadership, fuel is high and hope is low across Illinois,” he explained. “Friends, do not give up. We are in this fight with you.”

Friends, @JBPritzker and Illinois Democrats continue to fail hardworking Illinoisans. Thanks to Pritzker’s gas tax increase, failed agenda, and lack of leadership, fuel is high and hope is low across Illinois. But friends, DO NOT GIVE UP. We are in this fight with YOU! #twill pic.twitter.com/OtUWe0Dg7z

Bailey has not been alone in his fight to fire Pritzker from the governor’s mansion. The Trump-supporting self-made millionaire Gary Rabine threw his hat in the ring in March.

Promising pro-police and pro-business reforms to the state, Rabine said he wanted to take his home state in a new direction. He added the governorship was bought by Pritzker.

“J.B. Pritzker is a California trust fund billionaire who came here and bought our governorship,” he asserted. “It’s time to turn things around. I’m Gary Rabine and I’m formally announcing my run for governor of Illinois.”

Illinois can’t afford four more years of JB Pritzker
The last two and a half years have been a disaster for Illinois on JB Pritzker’s watch. Governor Pritzker has raised taxes, increased spending, and signed into law some of the most radical, far-left legislation in the nation. pic.twitter.com/VZobea2UUB

The final GOP candidate recently announced was Marine Corps veteran and former state Sen. Paul Schimpf (R-Ill.). He has promised to take on what he has seen as deep seated corruption in Illinois.

He added he hoped to use his military experience to unite Illinoisans across the political spectrum.

While Pritzker faces opposition from his left flank in the Democrat primary, he has been widely expected to be renominated for governor. If he goes on to win reelection, Pritzker would be the first incumbent governor to win reelection in Illinois since Democrat Rod Blagojevich in 2006.

failed to help overtaxed Illinoisans. In three years, JB Pritzker has demonstrated he has neither the vision nor the leadership skills to unite our state. Simply put, Illinoisans deserve better– they deserve a leader with commonsense who will renew our state. (2/2)

MORE NEWS: Gop Reps. Give Biden ‘Grade I’ For Inflation