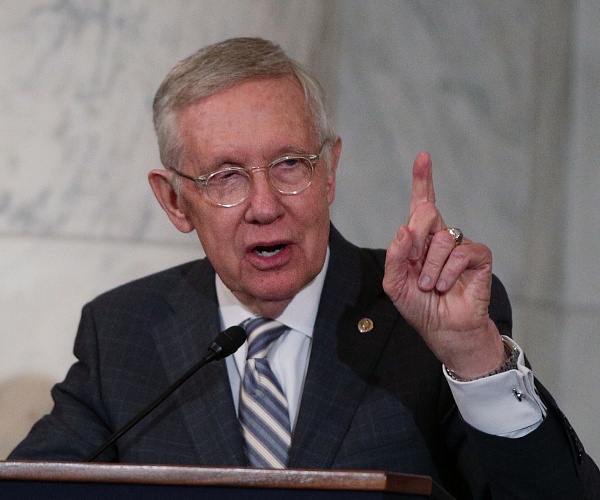 Former Senate Majority Leader Harry Reid, D-Nev., said he was glad he “blew the horn” on unidentified flying objects during his time in Congress.

The Office of the Director of National Intelligence and the secretary of Defense are scheduled to release a report later this month about UFO sightings.

The 81-year-old Reid, who retired from the Senate in 2017, was responsible for one of the first investigations into UFOs in 2007.

“I’m glad I blew the horn,” Reid told the Las Vegas Review-Journal. “I expect they are going to be fairly vague with what they come up with. We don’t have enough information now to be drawing conclusions.”

Reid said the report likely will increase public interest in UFOs and lead to more government research. He added the report, by the Unidentified Aerial Phenomenon Task Force, should not be “a one-shot deal.”

“The U.S. government should not stop investigations now,” Reid said in a telephone interview. “Are they a threat to national security? What’s the nature of the technology, and can the United States duplicate it?”

Although some Congressional members have expressed skepticism about the report, Rubio has said science and accounts by military personnel warrant examination.

“Anything that enters an airspace that’s not supposed to be there is a threat,” Rubio said.

The New York Times said officials briefed on the report said there was no evidence the UFOs were alien spacecraft. However, 120 sightings during the past 20 years were not U.S. aircraft or technology.

That conclusion basically rules out any secret government operations conducted by the American government, The Hill reported.

There are concerns the UFOs could be the result of Russia and/or China experimenting with hypersonic technology.

Two former Navy pilots told CBS News in May they sighted unidentified aerial phenomenon over the Pacific Ocean. The government found no evidence the sightings were alien.

Former President Barack Obama commented on UFOs in May saying there were aerial objects that “did not have an easily explainable pattern.”

“What is true, and I’m actually being serious here, is that there are, there’s footage and records of objects in the skies, that we don’t know exactly what they are. We can’t explain how they moved, their trajectory,” Obama said. “They did not have an easily explainable pattern. And so, you know, I think that people still take seriously trying to investigate and figure out what that is.”

In May, Reid told The New Yorker that Lockheed Martin, a leading aerial defense contractor, might have had fragments from a crashed unidentified flying object. He added the Pentagon did not permit him to see the evidence.

“I was told for decades that Lockheed had some of these retrieved materials,” Reid said.

“And I tried to get, as I recall, a classified approval by the Pentagon to have me go look at the stuff. They would not approve that. I don’t know what all the numbers were, what kind of classification it was, but they would not give that to me.”