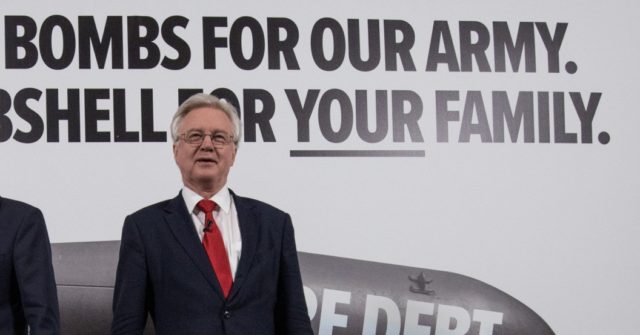 Senior British politician David Davis has called on the British government to “neutralize” Russian forces in Ukraine from the air, claiming that this would “reduce the risk of escalation”.

Davis, a leading backbench Member of Parliament, the government’s inaugural Secretary of State for Brexit, and a former party leadership contender, is not content with Prime Minister Boris Johnson’s announcement of “the largest and most severe package of economic sanctions that Russia has ever seen”, arguing that “[t]hey will not stop [Vladimir Putin].”

“If NATO does not act now, Ukraine will be defeated in a matter of days,” the 73-year-old asserted in a lengthy Twitter thread.

“Therefore if we do not provide military support, more than 40 million Ukrainians will go from living in a democracy to living under a brutal dictatorship,” he continued.

“It is far too late to get boots on the ground but it is not too late to provide air support to the Ukrainian army which may neutralize Putin’s overwhelming armoured superiority.”

Davis went on to argue that such an intervention, if “confined to the airspace over Ukraine, and… based on a request from President Zelenskyy” of Ukraine “should” be “perfectly legal under almost any interpretation of international law,” claiming that, in his opinion, it would “also reduce the risk of escalation.”

It is far too late to get boots on the ground but it is not too late to provide air support to the Ukrainian army which may neutralize Putin’s overwhelming armoured superiority.

Davis’s call for an air war with the Russian Federation did not meet with universal acclaim, with Poland-based British journalist Ben Sixsmith describing his proposal as “nuts”.

“We should rearm our military [and] make progress towards energy independence but sending our armed forces into a hot war involving a nuclear power isn’t just asking for trouble, it’s begging for it,” he warned.

Davis’s assertion that launching such a war would “reduce the risk of escalation” stands sharply at odds with President Putin’s direct warning to third countries that “anyone who would consider interfering from the outside… will face consequences greater than any of you have faced in history.”

“All relevant decisions have been taken. I hope you hear me,” the Russian leader added ominously.

Vladimir Putin Threatens ‘Consequences Greater than Any of You Have Faced in History’ if Outsiders Interfere in Ukraine https://t.co/2QZHDxbA1n

0 29
A Vermont City Cut The Police Budget. Now People Won’t Speak Out For Fear Of Being Called A ‘Racist.’