The state of Florida launched a lawsuit Tuesday against the Biden administration for its “illegal” catch-and-release policies, arguing it threatens the state’s “quasi-sovereign interests,” according to Fox News, which exclusively obtained a copy of the suit.

Florida Attorney General Ashley Moody filed the suit to “uphold the rule of law despite the Biden administration’s decision to violate the law,” according to Fox News.

“The Biden administration’s illegal border policies cause Florida harm,” the lawsuit reportedly reads. “Many of the aliens illegally released by the Biden Administration are arriving, or will arrive in Florida, harming the state’s quasi-sovereign interests and forcing it to incur millions of dollars in expenses.”

Moody alleges the administration is either abusing its power or is in violation of U.S. code 1225, which stipulates that individuals must be detained when they illegally enter the country or come through a port of entry. Under the code, the individuals cannot be freed until it is determined whether they are actually admitted into the nation, according to Fox News. For individuals claiming asylum they, too, must first receive a determination from a judge as to whether they are entitled to asylum before they are released, according to the report.

The exception to the rule gives the federal government “parole authority,” which allows illegal immigrants to be immediately released throughout the nation solely on a case-by-case basis for “urgent humanitarian reasons or significant public benefit.”

“The government is not free to ignore the clear commands of Congress,” the lawsuit reportedly alleges. “It has claimed that it lacks the resources and detention capacity to process the surge of migrants at the border.”

“Once people are released into the interior, the federal government may never find them,” Moody’s office reportedly said. The suit also alleges the administration “sought to eliminate measures that increase its resources and detention capacity,” such as the so-called ‘Remain in Mexico’ policy, according to Fox News.

The suit asks the court to “hold unlawful and set aside” the administration’s policy of “releasing arriving aliens subject to mandatory detention, of paroling aliens without engaging in case-by-case adjudication or abiding by the other limits on that authority; and of failing to serve charging documents or initiate removal proceedings against plainly inadmissible aliens who are being released into the interior of the United States.”

The suit was filed in the Pensacola Division of the Northern District of Florida and the Department of Homeland Security (DHS), Immigrations and Customs Enforcement (ICE), DHS Sec. Alejandro Mayorkas, other top immigration officials and U.S. Citizenship and Immigration Services are listed as defendants, according to Fox News.

Moody had previously sued the administration in March over Biden’s “reckless” immigration policies.

Mayorkas confirmed Sunday that at least 12,000 Haitian migrants who are illegally in the U.S. were released into the states from Del Rio, Texas. (RELATED: ‘Why Didn’t You Build, Forgive Me, A Wall?’: Chris Wallace Confronts Mayorkas On ‘Flood’ Of Migrants At The Border)

Mayorkas admitted the number could be even “higher” than his initial estimation but migrants are “monitored” by the department to “ensure their appearance in court as the law requires.”

Mayorkas said during a recent press conference roughly 12,400 Haitian migrants would have their cases heard by a judge rather than being immediately expelled under Title 42. Title 42 is a Trump-era public health order that expels most migrants from the U.S. If a migrant is determined to need immediate medical attention or state an asylum claim they aren’t subject to removal. If a judge determines a migrant doesn’t have a valid asylum claim they will be expelled.

Mayorkas said the reason why roughly 30,000 Haitian migrants who have crossed the border into Del Rio over recent weeks haven’t been stopped is that “we surged our resources, we surged our personnel.”

Several migrants who made it past border patrol were captured on video obtained exclusively by the Daily Caller’s Jorge Ventura sleeping outside the Del Rio airport awaiting flights to Florida. Ventura explained most migrants headed to the sunshine state believe they’re in the clear and don’t have plans to show up for their court hearings in 60 days.

Around 4 am – Haitian migrants released into the U.S sleeping outside the Del Rio airport awaiting flights to Florida. Migrants did not tell us who paid the flights. pic.twitter.com/xk4JaNMflc

Agents in the Del Rio area requested additional federal aid months before thousands of migrants showed up in the area. However, migrants flooded the area, setting up camp under the International Bridge.

President Joe Biden recently admitted his administration does not have the border “under control” but that “we’ll get it under control.” 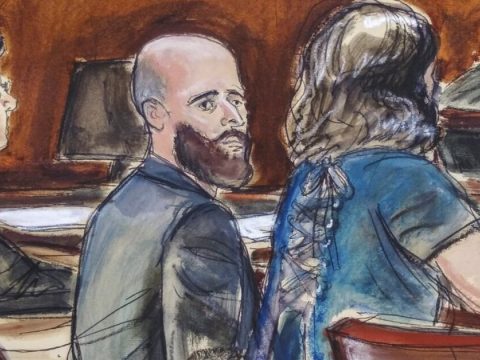