Speaking before a crowd of abortion rights activists in 2020 who were outside the court where justices were hearing a challenge to a Louisiana law that required abortion providers to have admitting privileges at a nearby hospital, Schumer threatened the justices.

Senator Schumer’s threat in 2020 on the steps of SCOTUS:

“Statements of this sort from the highest levels of government are not only inappropriate, they are dangerous. All members of the Court will continue to do their job, without fear or favor, from whatever quarter,” Roberts said, according to NBC News.

Schumer defended his comments, with a spokesman saying his remarks were referencing the political price Republicans will pay “for putting [Gorsuch and Kavanaugh] on the court,” according to NBC News.

The spokesman reportedly said Schumer was actually warning that “the justices will unleash major grassroots movement on the issue of reproductive rights against the decision.”

Several prominent left-leaning politicians have recently called for protests against the high court after Politico reported on a leaked draft opinion that would overturn Roe v. Wade.

“To my friends in the LGBTQ+ community – the Supreme Court is coming for us next. This moment has to be a call to arms.”

To my friends in the LGBTQ+ community—the Supreme Court is coming for us next. This moment has to be a call to arms.

“We will not surrender our rights without a fight – a fight to victory!” the mayor said. (RELATED: ‘Let’s Turn That Off’: Woman Says ‘F*ck Samuel Alito’ Live On Tucker Carlson)

Democratic Massachusetts Sen. Elizabeth Warren rallied pro-abortion activists outside of the court as well, telling protesters she is “angry because an extremist United States Supreme Court thinks that they impose their extremist views on all of the women in this country, and they are wrong.”

“We have reached the culmination of what Republicans have been fighting for decades now, and we are going to fight back!”

Amid the rhetoric and protests, the Senate unanimously passed a bill Monday extending police protection to Supreme Court justices’ families.

All copyrights and legal uses attributed to content are located at the article origination: Off the Press, FLASHBACK: Schumer Warned SCOTUS Justices They ‘Won’t Know What Hit’ Them If They Vote Wrong On Abortion 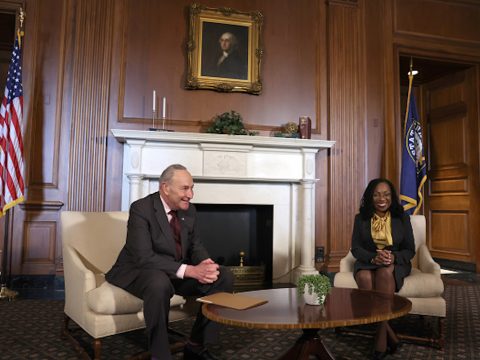