A civil rights complaint was filed with the U.S. Department of Education against an Illinois high school after it advertised an allegedly racially-segregated “students of color field trip opportunity.”

At issue is a flier advertising a filed trip in which ostensibly only “students of color” can participate. The field trip was for those students interested in becoming a teacher, which involved a “luncheon [to] discuss the importance of considering education as a career as a person of color.”

In a statement, the principal of Downers Grove South, Ed Schwartz, told me that the school planned the racially-segregated program to “provide the opportunity for students of color to be partnered with a group of teachers who look like them and have had similar life experiences.”

Downers Grove High School administrators claimed the trip was an “opportunity for all students” and that the flier “was created by a new staff member and the flier was immediately removed when we recognized that it could be misinterpreted that the field trip was not open to all students,” according to the Washington Times.

Despite that, several announcements from the school, published prior to PDE’s filing, have language that appears racially segregative. A December 16 announcement said, “If you are a student of color & you are interested in teaching, then this upcoming field trip opportunity is for you.” [Emphasis added]. 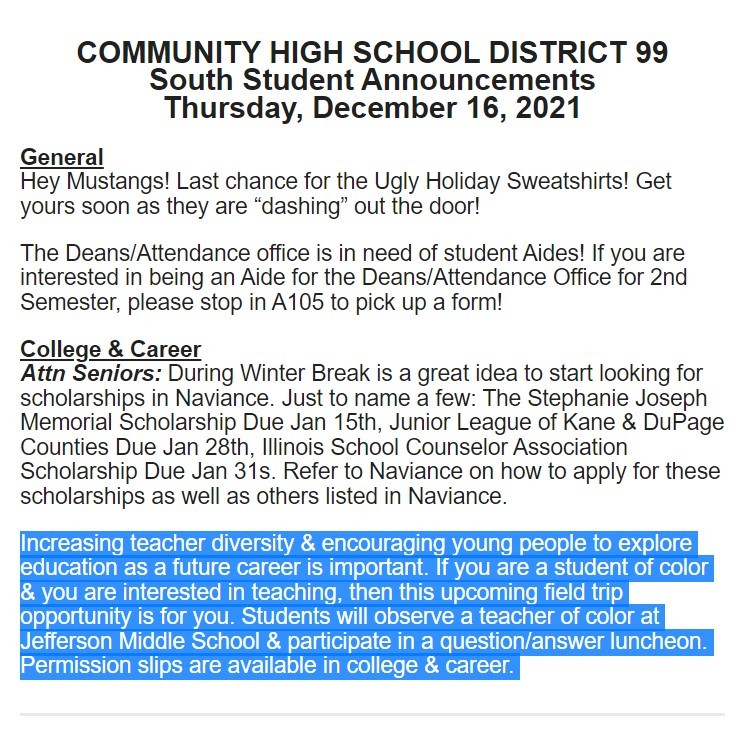 The announcement the following day, the day of the civil rights complaint filing, used the same terminology. On the school district’s diversity, inclusion, and equity page, they claim their “equity work dates back to 2013.”

This incident is only the latest in a series of schools across the country implementing racially segregated events.

As Breitbart News reported, PDE filed a similar civil rights complaint against Denver Public Schools because “one of its elementary schools hosted a racially segregated ‘families of color playground night.’”

While the school district insists that “all families are welcome to attend all of our events,” University of Denver constitutional law professor Dave Kopel asked, “Then why isn’t it called ‘Family Night’?”

“What if that sign had said ‘White Family Night’?” Kopel continued, “But then the school said, ‘Oh, people of color can come too.’”

Breitbart News has reported on multiple other racially segregated events, including two in Massachusetts designed to help students “process” the Kyle Rittenhouse verdict, another in Massachusetts — in which PDE filed a federal lawsuit — for hosting “affinity groups, and yet another in New York to discuss the question, “How do our racial identities influence our experiences?”

0 26
Trump says FBI would not let lawyers near areas

0 21
Exodus: Jews Once Again Forced into Exile from Beloved Odessa