Less than two weeks after the Biden administration ousted the top lawyer at the Equal Employment Opportunity Commission and censored her work on religious discrimination, the agency sent out an agency-wide email that included a quote from notoriously anti-Semitic author Alice Walker.

The email, flagged by a whistleblower within the EEOC and viewed by The Daily Wire, was blasted out on Tuesday to the about 2,000 employees at the EEOC, which works to enforce federal civil rights laws against workplace discrimination.

“As we celebrate the more visible ‘glass ceilings’ broken by our first female Vice President of the United States of America, Kamala Harris, we can look around and see women breaking barriers at every level and in every arena,” the email read. “Despite facing disproportionate challenges due to gendered violence, workplace harassment, health disparities, wage gaps, and food insecurity, women have overcome insurmountable odds to obtain equitable access and continue to move the needle forward in the direction of equal opportunity in employment and beyond.”

The email said this year’s event will celebrate, in particular, women in STEM fields, service, art, and law. The message also emphasized that the EEOC seeks to uplift women who set new workplace standards, “not just for women and girls, but for persons of all genders” in the country.

“‘Hope is a woman who has lost her fear.’ – Alice Walker” was tagged onto the end of the email.

Walker, an African American civil rights activist and author best known for her Pulitzer Prize-winning novel “The Color Purple,” has made many wildly anti-Semitic statements over the years, including at length in her writings.

One of Walker’s books, “The Cushion in the Road,” published in 2013, includes an 80-page section decrying Israel’s role in the Israeli-Palestinian conflict.

“Can people who hunger so desperately for what other people have ever have enough? One thinks of Hitler, of course, and Napoleon,” Walker writes, referring to Israel’s claim on land also claimed by Palestinians.

The Anti-Defamation League charged that the book is “replete with fervently anti-Jewish ideas and peppered with explicit comparisons between Israel and Nazi Germany,” noting that Walker describes Israel’s actions in the Israeli-Palestinian conflict as “genocide,” “crimes against humanity,” and “cruelty and diabolical torture.”

“She has taken her extreme and hostile views to a shocking new level, revealing the depth of her hatred of Jews and Israel to a degree that we have not witnessed before,” Abraham Foxman, then the ADL’s National Director, said in the weeks after the book was published.

In 2012, Walker said she would not allow “The Color Purple” to be translated into Hebrew because of her opposition to what she said was Israel’s “apartheid state.”

In 2018, The New York Times asked Walker, “What books are on your nightstand?” and she listed, “And the Truth Shall Set You Free” by the British conspiracy theorist David Icke, who has aired his opinion that a “small Jewish clique” is responsible for global events, and that the human race is run by reptilian aliens who shape-shift in order to appear human.

In January of 2019, Rep. Ayanna Pressley (D-MA), one of four prominent progressive congresswomen along with Rep. Alexandria Ocasio-Cortez (D-NY) who were nicknamed the “Squad,” apologized and condemned anti-Semitism after she was criticized for quoting Walker in a tweet.

Pressley apologized several days later in a pair of tweets.

“Unfortunately, I was unaware of the author’s past statements,” Pressley wrote. “I fully condemn and denounce anti-Semitism, prejudice and bigotry in all their forms – and the hateful actions they embolden.”

The EEOC’s email comes on the heels of the Biden administration’s abrupt firing of Sharon Gustafson, who made waves earlier this month when she penned a letter refusing the administration’s request that she resign from her position as general counsel at the EEOC. She was immediately fired, prompting questions about the legality of her termination, as well as a spirited condemnation of the president’s decision from one of Gustafson’s EEOC colleagues.

A report on religious discrimination that Gustafson spearheaded, a continuation of an Obama-era initiative, was censored and scrubbed from the EEOC website. A podcast in which she discussed the report’s findings was also taken down. Gustafson said she was accused of “trying to advance her agenda” with her remarks on the podcast.

0 24
Ron DeSantis: Extended Mask Mandate 'Is the Biden Equivalent of Continuing the Beatings Until Morale Improves'

0 24
Scalise: 'Voters Are Furious with All the Spending,' 'Tired of all the Inflation Already' 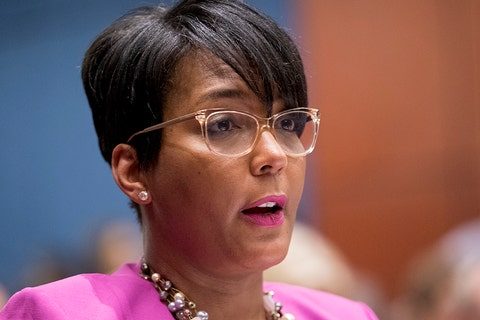