An image shared on Facebook claims Royal Dutch Shell’s “Mars / Olympus Deep Water oil platform has broken loose” of its anchoring in the Gulf of Mexico. 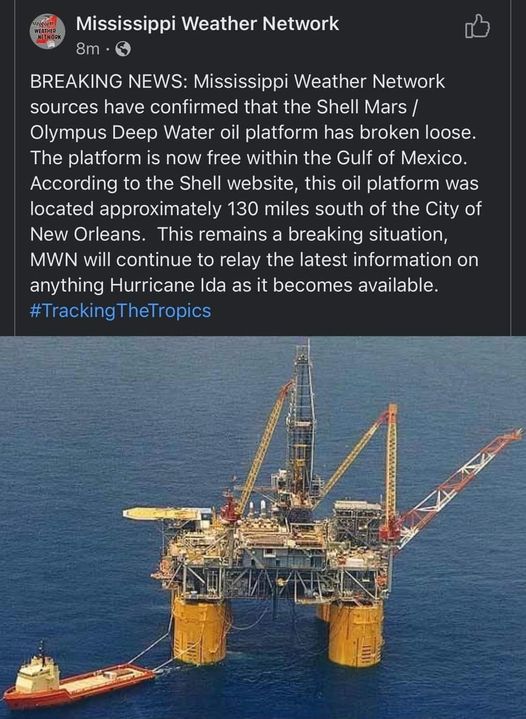 The platform remains in its usual location.

Oil companies paused over 90 percent of crude oil production in the Gulf of Mexico before Hurricane Ida made landfall in Louisiana on Sunday, the Houston Chronicle reported. Shell said in an Aug. 28 statement that it had “shut in production and evacuated all personnel from Ursa, Mars, Olympus, Auger, Enchilada/Salsa and Appomattox assets” as a precaution ahead of the category 4 hurricane.

The Facebook post features a screen grab of a “breaking news” alert that the Facebook page Mississippi Weather Network posted over the weekend. The page alleged sources had confirmed the “Shell Mars / Olympus Deep Water oil platform” had broken loose and was “free within the Gulf of Mexico.” (RELATED: Does This Image Show A Traffic Jam During Evacuations Before Hurricane Ida?)

The post’s claim, however, doesn’t hold up under scrutiny. In an Aug. 30 statement, Shell said it had conducted a flyover that “was able to confirm that Mars, Olympus and Ursa are all intact and on location.” The U.S. Coast Guard had previously reported “visual confirmation” that “Shell-operated Mars, Olympus, and Ursa platforms remain on location,” according to another statement from the energy producer.

The Mississippi Weather Network later deleted the Facebook post that made the claim. It wrote in an Aug. 29 post that its “report on a potential issue with an oil related vessel in the Gulf of Mexico has been completely redacted until further information can be verified by the oil company(ies) in question or U.S. government officials.”

None of the press releases put out by the Interior Department’s Bureau of Safety and Environmental Enforcement mentions the Shell deep-water oil platform becoming dislodged from its mooring in the Gulf. The facility originally started its oil production in 2014, according to Shell’s website.

0 1
‘She’s Peacocking’: Source Claims Whoopi Goldberg Is ‘Untouchable’ After Ratings Drop On ‘The View’ During Her Suspension