The Prime Minister of the East Turkistan Government in Exile Salih Hudayar urged Americans to make the 2022 Beijing Winter Olympics the least watched in history during an interview with Breitbart News on Monday as a sign that regular people care and are appalled by genocide.

The East Turkistan Government in Exile represents the people of that region, which the Chinese Communist Party currently occupies and refers to as the Xinjiang Uyghur Autonomous Region (XUAR). The people of East Turkistan – where the majority of China’s Uyghur ethnic minority resides, as well as members of other Central Asian ethnic groups distinct from the Han majority that governs Beijing – have faced decades of gruesome human rights abuses under the Communist Party, from reports of using political prisoners to harvest live organs to the systemic elimination of Islam, Uyghur language, and historic sites like mosques and cemeteries throughout East Turkistan.

The Uyghur community has been among the most vocal calling for the International Olympic Committee (IOC) to relocate the 2022 Beijing Olympics on the grounds that multiple governments, including the United States, have deemed China guilty of an ongoing genocide. Hudayar, speaking to Breitbart News, lamented that the IOC had “ignored” his organization’s requests to reconsider honoring China with hosting duties, foreign governments had disregarded calls for a true boycott of the Games, and athletes are proceeding with competing in the Olympics with no significant recognition of the crimes their presence is endorsing.

Having exhausted all those options, the East Turkistan Government in Exile is now appealing directly to sports fans, urging them to boycott the Games to send a message that allowing a genocidal tyranny to receive one of the highest honors in athletics is unacceptable. 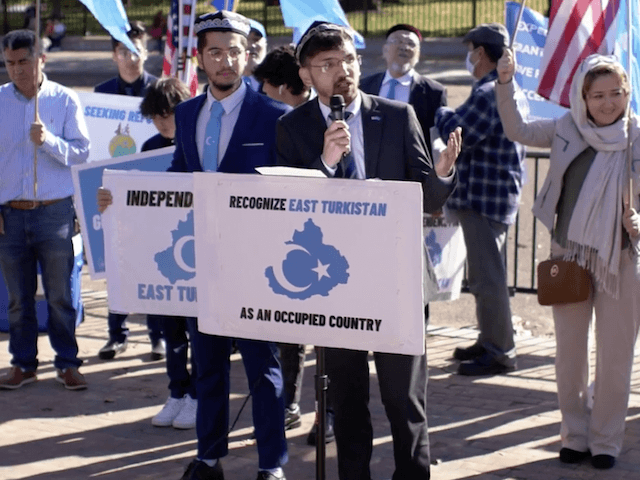 A successful viewer boycott, Hudayar told Breitbart News, will show “that people, average people, are concerned and they care about the ongoing genocide of Uyghurs, unlike what Chamath Palihapitiya and others, the elites like him, state, that ‘we don’t care’ or ‘nobody cares.’”

Palihapitiya, a billionaire part-owner of the Golden State Warriors, dismissively said in a podcast interview in January that “nobody cares” about the Uyghur genocide and that for him, personally, the use of over 1,200 concentration camps to erase Uyghur identity in East Turkistan was “below my line” of caring. In contrast, Palihapitiya listed “climate change” and “healthcare infrastructure” as issues worthy of more attention.

A boycott, Hudayar contended, that makes the Beijing Olympics the least watched in history will “show that people care and this will ultimately pressure governments to hopefully engage in stronger actions, more meaningful actions – tangible things that will actually benefit the people on the ground in East Turkistan.”

Hudayar noted that, the last time China hosted an Olympics ceremony, in 2008, the event preceded the ongoing genocide.

“We were deeply discouraged to see that China was even awarded the opportunity to host these Olympics despite the fact that it is carrying out an ongoing genocide,” Hudayar noted. “The last time China hosted the Summer Olympics, in 2008, it promised that it would make improvements in human rights and so forth – and none of those promises have been met. In fact, things have gotten much worse.”

Mihrigul Tursun, a Uyghur Muslim woman who became an activist after multiple stays at a Chinese concentration camp, told Breitbart News the harrowing details of her torture in these facilities before escaping to the United States. https://t.co/7HeaSmnSiw

“We encouraged governments to engage in a full boycott. Not just a diplomatic boycott – but a full boycott to where they don’t send anyone, including athletes. I know athletes have been training for this for years, but we are in a time of history that if we attend the Olympics, if any athletes attend the Olympics, they have ultimately chosen a side,” Hudayar said. “We tried reaching out to athletes across the world, especially even the U.S. Olympic team, and they ignored us. Governments, unfortunately, some governments implemented a small, weak diplomatic boycott while many governments completely ignored the issue.”

President Joe Biden’s administration announced the first major “diplomatic boycott” of the Olympics in December. A diplomatic boycott is not a boycott, as diplomats do not compete in Olympics sports. Even this half-measure, however, dissipated less than a month later when the State Department admitted it had applied for multiple visas to send diplomats to the Games.

The only country in the world that has announced a boycott of the 2022 Beijing Winter Olympics at press time is North Korea, whose officials claimed not attending the Games in China was somehow a protest of the United States. The IOC banned North Korea from the Olympics last year, anyway, rendering the attempted protest moot.

Hudayar drew parallels between the 2022 Beijing Winter Olympics and the 1936 Games held in Berlin on the eve of the Holocaust.

“The Nazis used the Olympics as propaganda to show off [their] ‘national prestige’ and then, shortly afterwards, the Nazis started to implement the Holocaust,” Hudayar noted, citing Nobel laureate and Holocaust survivor Elie Wiesel: “We must take sides. Neutrality helps the oppressor, never the victim. Silence encourages the tormentor, never the tormented. Sometimes we must interfere.”

Chamath Palihapitiya, the NBA team co-owner who told a podcast Saturday that “nobody cares” about the genocide of China’s Uyghur Muslim population, is a Democratic Party mega-donor. https://t.co/vl8301yRKN

The Chinese Communist Party has recently declared that it would allow U.N. High Commissioner for Human Rights Michelle Bachelet to visit East Turkistan, but only after the Olympics and under the surveillance of Beijing. Hudayar noted that the Nazi Germany government did something similar with the International Red Cross.

“The Chinese government has invited, or is going to allow, the U.N. human rights chief Michelle Bachelet to visit East Turkistan on the basis that it’s not an investigation. Only after the Olympics, though – that’ll only happen after the Olympics,” Hudayar noted. “If there’s not going to be an investigation – and when I say investigation I mean an unrestricted, uncensored investigation on the ground – if she doesn’t carry that out, then it’s going to be like the International Red Cross visiting Theresienstadt. How the Nazis took down all the wires and everything and made it look like it was some type of vocational training facility … this was in 1944.”

Succumbing to pressure following the deportation of Danish Jews to Theresienstadt, the Germans permitted representatives from the Danish Red Cross and the International Red Cross to visit in June 1944. It was all an elaborate hoax. The Germans intensified deportations from the ghetto shortly before the visit, and the ghetto itself was “beautified.” Gardens were planted, houses painted, and barracks renovated. The Nazis staged social and cultural events for the visiting dignitaries. Once the visit was over, the Germans resumed deportations from Theresienstadt, which did not end until October 1944.

Hudayar noted that the opening of the Beijing Olympics will come one day before the 25th anniversary of one of the bloodiest recent episodes in East Turkistan, the massacre of peaceful protesters in northwest Ghulja in 1997. 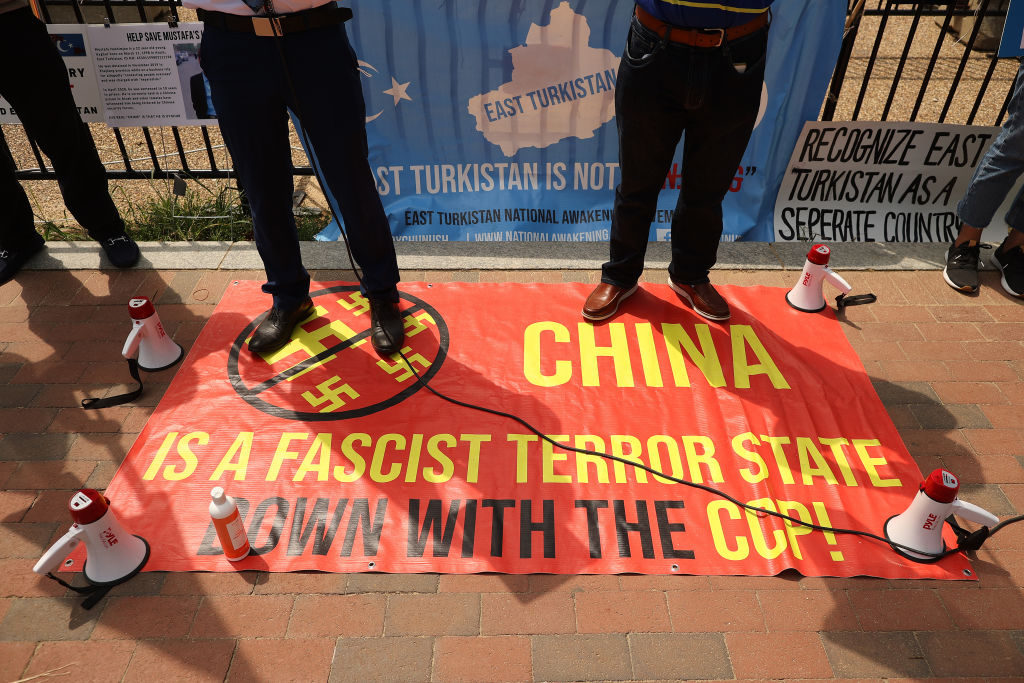 Supporters and members of the East Turkistan National Awakening Movement rally outside the White House to urge the U.S. to end trade deals with China and take action to stop the oppression of the Uyghur and other Turkic peoples August 14, 2020 in Washington, DC. (Chip Somodevilla/Getty)

While verifying the true death toll in a communist country is impossible, scholars estimate that thousands took the streets for peaceful protest against communist, about 1,600 were arrested, and hundreds killed.

“This is a cycle that keeps happening in East Turkistan,” Hudayar explained. “Every time that our people try to peacefully protest, we keep getting gunned down by the Chinese government. And so with this happening at the same time right after the opening of the Olympics, we hope that we can highlight this event and commemorate it by, again, boycotting the Olympics, by urging governments to undertake stronger actions.”