Christian, a Canadian truck driver who emigrated from Romania, told Breitbart News on Friday that his son is prohibited from playing hockey with other children because he did not receive a coronavirus vaccine.

“As a single parent, it’s so hard for me to put my kid through something which I don’t believe in,” he said. “I want him to have a childhood. I want him to be free, to go play hockey, to do the right thing as a child, not to say, ‘Oh, daddy, are you going to bring me to get my vaccine?’ because he wants to play.”

He continued, “It hurts me. It hurts me so bad when he says, ‘Daddy, when can I get my vaccine? Because I want to play with other kids.’”

Christian said people should be free to choose to take coronavirus vaccines, not coerced via mandates and punitive measures against those choosing not to receive them.

“Let people choose,” he said. “I’m not against it. Everybody should have a choice.” 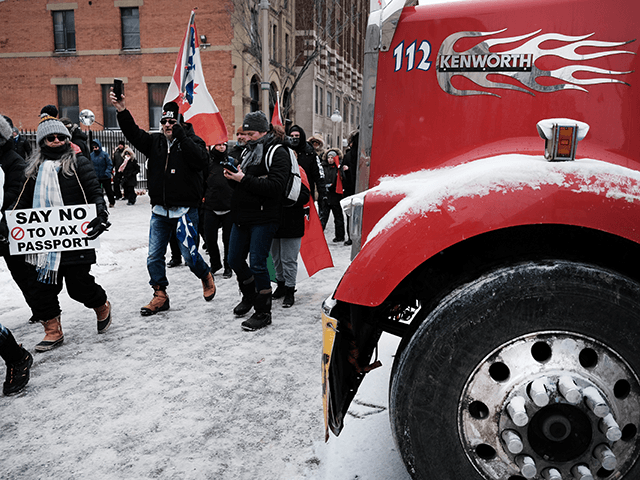 People gather along with truck drivers to block the streets during an anti-vaccine mandate protest in Ottawa, Ontario, Canada. (Photo by Spencer Platt/Getty Images)

Breitbart News spoke with Ottawa-based parents whose children were denied access to minor league hockey due to the children being unvaccinated due to Ontario’s provincial decree for coronavirus vaccinations among those partaking indoor activities designated by the province as “non-essential.”

Christian concludes, “We follow the constitution. We follow the laws, but that doesn’t mean we have to do anything [that] they say. It’s our bodies. It’s our choice.”

0 28
Pence: Help is on the way for law enforcement at border