Democrat House Speaker Nancy Pelosi is bottoming out in the eyes of Americans according to a GOP internal poll obtained exclusively by Breitbart News.

The leader of congressional Democrats has dropped double digits in approval rating since February per the latest National Republican Congressional Committee (NRCC) battleground survey results, a whole new low for Pelosi that further complicates Democrats’ efforts to pass President Joe Biden’s agenda and save their majorities in the U.S. House and Senate next year.

The results, obtained by Breitbart News, show that Pelosi has fallen to just a 36 percent approval rating across congressional battleground districts—with a solid majority of 57 percent of Americans disapproving of her performance. This October battleground poll, therefore, means she is 21 points underwater—a full 10 percent worse than she was in the NRCC’s February survey, when Pelosi was just 11 percent underwater.

“It is impressive that the least popular politician in the country has somehow managed to become even more unpopular,” NRCC spokesman Mike Berg told Breitbart News. “We are going to ensure voters know that Nancy Pelosi is the running mate for every vulnerable Democrat who backed her for Speaker of the House.”

Voters last November significantly cut into Democrats’ latest House majority, which they regained in the 2018 midterms during now former President Donald Trump’s administration, severing it down to a five-seat advantage over Republicans. A number of vulnerable Democrats have already abandoned their districts ahead of the upcoming 2022 midterm elections, signaling a likely GOP retaking of the U.S. House majority next year.

For example, Rep. Ron Kind (D-WI) announced retirement plans, Rep. Conor Lamb (D-PA) is running for U.S. Senate instead of holding his seat, Rep. Vicente Gonzalez (D-TX) has switched districts in Texas to run in a safer Democrat-held seat represented by the retiring Rep. Filemon Vela (D-TX) thereby essentially handing his current district to Republicans, and so and on and so forth across America. 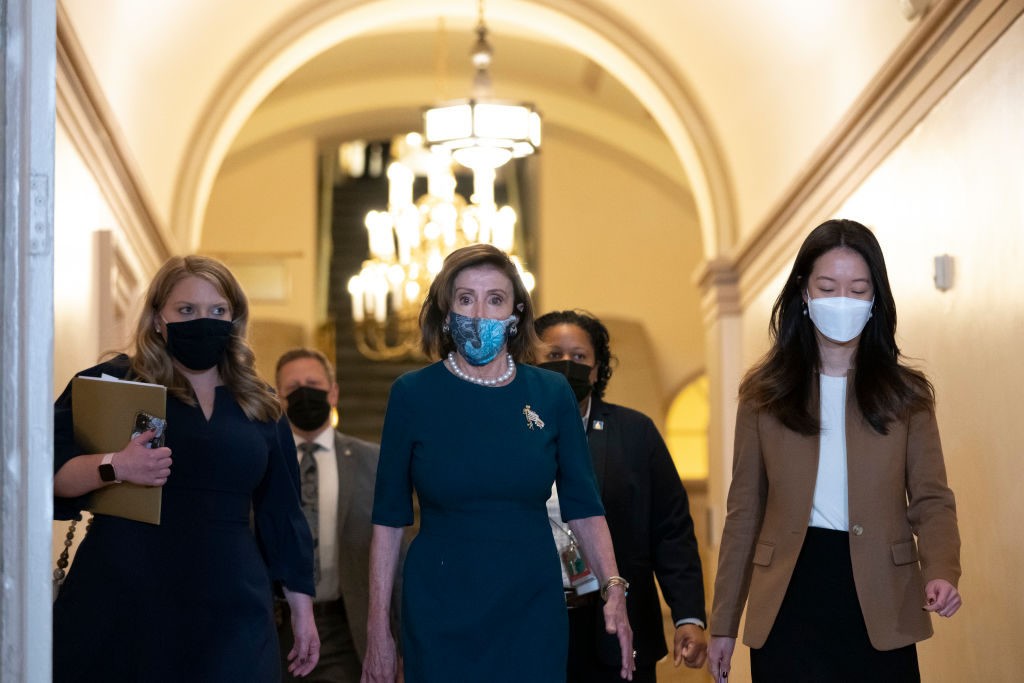 Speaker of the House Nancy Pelosi walks with staff after leaving a meeting with President Joe Biden and House Democrats at the U.S. Capitol October 28, 2021 in Washington, DC. (Drew Angerer/Getty Images)

Even Pelosi’s inner circle is uneasy about the upcoming midterms already, with House Democrat Whip Rep. James Clyburn (D-SC) saying this week—more than a year from next year’s elections—that he does not sense a will to win among Democrats.

“I’m not too sure that Democrats have yet developed the will to win in 2022,” said this week in remarks to the Charleston Jewish Federation. “I think we can. I’m not sure we will.”

Pelosi was previously Speaker of the House back during the end of former President George W. Bush’s second term and beginning of former President Barack Obama’s first term—losing the gavel in the 2010 midterm elections. Republicans led the House for the next eight years, until Pelosi and her Democrats regained it in the first midterm elections under Trump. Pelosi has been Speaker since January 2019, and oversaw two impeachment pushes against Trump and since then has led Democrat efforts to try to help force Biden’s agenda through Congress.

Despite her reputation as a master legislator, even Pelosi has struggled to get Biden’s plans through her chamber as Democrats from both sides of their party—and from both sides of Capitol Hill—express widening gulfs of disagreement internally on everything from the policy to the politics of getting stuff done.

Pelosi has attempted to, along with Senate Majority Leader Chuck Schumer and President Biden himself, this week rejuvenate Biden’s agenda and push a Senate-passed bipartisan infrastructure framework through the House as soon as Thursday. Leftist progressives have scuttled several previous efforts to pass the bill through the House, linking it forever to the broader Biden agenda vehicle through which Democrats aim to use a budget gimmick called reconciliation to pass it with just Democrat votes.

That move allows them to circumvent the Senate’s 60-vote filibuster threshold, but for it to work they need unanimous support among Senate Democrats and close to unanimous support among House Democrats. To this point, warring factions of Democrats—so-called moderates led by Sens. Joe Manchin (D-WV) and Kyrsten Sinema (D-AZ) and so-called progressives led by Sen. Bernie Sanders, a Vermont independent who caucuses with Democrats, and Congressional Progressive Caucus (CPC) chair Rep. Pramila Jayapal (D-WA)—have blocked Biden’s push for his agenda. 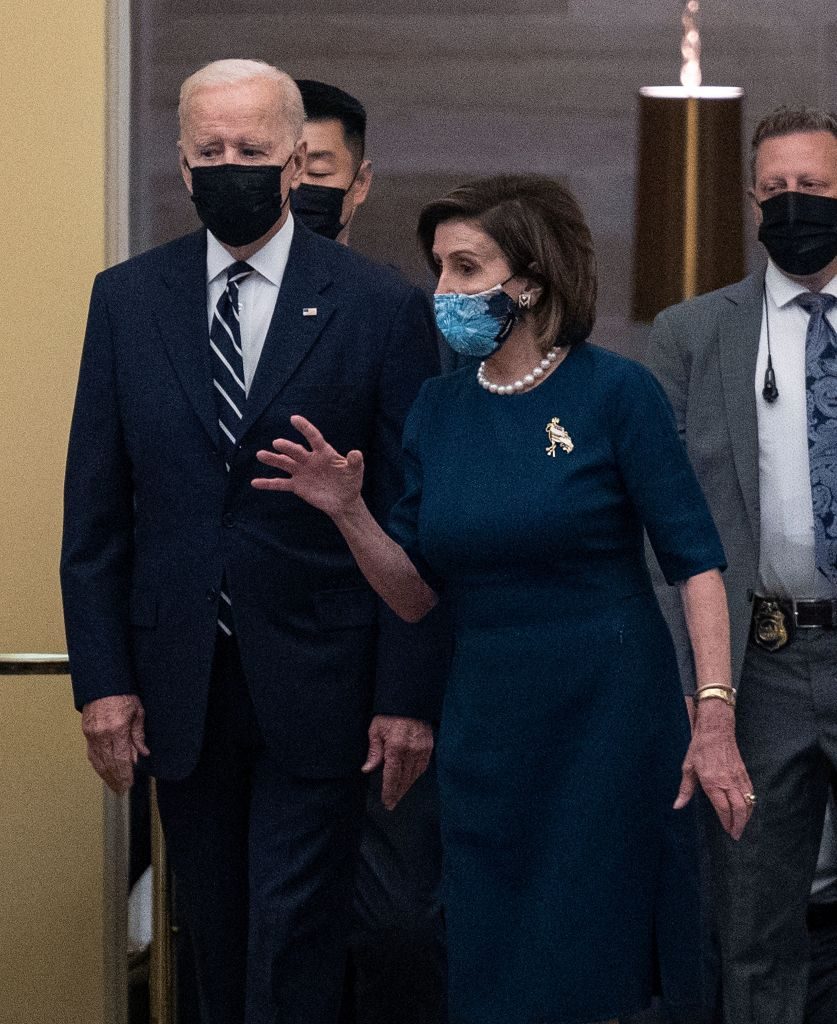 U.S. President Joe Biden and Speaker of the House Nancy Pelosi depart following a meeting with the Democratic caucus at the US Capitol in Washington, DC, on October 28, 2021. (JIM WATSON/AFP via Getty Images)

While most Republicans expect the Democrats will eventually get something through, previous high hopes among party leftist faithful for a New Deal-like or Great Society-like massive restructuring of American society and life seems unlikely. Nonetheless, Biden, in remarks to congressional Democrats on Thursday before he departed for a climate summit in Rome with world leaders, framed his scaled-back agenda as still bigger than both the transformational Franklin Delano Roosevelt (FDR) and Lyndon Baines Johnson (LBJ) programs combined. Selling that fallacy to the American public, however, falls more on Pelosi’s shoulders than Biden’s, and she has been reportedly urging Democrats to “embrace” the new drawn down Biden agenda as historic rather than a failure to get what they said would do done.

How the American people will judge Democrats—from Biden on down through Pelosi, Schumer, and the rest of the rank and file on Capitol Hill—will be ultimately decided a little more than a year away when Americans head to the polls in the midterm elections and decide whether the Democrats should retain their majorities in both chamber of Congress. With redistricting almost complete nationwide—Republicans did pick up some major advantages there and with reapportionment after the U.S. Census moved several seats from blue states to red states—and with an increasing number of Democrats running for the hills instead of for reelection to their current seats, the GOP seems to have the edge in the U.S. House as it stands right now.

With Virginia’s governor election looming next week, a win by GOP businessman Glenn Youngkin would likely send more Democrats into hiding—but polls there remain tight and it is unclear what will happen. On the U.S. Senate side of things, Republicans need to net just one extra seat to retake their majority in that chamber—and polls from everywhere from Georgia to New Hampshire to Nevada to Arizona seem to indicate energy on the GOP side. However, Republicans need to hold a lot more battleground states like Pennsylvania, Florida, Wisconsin, Ohio, and North Carolina—many with retiring Republican incumbents—to have a shot at flipping the Senate. 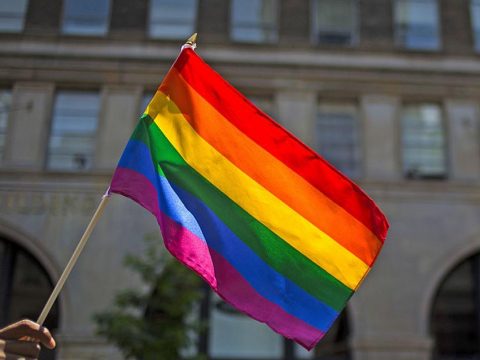