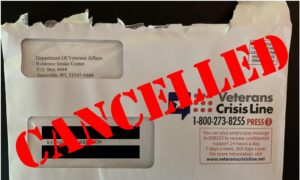 ‘This is what you have when vindictive leftists get in charge of major parts of the government’: Rep. Gohmert

Just when the wife of one incarcerated Jan. 6 prisoner believed things couldn’t get worse, the Department of Veterans Affairs (VA) informed her they are going to suspend all of her husband’s benefits. According to United States Representative Louie Gohmert (R-Texas), “this is what you have when vindictive leftists get in charge of major parts of the government.”

In an unsigned letter from the VA—dated June 13 and appearing to originate from the “Director Regional Office,”—Angel and Kenneth Harrelson were notified that the administration “received information from the United States Department of Justice” that Kenneth had been “indicted and charged with Seditious Conspiracy (18 U.S.C 2384).”

Page 1 of the unsigned letter received by Angel and Kenneth Harrelson from the “Director Regional Office” “informing them that their Veterans Benefits are being suspended due to 38 U.S. Code § 6105 – Forfeiture for subversive activities, which requires that an individual be “convicted” of a listed crime, not “indicted.” (Courtesy of Angel Harrelson)

The letter further noted that: “Pursuant to 38 U.S. Code § 6105(a)”—Forfeiture for subversive activities—”after receiving notice of an indictment for the above offense” the “VA must suspend payment of gratuitous benefits pending disposition of the criminal proceedings. If convicted, gratuitous benefits are forfeited, automatically, from and after the date of the offense.”

“Based on the information above,” the VA further informed the Harrelsons that they “propose to suspend” their “compensation benefit payments effective September 1, 2022, which is the first day of the month following a 60-day due process period.”

“If you are subsequently acquitted of this charge, payments can be resumed from the date of suspension, if otherwise in

All copyrights and legal uses attributed to content are located at the article origination: © The Epoch Times, EXCLUSIVE: DOJ Has VA Suspend All Benefits of Jan. 6 Prisoner

0 8
EXCLUSIVE: ‘Pray for His Conversion’: Here’s What US Catholics Want Out Of Biden’s Meeting With Pope Francis

0 5
Attorney Representing Mother Of Hunter Biden’s 3-Year-Old Daughter: ‘I Expect Him To Be Indicted’