The 27 EU countries have been stuck over an oil embargo on Russia for several weeks, with countries such as Hungary, Slovakia and the Czech Republic blocking the measure. Any sanctions imposed by the EU need to have the approval of all the 27 member states in order to be implemented.

“I hope we are talking about days. So what we are looking at is one or two member states that are landlocked, so cannot have oil via the sea and need alternatives in pipelines and in refineries, and there we are trying to find solutions,” von der Leyen said on the sidelines of the World Economic Forum.

“We are working on the oil embargo very hard,” she added.

The EU decided to block imports of Russian coal last month, but imposing restrictions on oil has proven a much more complicated task. Countries that are highly dependent on Russian fossil fuels are concerned about the implications of such measures for their own economies.

Hungary, for example, is reportedly asking for financial support between 15 billion and 18 billion euros ($16 billion to $19 billion) to move away from Russian energy. Hungary will also reportedly refuse to discuss the matter at an upcoming EU meeting later this month.

The stalemate over oil also raises questions about whether the bloc will be able to end purchases of Russian natural gas, which is the main fossil fuel that the EU buys from Russia.

The topic of energy security has been a concern for many European politicians for awhile, but it has garnered even more attention since Russia’s unprovoked invasion of Ukraine.

Speaking on the main stage of the World Economic Forum on Tuesday, von der Leyen said there is no doubt that “we are witnessing how Russia is weaponizing its energy supplies.”

The Kremlin has demanded that “unfriendly nations,” such as EU countries, pay for Russian gas in rubles. Poland and Bulgaria — two EU nations — saw their Russian gas supplies halted earlier this year after refusing to pay for the commodity using the Russian currency.

In recent days, there has talk about seizing Russian assets to fund the reconstruction efforts in Ukraine.

The EU’s top diplomat, Josep Borrell, is one of a growing number that want to use frozen Russian reserves for that purpose. And von der Leyen has said that the EU’s legal team is already on the case.

“There is a feeling all over the world that also Russia should be part of the reconstruction effort and we are looking into legal ways and means now to seize, partially, assets either of the oligarchs, depends what role they played, or of the Russia government.”

“As I said it is not trivial, but if the whole world is standing up to support Ukraine, to raise from the ashes, also Russia should give its fair share,” she said. 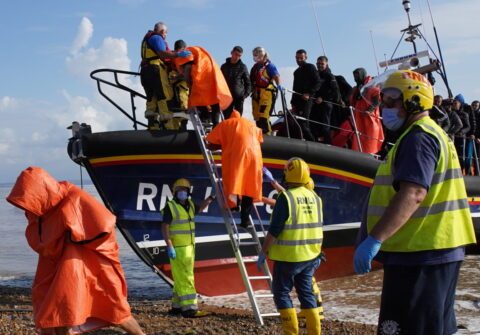 0 54
More Than 25,000 Illegal Boat Migrants Have Landed in Britain This Year

0 19
Biden’s Bureau Of Land Management Nominee Was Connected To Tree Spiking. What Does That Mean?