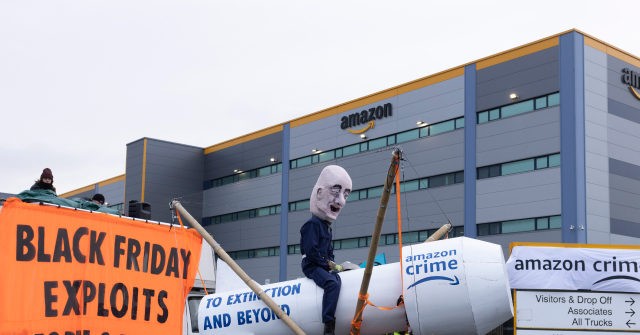 Climate crazies Extinction Rebellion blockaded a number of Amazon warehouses in the UK on Black Friday, the company’s busiest day of the year.

Thirteen Amazon warehouses in the UK were targetted by Extinction Rebellion, in an attempt to disrupt the retail giant’s busiest day of the year and protest against the supposedly environmentally damaging practices of Amazon.

The group began its blockade of Amazon’s largest warehouse in the UK in Dunfermline, Scotland, at 4 am on Friday, according to a report from The Telegraph.

Protesters prevented lorries from leaving the site, as well as some from entering through the use of placards, and by using so-called “lock-ons” — devices that are designed to prevent protesters from being removed.

Extinction Rebellion claimed that every Amazon distribution centre in the UK would be targeted by the organisation, with similar protests also occurring in the US, Germany, and the Netherlands.

Over 31 XR activists were arrested at Amazon warehouses across the country on Black Friday, the BBC reported.

A spokeswoman for the far-left climate alarmist group at the Dunfermline blockade stated that they were being watched by police, who reportedly had a single van on-site. She also stated that the group had brought “good vibes and music”.

“The action is intended to draw attention to Amazon’s exploitative and environmentally destructive business practices, disregard for workers’ rights in the name of company profits, as well as the wastefulness of Black Friday,” another spokesman for the group stated.

Police have made a number of arrests as they disperse the Extinction Rebellion protesters, who’ve been demonstrating outside the Manchester Airport Amazon depot this morning #HeartNews pic.twitter.com/k9Jyl7lZA0

The tactics employed by left-wing climate protesters have come under increased scrutiny after an XR splinter group, Insulate Britain, used similar methods to cause chaos in September and October.

Activists frequently glued themselves to the tarmac in order to maximize disruption during attempts to shut down major roads and motorways, such as the M25.

Nine of the group’s eco-warriors were subsequently jailed for violating a court injunction that prohibited the blockading of roads.

On social media, Extinction Rebellion claimed that they are “trying to wake people up to reality” with the blockades and that in order for governments to act on climate change, “mass disruption” and “civil resistance” are required.

“There’s no guarantee it will bring the change we need, but after COP26, it should be obvious that nothing else will,” one post stated.

0 9
REPORT: Several Arrested While Protesting Outside Of SCOTUS 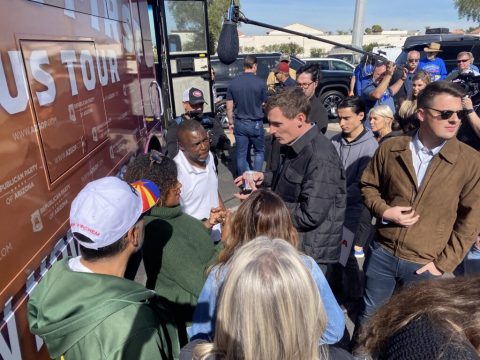