Congress is probing the Biden administration over its decision to grant a U.S. visa to an Iranian national tied to Iran’s terrorist fighting force and its former leader, Qassem Soleimani.

Rep. Jim Banks (R., Ind.), a member of the House Armed Services Committee, is asking the Biden administration to explain why it granted a visa to Iranian actor Parviz Parastui, according to a copy of the investigation letter obtained by the Washington Free Beacon. The lawmaker says Parastui has an “overt connection” to the Islamic Revolutionary Guard Corps (IRGC), the U.S.-designated terror organization responsible for killing scores of Americans.

Parastui was permitted to attend a film screening event in Los Angeles late last month that was organized by the far-left anti-Israel group Code Pink. While attending the event, Parastui was caught on camera assaulting an Iranian dissident who challenged him on the regime’s human rights abuses. Parastui’s ties to the hardline regime and support for Soleimani—which includes signing a 2020 letter by Iranian leaders condemning the Trump administration’s assassination of the terrorist leader, who they referred to as a “martyr”—should disqualify him from entering the United States, according to Banks and former top U.S. officials who spoke to the Free Beacon about the situation.

Parastui’s visit comes amid active threats by Iran and the IRGC to assassinate U.S. officials, including former secretary of state Mike Pompeo. It also comes as the Biden administration mulls lifting the IRGC’s terror designation as part of a package of concessions to Iran meant to entice it into signing a new version of the 2015 nuclear accord.

“Parastui has been directly involved in IRGC-funded propaganda projects, promoting a hardliner ideology that seeks to shape Iran’s culture to the agenda of the Iranian regime,” Banks wrote in a letter to Secretary of State Antony Blinken and Homeland Security secretary Alejandro Mayorkas. “He played roles in numerous pro-regime and pro-IRGC films. Parastui also never shies away from expressing his affinity with the IRGC in public.”

In a statement to the Free Beacon regarding Parastui’s entry into the United States, the State Department said, “Visa records are confidential under U.S. law; therefore, we cannot discuss the details of individual visa cases.”

Parastui vocally supported Soleimani, praising him in television interviews, and is seen in photos meeting with the terror leader and other senior IRGC figures, highlighting “just how close he is to key figures in the terrorist organization,” according to Banks.

Banks maintains that the State Department’s decision to grant Parastui a visa undermines U.S. efforts to isolate the hardline Iranian government, the IRGC terror group, and the country’s jihadi proxy organizations, which continue to conduct attacks on American outposts in the region. It also could help Iran trigger terrorist cells based in America, according to Banks.

“Your departments have allowed notorious, high-profile affiliates of the IRGC into our country even before the [IRGC] is delisted,” Banks wrote. “I can only imagine how members of the IRGC could rush to the United States legally to exploit our market and financial system and carry out terrorist activities against the United States, if the IRGC is indeed delisted.”

The lawmaker asked the State Department and DHS to respond no later than May 20 and explain the process that led to Parastui and his entourage obtaining visas. This includes the name or names of those involved in approving the visas.

“What vetting procedure do you have in place to ensure that supporters or defenders of Iranian terrorism will not be admitted into the United States?” Banks asked.

Banks also wants to know if the State Department reviews social media posts from visa applicants “to evaluate their potential ties to the IRGC and other Iranian terrorist groups.”

“Is IRGC affiliation a criterion in evaluating whether an alien can be granted U.S. permanent resident status?” Banks asked in the letter. “What steps are you taking to ensure that Iranian agents—particularly those seeking to assassinate US officials—are not masquerading as ordinary Iranians requesting tourist visas?”

Banks also asked the State Department to provide detailed information on its efforts to counter Iranian disinformation and propaganda. Iran was cited as one of several adversarial regimes, including Russia, that attempted to sway the results of the 2020 presidential election.

Gabriel Noronha, a State Department special adviser for Iran during the Trump administration, questioned the decision to grant Parastui a visa.

“It’s deeply concerning that the State Department is granting visas to Soleimani sympathizers while the regime has repeatedly proclaimed it is trying to kill U.S. officials in revenge for Qassem Soleimani,” Noronha told the Free Beacon. “If they can’t do basic vetting now, it’ll get far worse if they lift visa sanctions on the hundreds of thousands of IRGC members. They don’t seem to have any plan to prevent even worse terrorists from coming into our country.”

Ellie Cohanim, who served as the State Department’s deputy special envoy to monitor and combat anti-Semitism during the Trump administration, warned that Iran’s hardline allies could stir up trouble once inside the United States.

“At a time when Secretary Blinken testified to Congress that the Iranian regime is posing ‘an ongoing threat against American officials, both present and past,’ it is unconscionable that the Biden State Department issued a visa to an IRGC associate like Parviz Parastui,” Cohanim said. “Parastui is here ostensibly on a film tour but is there any way to know whether he is here to activate a sleeper cell? Or pass on messages to Iranian nationals who reside in the U.S.? Why at a time when U.S. government officials are under threat would the Biden administration allow onto U.S. soil an Iranian regime apparatchik like Parastui?” 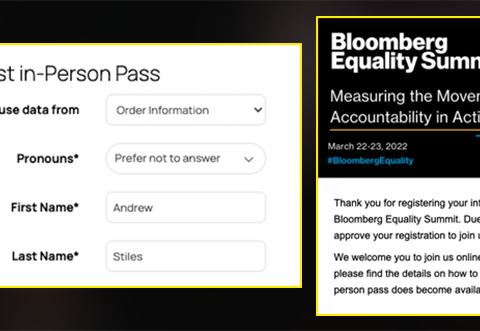 0 92
‘Advancing Equity and Inclusion in a Deep Turd World’: What I Learned at the Bloomberg Equality Summit

0 65
Let Kids Be Kids: DeSantis May Use Child Safety Laws To Ban Drag Shows in Florida