Chipotle has reportedly begun testing the use of an AI-driven robot named Chippy which is tasked with creating the company’s tortilla chips in place of human employees.

Forbes reports that Chipotle has announced a test with Miso Robotics to utilize an AI-driven robot named Chippy to produce its tortilla chips. Chippy will be tested at the Chipotle Cultivate Center in Irvine, California, for the duration of the trial.

MIAMI, FL – MARCH 05: A restaurant worker fills an order at a Chipotle restaurant on March 5, 2014 in Miami, Florida. The Mexican fast food chain is reported to have tossed around the idea that it would temporarily suspend sales of guacamole due to an increase in food costs. (Photo by Joe Raedle/Getty Images) 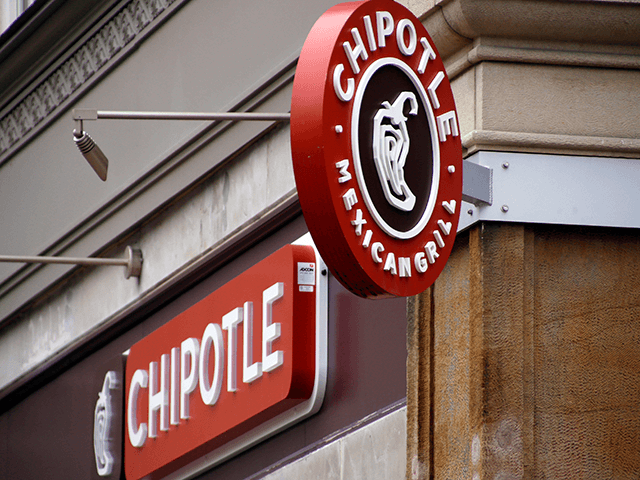 The marquis signs for the Chipotle restaurant in Pittsburgh’s Market Square are seen on the glass doors, Monday, Feb. 8, 2016. A sign on the door indicated they will be closed for lunch and opening late due to an employee meeting,(AP Photo/Keith Srakocic)

Chippy is able to replicate Chipotle’s exact tortilla recipe which includes corn masa flour, water, sunflower oil, salt, and lime juice. Following the initial test, the company plans to trial Chippy integrated into a Chipotle restaurant in Southern California later this year. The company will then take feedback from employees and customers and consider a wider rollout.

Chippy is the first and (so far) only robot that utilizes artificial intelligence to make tortilla chips.  Miso Robotics is not only developing robots to make tortilla chips, however. Breitbart News previously reported on the burger chain White Castle’s implementation of the company’s Flippy burger-flipping robots which have been fitted at more than 100 locations.

Miso’s Flippy Wings robot is also being tested at Inspire Brands’ Buffalo Wild Wings. Saladworks has also been working with Chowbotics to develop a salad-making robot called Sally, while Jamba has begun working with Blendid to create automated smoothies.

0 17
Report: Joe Biden Releases More than Half a Million Border Crossers into U.S.