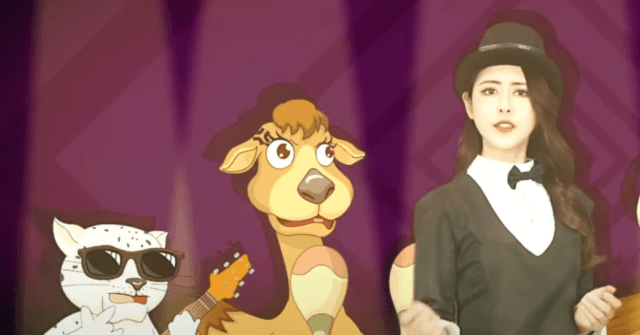 The Chinese Embassy in France has put out a song attacking American democracy, in a move that has sparked confusion and mockery online.

The Chinese embassy in France has become embroiled in an online storm of puzzlement and mockery after it uploaded a video mocking American democracy to its social media.

Titled “It is Ameri-cracy!”, the video stars a woman and an entourage of musical-instrument-playing cartoon animals, all singing about how the United States is bad and hypocritical.

During the song — which is a parody of the Wellerman, a recently viral New-Zealander sea shanty — the cartoon animals denounce the US as being a country where “money talks”, with the chorus calling for a “democracy of our own” that reflects “culture, will and soul”.

The video has been panned online, with many mocking the production for its bizarre framing and stilted lyrics.

Other comments under the video simply took the opportunity to remind China that Taiwan is a country, as well as post pictures of the Tiananmen Square protests and Xi Jingping lookalike, Winnie the Pooh.

While the video — in which a sunglasses-wearing snow leopard makes the sign of the horns while playing electric guitar — went viral after being posted by the Chinese embassy, the video seems to originate from a Chinese media agency.

The video appears to originate from the “Deer Show“, a news satire show along the lines of “Last Week Tonight with John Oliver“, which is published by Xinhua News, China’s official state-run press agency.

Along with targeting American democracy, the English-language show has previously covered topics such as the lab-leak theory and the US withdrawal from Afghanistan.

While Deer Show seems to dedicate a lot of its time to bashing the United States, its use of music to do so is far from unique, with Chinese media outlets having repeatedly put out music and raps attacking America in the past.

One recent example is a track put out by rap group “CD Rev” titled “Drop the Beat! OPEN THE DOOR TO FORT DETRICK!”.

The rap, which was praised by propaganda outlet the Global Times, backs a Chinese conspiracy theory that the actual origin of the Wuhan Coronavirus is a US Army Facility located in Maryland.

Another song put out in recent years by China titled “Trade War!” focused on the ongoing China-US trade war.

The song, which is a re-work of another patriotic anthem from the 60s, boldly declares that China is ready to beat any would-be enemy “out of his wits!”.

That being said, these two examples do not quite capture the unoriginality of the Deer Show song, as not only is the song not the first time China has used music to mock the US, it isn’t the first time a version of the Wellerman was used to mock American politicians.

A video titled “Obama sings the Wellerman Sea Shanty with friends“, uploaded in February of this year, features a deep-faked Trump, Obama, Biden and Bernie Sanders all singing along to the New-Zealander tune as a ship sails about in the background.