The PLAAF has specifically ordered its J-20s to conduct “combat patrols” in the East and South China Seas designed to “safeguard China’s airspace security and maritime interests” in the bodies of water, Ren Yukun told reporters at a press conference on April 12.

Ren heads the discipline inspection and supervision team and is a member of the leading Chinese Communist Party group at China’s state-owned Aviation Industry Corporation of China (AVIC), which domestically manufactures the PLAAF’s J-20s.

The independent island nation of Taiwan, which Beijing claims is a territory of China, is located at the nexus of the East and South China Seas. China’s ruling Communist Party has repeatedly threatened to “reunify” Taiwan, which lies off China’s southeastern coast, with the “mainland,” i.e. China.

These threats have translated to belligerent military drills by the PLAAF, which regularly orders air sorties to penetrate Taiwan’s Air Defense Identification Zone (ADIZ) as a form of intimidation.

Taiwan’s location along the East China Sea’s southern rim places it a short distance southwest of Japan’s Senkaku islets. Like Taiwan, Beijing claims the Senkakus as its own territory and has increased its military presence near the small, uninhabited islands in recent months. 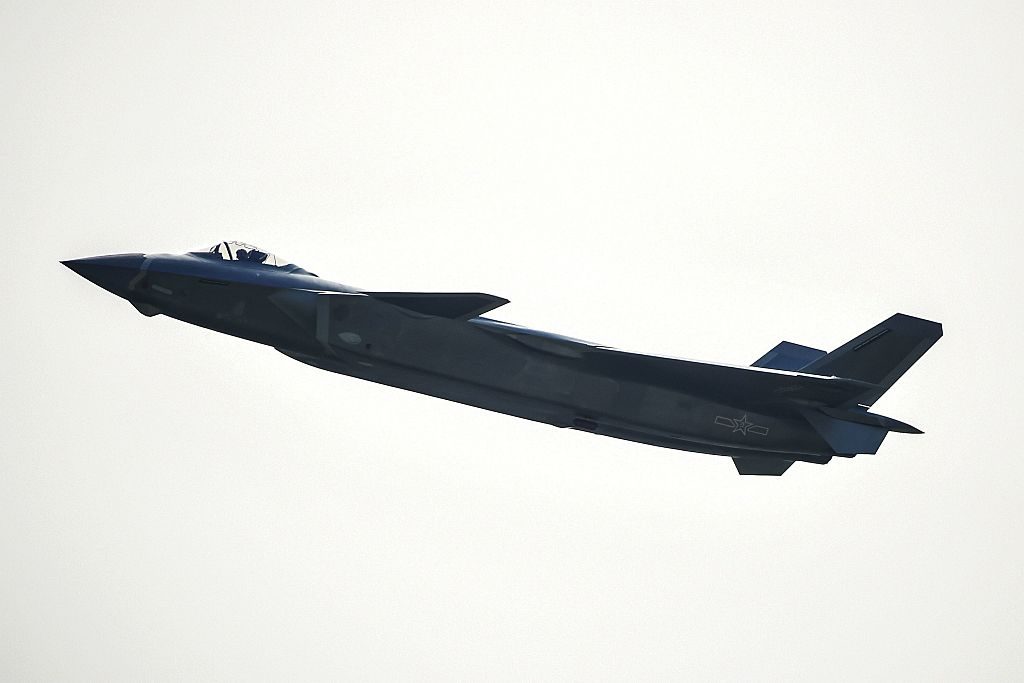 A J-20 jet in profile as it performs at Zhuhai Air Show in Zhuhai, south China’s Guangdong province on November 1, 2016. (STR/AFP via Getty Images) 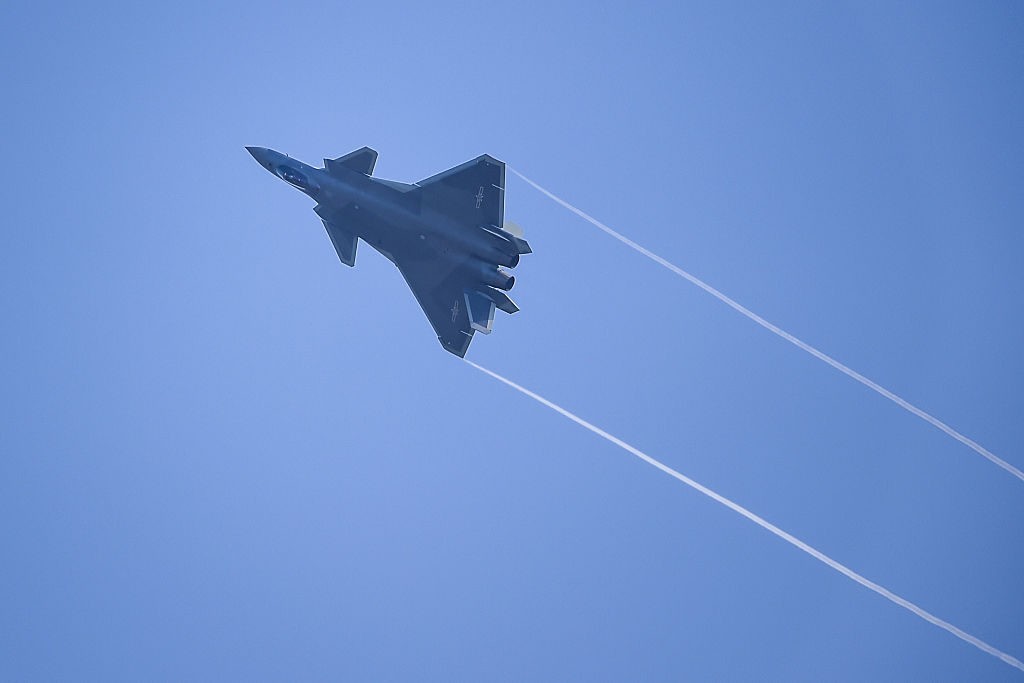 “The People’s Liberation Army (PLA) Air Force shoulders the sacred duty of defending national security in China’s airspace. It must be emphasized that when it comes to defending national sovereignty and security, the PLA will always be ready and capable of wielding its sword,” Senior Col. Wu Qian, a spokesman for China’s Ministry of National Defense, said at a regular press conference on March 31.

Col. Wu spoke in response to questions about an encounter earlier in March between a number of PLAAF J-20s and U.S. Air Force F-35 stealth fighter jets over the East China Sea. U.S. Pacific Air Forces commander Kenneth Wilsbac confirmed the incident during an online discussion with military aviation experts on March 17 hosted by the Mitchell Institute for Aerospace Studies.

“They are flying it [J-20s] pretty well. We recently had – I wouldn’t call it an engagement – where we got relatively close to the J-20s along with our F-35s in the East China Sea,” Wilsbach said during the virtual forum. 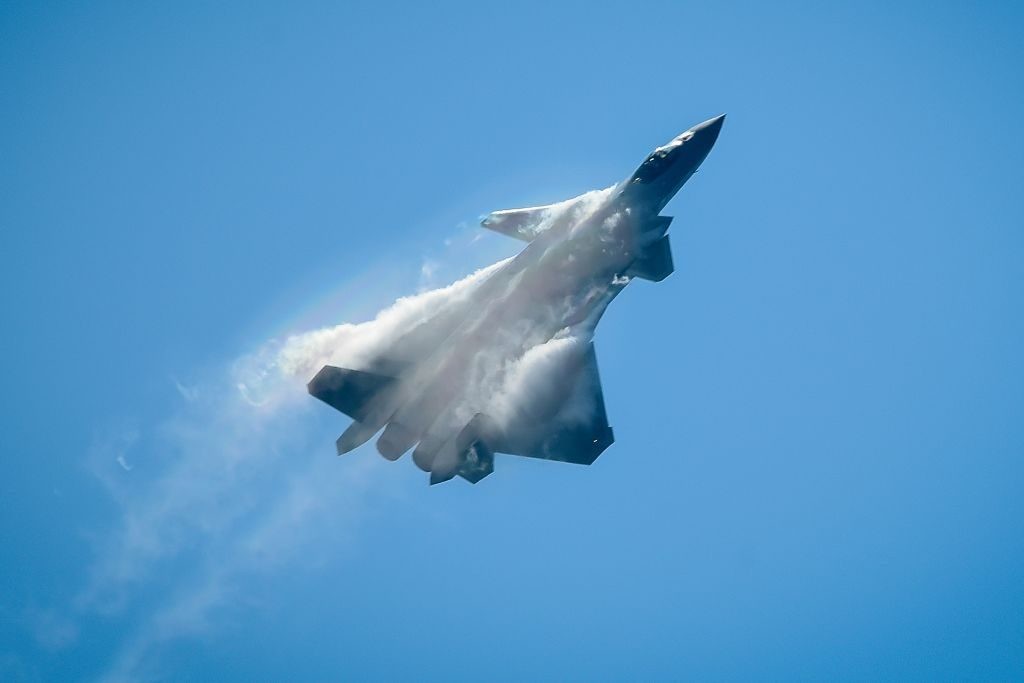 He noted that the U.S. pilots involved in the face-off were “relatively impressed” with the PLAAF’s “command and control” of the J-20s.

“It’s still too early to tell exactly what they intend to do with [the J-20] – whether it’s going to be more like an F-35 … that is primarily an air superiority fighter that has an air-to-ground capability,” Wilsbac said. 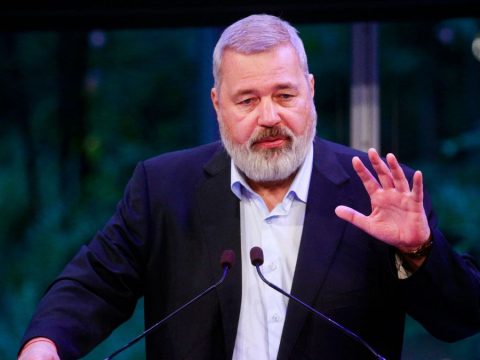 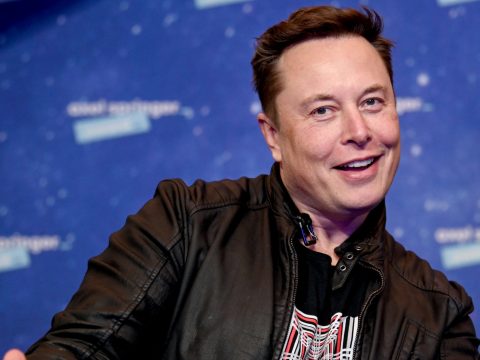