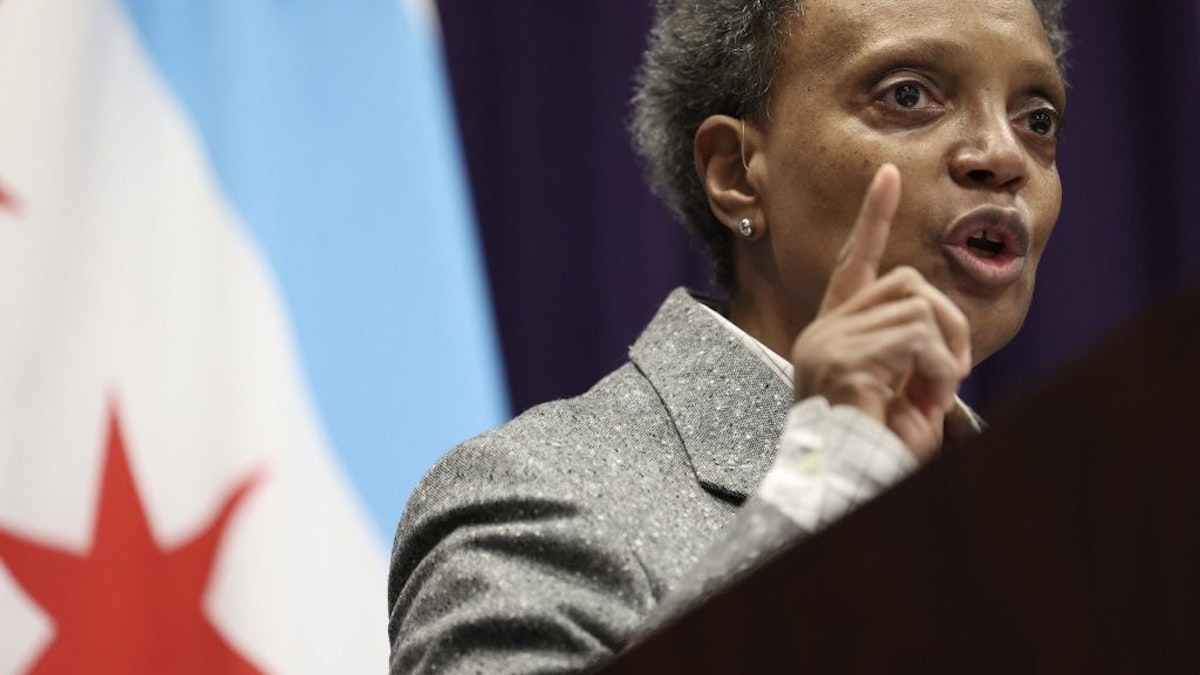 The city of Chicago could be moving toward a more open society, but not yet for its schools.

On Tuesday, Democratic Mayor Lori Lightfoot announced that the city will be ending its mask mandate for most areas, and its proof of vaccination requirement for restaurants, bars, and other indoor settings at the end of February.

Lightfoot said she will “not hesitate” to make new regulations and mandates in the future to safeguard public health but noted that her aim is to not “shut down our economy again.”

ABC Chicago reported that “Lightfoot said the key metrics of cases and hospitalization numbers are putting Chicago in a position to no longer require masks in most indoor spaces.”

“Because we are now on the downward slope of that surge, we don’t believe that there is any further need for these mandates,” Lightfoot said. “It’s important for us to recognize this moment for what it is — a huge step forward in our effort to overcome COVID-19.”

Businesses can still mandate masks or vaccination proof. The mayor also said she will keep wearing a mask in public settings.

“Particularly in a restaurant setting, where I have no idea now whether the people sitting around me are vaccinated, I’ll be wearing a mask,” Lightfoot said.

Authorities also noted that COVID-19 cases are down 97% from a high point in late December. Masks will still be mandated on public transportation, in healthcare locations, some other congregate areas per CDC guidelines and federal rules, and in Chicago Public Schools.

Chicago Department of Public Health Commissioner Dr. Allison Arwady said she is not expecting a large increase in COVID-19 cases following next week.

“We always expect as we lift some mitigations that we’ll see a little bit of a resurgence,” Arwady said. “One of the reasons why we don’t want to move too soon is to make sure that at the time that we lift that we can tolerate a little bit of an increase there. I’m very confident that the next short while here is likely to be reasonably calm.”

Arwady said mask requirements could come back “if we get back into a higher risk setting.”

The move comes as Illinois Governor J.B. Pritzker (D) plans to get rid of the indoor mask mandate for most public areas on February 28th if the number of cases of COVID-19 continue to go down.

The governor reportedly wants to maintain mask mandates for schools. His administration tried to get rid of a court ruling that questioned his legal ability for requiring masks, quarantines, and vaccination or testing rules for employees.

As the Chicago Tribune reported: “The ruling by Sangamon County Circuit Judge Raylene Grischow threw schools into disarray, as some districts immediately switched to a mask optional policy while others only allowed students whose families were part of the lawsuit to be exempt from mask requirements. Chicago Public Schools is continuing universal masking and other COVID-19 mitigation measures, while some suburban districts that initially kept their requirements in place have since given way to more lenient policies.”

An appeals court in Illinois tossed the governor’s attempt to overturn the ruling since the COVID-19 emergency rules were over, essentially making it so that Illinois school districts cannot force students and workers to wear face coverings. However, “the decision leaves room for school systems to implement their own COVID-19 safety rules,” per the Tribune.

“Because the emergency rules voided by the [Temporary Restraining Order] are no longer in effect, a controversy regarding the application of those rules no longer exists. Thus, the matter is moot,” the appellate court justices wrote.

The justices also stated, “We note the language of the TRO in no way restrains school districts from acting independently from the executive orders or the IDPH in creating provisions addressing COVID-19.”

While lots of school districts around Illinois have made masks optional, Chicago Public Schools (CPS) will continue to require masks following a January deal made with the teachers union.

“We have made great progress in recent weeks against this virus, and we do not want to jeopardize that progress by moving too quickly,” CPS said in a release. “We look forward to the day when we can be mask-optional at CPS, but we still need to get more students vaccinated across our district, and we still need to work with our public health and labor partners on the best way to preserve a safe in-person learning environment for all.”

In a statement, the Chicago Teachers Union said it was “glad that CPS will continue to honor the safety agreement that our members sacrificed four days of pay [for] last month … despite a right-wing legal attack to remove public health protections.”

“Still, a lawsuit by CPS parents in Mount Greenwood against the mandate could impact the situation going forward,” the Chicago Sun Times reported.

The Chicago Board of Education is poised to vote on a resolution at Wednesday’s monthly board meeting that would ratify district COVID-19 safety measures including universal masking of students and staff; testing for unvaccinated employees; and directing those who test positive or have been exposed to the virus to temporarily stay home.

Through the resolution, the board would also reaffirm CPS CEO Pedro Martinez’s authority to change district COVID-19 policies in consultation with public health officials “and other stakeholders,” which presumably include the Chicago Teachers Union.