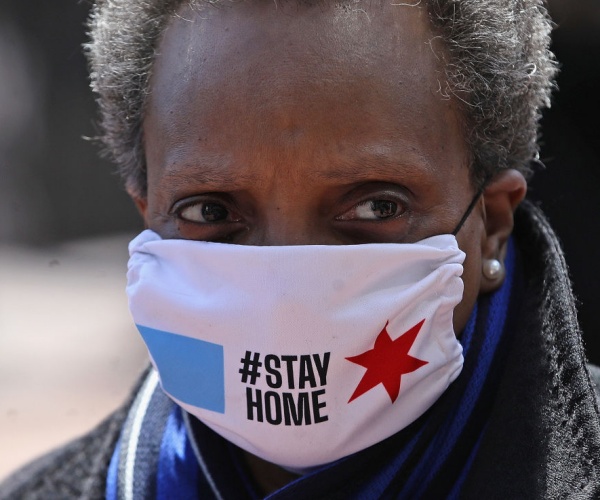 The lawsuit, filed on behalf of The Daily Caller, in the U.S. District Court for the Northern District of Illinois, Eastern Division, alleges Lightfoot violated reporter Thomas Catenacci’s equal protection rights under the Fourteenth Amendment and his First Amendment when she refused to respond to his multiple interview requests.

Earlier this month, a Chicago political reporter Mary Ann Ahern tweeted: “Lightfoot is granting 1 on 1 interviews – only to Black or Brown journalists.”

“Preventing journalists from doing our jobs in such a blatantly discriminatory way is wrong and does a disservice to our readers who come from all backgrounds,” Catenacci said, according to Fox News. “Every journalist and every person who consumes the news should be concerned by Mayor Lightfoot’s actions. This affects everyone. I look forward to holding the mayor accountable.”

Additionally, other reporters sharing Lightfoot’s preferred demographic have come out against her policy. Latino reporter Gregory Pratt condemned the mayor’s policy on Twitter. “I am a Latino reporter [at the] [Chicago Tribune],” Pratt tweeted, “whose interview request was granted for today. However, I asked the mayor’s office to lift its condition on others and when they said no, we respectfully canceled. Politicians don’t get to choose who covers them.”

Lightfoot’s office did not respond to Pratt.

According to Catenacci’s complaint, Lightfoot “purposefully discriminated” against him because of his race. Catenacci sent interview requests to the mayor on May 20, May 21, and May 24, seeking information on her administration’s efforts to vaccinate Chicagoans.

However, despite Lightfoot’s policy, on May 17, she sat down with MSNBC reporter Stephanie Ruhle, who is white.

0 5
Brzezinski: Trump Walking Around Knowing He Had Coronavirus 'Murderous' — 'Rather Sick, Actually''

0 19
Far Left Activist John Sullivan from Utah Who Was Arrested for Storming the US Capitol Is Released without Charges — Organized Antifa Event in Area at Same Time as “Stop the Steal” Rally!