The US Markets are spooked after short sells and counteracting actions are causing problems for online trading companies.

US markets are confused after a series of events over the past few days.  One company involved in the frenzy is GameStop according to MarketWatch:

On Wednesday, shares of GameStop  GME, +131.98%  shares rose 141%, pushing the company’s market value to an eye-popping $25 billion from a little over $1 billion at the start of the month and $10 billion at the end of Tuesday’s action.

The parabolic ride higher for GameStop, driven by a klatch of investors congregating on sites like Reddit’s WallStreetBest forum, has made the company the most traded stock in the U.S., according to Deutsche Bank data.

The rise in GameStop’s shares is potentially minting millionaires among the individual investor crowd but many short selling investors, those betting that the bricks-and-mortar company, which operates more than 5,000 retail video game stores in the U.S., Canada and Europe, was going to eventually lose value have been forced to unwind their bearish bets, accelerating the stock’s rise.

In addition, down detector on Twitter reported investment services going down or having problems this morning: 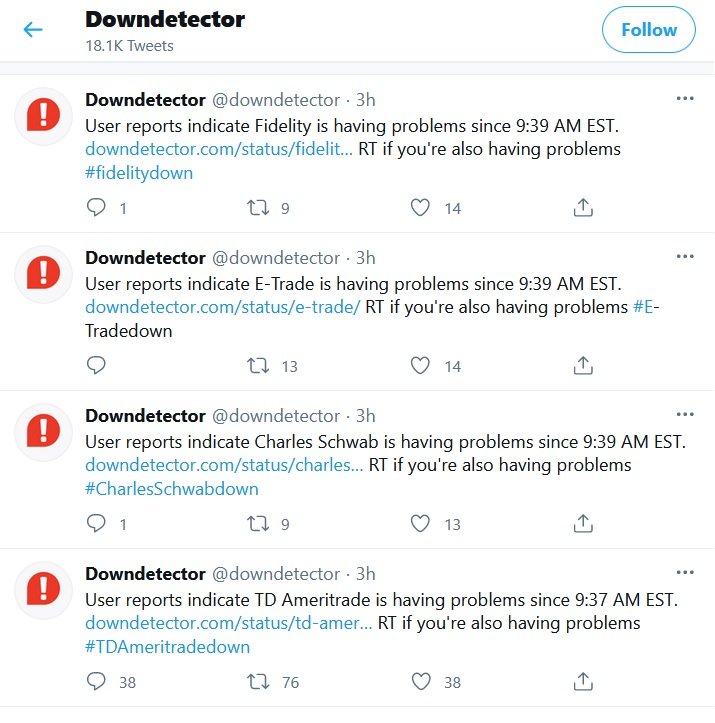 The markets overall are down about 1% at 1pm Eastern.  At the same time investment brokerages reported curtailing trading on GameStop and others:

Some major brokerage houses have begun to respond to a frenetic surge in the price of shares of companies that has been attributed to rabid buying by individual investors on social-media platforms.

On Wednesday, TD Ameritrade said it was restricting trading for GameStop and AMC Entertainment Holdings as well as other names, amid a triple-digit percentage surge in the price of those companies in recent days…

…The restrictive moves come as shares of videogame retailer GameStock have shot up 1,600% in January, as traders gathered in online chat forums to take large bets on the stock using options, often out-of-the-money calls that pay off only if the stock rises in value over a set period.

Traders on sites like Reddit’s WallStreetBets, and using trading platforms like Robinhood, have clashed with hedge-fund investors, sparking a battle between prominent Wall Street short sellers and individual investors in GameStop shares.

A Robinhood spokeswoman said that officials at the popular trading platform “continuously monitor the markets and adjust as we feel necessary for the benefit of our customers.”

However, the recent run-up in GameStop has been spilling over into other areas of the market, with shares of companies like AMC Entertainment also surging in price on Wednesday, along with shares of Bed Bath & Beyond and retailer Express Inc. whose shares were up 250%.

As the big hedge funds began to short sell certain companies, the word on social media was to buy the stocks.  This cost the short sellers millions as stocks like AMC Theaters, GameStop and Bed, Bath and Beyond went way up rather than further down.

These are the big gains today as the overall markets are down 1% almost across the board. 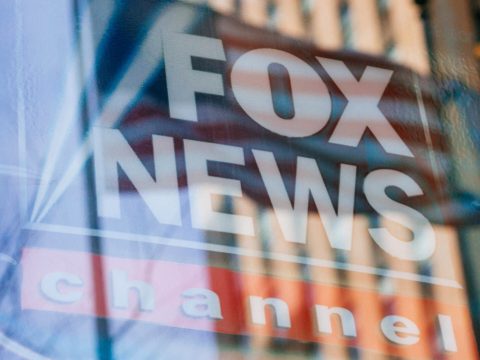 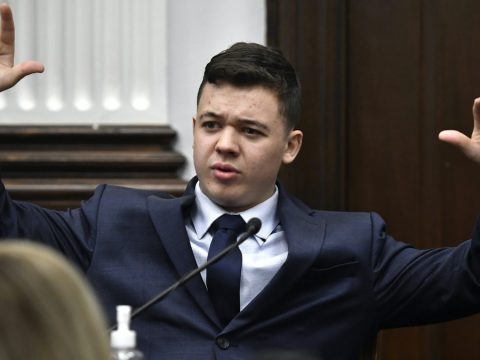 0 3
Biracial Student Was Allegedly Subjected To Taunts, Threats Of Failure By Teachers Because He Looks White