Heavily redacted bodycam videos from the West Terrace tunnel on Jan. 6, 2021, provide a glimpse into conditions at the time Rosanne Boyland lay unconscious—including the sound of her being beaten with a large wooden stick by police.

Several bodycam videos obtained by The Epoch Times have much of the screen blurred out by authorities, but key audio and video clues back up witness statements and other videos previously released by the U.S. Department of Justice.

A 39-second video clip from the D.C. Metropolitan Police Department shows the gloved hand of Officer Lila Morris picking up a long stick that was lying alongside an unconscious Rosanne Boyland, and then striking the prone woman multiple times. The sound of the stick making contact with Boyland’s body is clearly audible.

Boyland, 34, of Kennesaw, Ga., died on Jan. 6 after being trampled by a crowd of protesters trying to escape being gassed by police inside the West Terrace tunnel entrance to the U.S. Capitol.

A variety of videos show Boyland struck by a weapon wielded by a D.C. Metropolitan Police Department officer, later identified as Lila Morris.

The Epoch Times reported on Feb. 10 that the beating of Boyland, who was unconscious at the time, by Morris was deemed to be “objectively reasonable” after an investigation by the department’s Internal Affairs Bureau.

On the 39-second video, protester Luke Coffee of Dallas wielded an aluminum crutch and held it up in front of officers after Boyland was struck by officer Morris. “Stop! Stop!” implored Coffee, who was hit with pepper spray.

A few seconds later, a protester shouted, “You killed her, [expletive] pigs!”

A longer bodycam video clip picked up the dialogue: “We’ve got a man down here, dying!” someone said. “A man may be dead!” Another person shouted: “A medic! Now!”

In the far lower right part of the screen, Boyland is seen being given CPR after bystanders moved her away from the police line. Ronald McAbee, a sheriff’s deputy from Williamson County, Tenn., can be seen digging through a backpack, possibly looking for medical supplies.

A group of men carried an unconscious Boyland and set her down directly in front and center of the police line. “She’s [expletive] dead!” someone shouted. “You murdered her!” Another added: “She’s dying! She’s dying!” None of the police officers moved to render aid.

One of the protesters administered CPR to Boyland. “Compression! I need compression!” someone shouted.

Police then grabbed Boyland by the feet and dragged her on her back into the tunnel. Her lips are purple and her skin appears gray. A small amount of blood is visible below her nose. One witness said Morris’ final blow with the stick hit Boyland in the face and caused a nose bleed.

Joseph Hanneman is a reporter for The Epoch Times who covers the State of Wisconsin. His work over a nearly 40-year career has appeared in Catholic World Report, the Racine Journal Times, the Wisconsin State Journal and the Chicago Tribune. Reach him at: [email protected]

All copyrights and legal uses attributed to content are located at the article origination: The Epoch Times, Bodycam Footage Shows Capitol Police Striking Unconscious Trump Supporter Who Died on Jan. 6

2 410
El Salvador President on Ukraine: ‘The Real War Is in Canada’

2 4919
Psaki: ‘We’re A Little Tired Of’ Republicans Criticizing Us For Biden’s Border Crisis 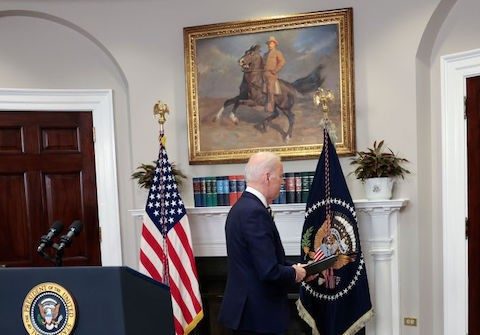 The excuses being made by the Neo n***i conservatives cult justification.of the biggest terrorist attack on our country on Jan 6 is pathetic those who broke into the capital deserved to be punished and killed

Rob, could you be any more brainwashed? Biggest terror attack?? 3000+ dead on 9/11 and you call this “the biggest terrorist attack on our country”? If you want to see a *real* Neo n***i go look in a mirror. You’re an idiot.

Rob is a big lefty. He wants everyone to know he is a good person even though he writes vile things about people he does not know.

Wow simpleton! Willfully ignorant of the TRUTH is a TERRIBLE way to spend your life. Extract your head from your @ $ $ , WAKE up, and SMELL the coffee!!

All want to know….have they been arrested and charged with MURDER??!!

MENU
wpDiscuz
7
0
Would love your thoughts, please comment.x
()
x
| Reply
Comment Author Info
Report this comment
You are going to send email to
Move Comment
Thanks for subscribing!