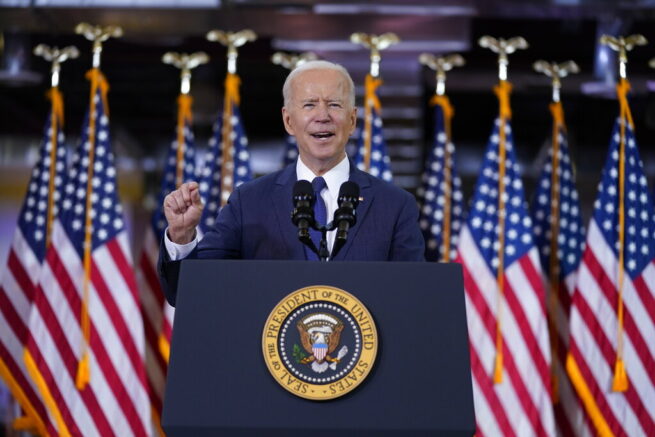 Joe Biden has unveiled his massive infrastructure plan, projected to cost roughly $2 trillion. Dubbed the American Jobs Plan, the details of it were made public during an event in Pittsburgh, Pennsylvania on Wednesday.

The plan calls for $621 billion to go towards transportation, with a heavy focus on transitioning to so-called “green energy,” followed by $400 billion to home care services, $300 billion to manufacturing and $213 billion to housing.

It would also allocate funds to digital infrastructure, schools and workforce development.

The American Jobs Plan will create millions of good paying jobs, grow our economy, make us more competitive, promote our national security interests, and put us in a position to win the global competition with China. pic.twitter.com/yaVX6MDB3M

Biden claimed the package would modernize the American economy and boost job creation.

“It builds a fair economy that gives everybody a chance to succeed, and it’s going to create the strongest, most resilient, innovative economy in the world,” Biden stated.

Meanwhile, conservatives have been quick to point out the huge price tag of Biden’s plan is mostly meant to be paid for by tax increases.

You got that right!

“Joe Biden’s radical plan to implement the largest tax hike in American history is a massive giveaway to China, and many other countries, that will send thousands of factories, millions of jobs, and trillions of dollars to these competitive Nations…” https://t.co/rQyF1YPgww

They argued it would lead to long-term economic stagnation and job losses.