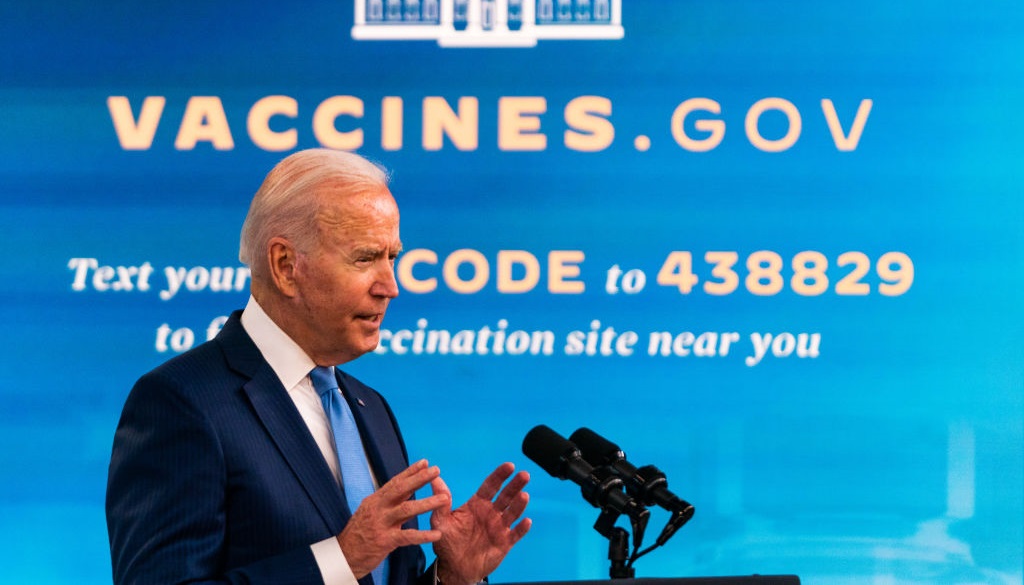 President Joe Biden’s job approval has been steadily sinking over the last few weeks — he is at just 43% approval in the latest Gallup poll out Wednesday — but his decision to empower the Occupational Health and Safety Administration to police COVID-19 vaccinations in thousands of workplaces is tanking him with black voters, specifically, per Morning Consult.

The news seems to coincide with a protest out of New York City alleging that Mayor Bill de Blasio’s own vaccine mandate, which requires individuals seeking to dine indoors at restaurants have at least one dose of a COVID-19 vaccine, is providing cover for racism and may, itself, be racist.

Morning Consult found that Biden’s approval dropped a striking 12 points among black voters since September 8th, the day before the White House announced a comprehensive new COVID-19 mitigation plan that included a new OSHA rule, which, when drafted, will demand workplaces with 100 or more employees either require their workers to be vaccinated against COVID or submit to rigorous testing for the virus.

“President Joe Biden’s sweeping federal rules to mandate vaccines hasn’t hurt him with the overall electorate, but it appears to have spurred a weakening of his standing with one of the most reliable pieces of the Democratic Party’s coalition: Black voters,” Morning Consult noted.

“Since Morning Consult Political Intelligence surveys conducted immediately before Biden’s Sept. 9 mandate announcement, the president’s net approval rating – the share who approve of his job performance minus the share who disapprove – has fallen 12 percentage points among Black voters, driven by a 17-point drop among unvaccinated Black voters,” the outlet said.

His approval rating among black voters is still high, but Democrats are looking at razor-thin margins in 2022, and 10 points from a key demographic could be the difference between holding both Houses of Congress or watching the federal legislature flip into Republican hands.

“The September erosion accounted for more than two-fifths of the decline in perceptions of Biden’s job performance to date among Black voters, providing a stark warning sign for Democrats ahead of next year’s midterms,” Morning Consult pointed out. “While Black voters, who helped push Biden over the top against President Donald Trump in key states last year, are unlikely to abandon the Democratic Party en masse to back Republicans on the ballot next year, low turnout from the group could have dire consequences for Democrats in Congress, who already face an early enthusiasm gap.”

The vaccine mandate appears to be to blame:

61% of Black voters approve of Biden’s handling of coronavirus, down 9 points since he announced the COVID-19 vaccine mandate. https://t.co/WFvY34dco8 pic.twitter.com/lqkqvZsQzH

The poll speaks to perhaps larger concerns over how minorities may fare if vaccine mandates become the norm. In New York City, a recent incident at Carmine’s steak house in Times Square ended up as a racial dispute with a Black Lives Matter group blasting the New York City dining mandate as racist and a cover for racism.

“Seventy-two percent of black people in this city from ages 18 to 44 are unvaccinated. So what is going to stop the Gestapo, I mean the NYPD, from rounding up black people, from snatching them off the train, off the bus?” she added. “We’re putting this city on notice, that your mandate will not be another racist social-distance practice. Black people are not going to stand by, or you will see another uprising. And that is not a threat; that is a promise.”

“The vaccination passport is not a free passport to racism,” Newsom said.