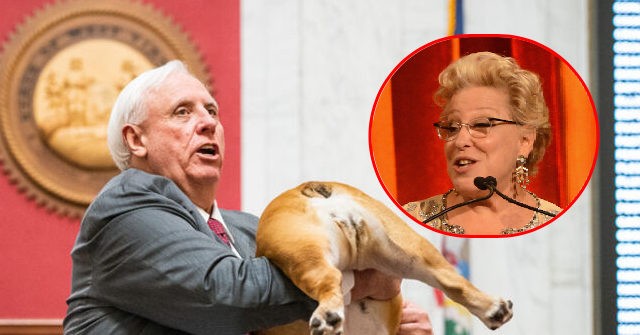 “BTW, here are the state rankings of all the areas and agencies for which the so-called ‘Governor’ of WVA, #JimJustice, is responsible,” tweeted Bette Midler on Thursday. “Judging from these rankings, I’d say his dog’s ass would make a better Governor than him!”

BTW, here are the state rankings of all the areas and agencies for which the so-called “Governor” of WVA, #JimJustice, is responsible. Judging from these rankings, I’d say his dog’s ass would make a better Governor than him! pic.twitter.com/TJAB3oj5VV

In her tweet, Midler included a photo of West Virginia’s rankings in areas like health care, education, and the economy, showing that the state ranked in 47th, 45th, and 48th, respectively.

The screenshot of the rankings appear to be sourced from U.S. News & World Report.

Midler was likely responding to a Thursday remark from Governor Justice, in which he flashed his pet bulldog’s buttocks to the cameras and told the actress to kiss the animal’s “hiney.”

Justice’s display came after comments Midler made late last year, in which the Freak Show actress described people from West Virginia as “poor, illiterate and strung out” while she was on a vicious rant targeting at Sen. Joe Manchin (D-WV), who had recently voted against President Joe Biden’s “Build Back Better” plan.

After insulting West Virginians, Midler received instant backlash, including from one West Virginia coal miner, who pointed out that people from his state contribute far more to the United States than the Hollywood actress.

After falling under fire, the Jinxed! actress switched to damage control mode and issued an apology to the “good people” of West Virginia for her latest “outburst.” adding that she was just “seeing red” over Manchin’s decision.

I apologize to the good people of WVA for my last outburst. I’m just seeing red; #JoeManchin and his whole family are a criminal enterprise. Is he really the best WV has to offer its own citizens? Surely there’s someone there who has the state’s interests at heart, not his own!