As economic worries loom large before the midterms, self-described socialist Sen. Bernie Sanders (I., Vt.) says Democrats should push for trillions of dollars in social spending to court voters.

Sanders on Tuesday told Politico Democrats should “raise the minimum wage,” “deal with Medicare,” and “deal with climate,” in order to keep Republicans from winning a legislative majority in November. By the senator’s own estimate on the 2020 campaign trail, Medicare for All could cost up to $40 trillion. And Sanders’s Green New Deal would cost at least $16 trillion. All told, his legislative proposals would total nearly double the current national debt.

The suggestion flies in the face of recent polls, which reveal voters greatest concerns involve the economy. Four in five Americans said inflation is the greatest concern determining their vote this November, a ABC News/Ipsos poll found this week.

After having passed President Joe Biden’s American Rescue Plan last year, Democrats are being blamed for contributing to record inflation, which is at a 40-year high. Liberal economists predicted the injection of federal stimulus would worsen the post-pandemic economy, with Obama advisers Steve Rattner and Larry Summers claiming Biden should now take responsibility for contributing to rising prices.

A Quinnipiac University poll released Wednesday found Biden’s approval rating is at 33 percent, the same as the lowest number recorded for former president Donald Trump. A majority of Americans also disapprove of Biden’s handling of the economy, according to the ABC/Ipsos poll.

Sanders said Democratic leadership should call out Sens. Kyrsten Sinema (D., Ariz.) and Joe Manchin (D., W.Va.) for holding up passage of larger spending bills, referring to them as “two corporate Democrats.” He added that “Republicans stand an excellent chance of gaining control of the House and quite possibly the Senate” due to legislative gridlock and Democrats’ insistence on playing up rhetoric about Trump and the 2020 election.

“You really can’t win an election with a bumper sticker that says: ‘Well, we can’t do much, but the other side is worse.’” 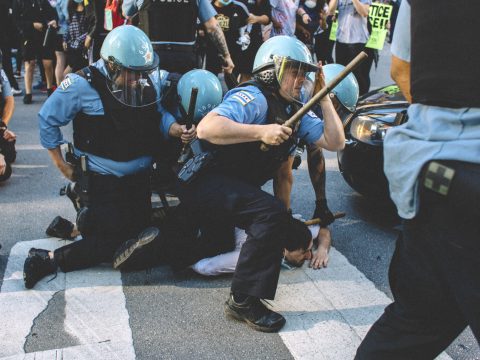