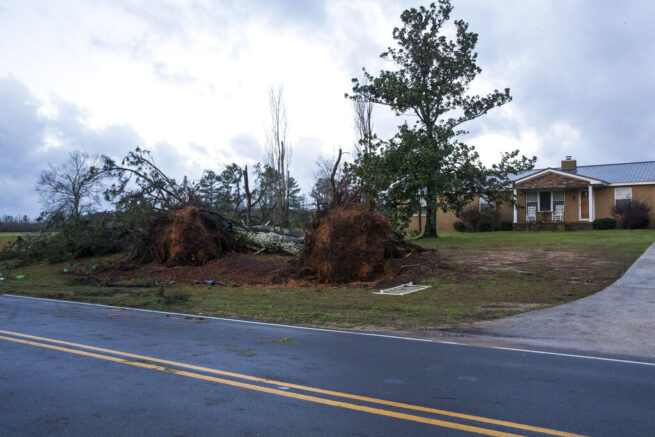 A tree is lays over a lawn in Clanton, Ala., the morning following a large outbreak of severe storms across the southeast, Thursday, March 18, 2021. Possible tornadoes knocked down trees, toppled power lines and damaged homes in multiple locations across the state of Alabama. (AP Photo/Vasha Hunt)

A developing storm is expected to bring another round of severe weather to the south. On Saturday, forecasts predicted the system will touch down in parts of Oklahoma and Texas on Monday, which could bring potentially damaging winds.

Models are indicating that there could be a small amount of severe weather in Central Texas on Monday. No concern at this time, but something to watch. pic.twitter.com/Df8c8wQFbF

The storm is set to track east and will threaten gulf states with rain and strong storms from Tuesday all through Wednesday. The National Weather Service is anticipating a cyclone formation off the coast of Florida, which could bring showers to the Carolinas and northern parts of the Sunshine State.

This came just a week after more than two dozen tornadoes hit southern states and put many southeast counties under tornado warnings.

First seen at © OANN, Analysts predict incoming storm set to hit the south this week, predicted to bring another round of severe weather, high winds, rain