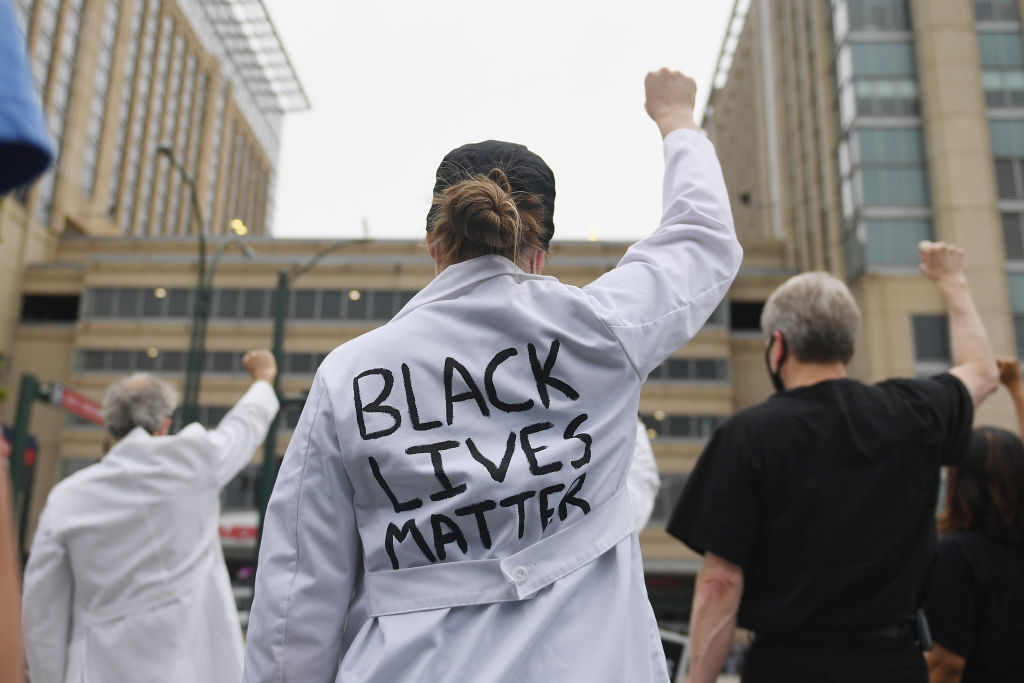 The plan announces a five-pronged approach to embracing equity. The AMA makes a commitment to “embed racial and social justice throughout” the organization’s policies and practices, and promises to “build alliances and share power with historically marginalized minoritized physicians.”

The organization also promises to “ensure equitable structures and opportunities in innovation” for marginalized communities and minorities, to “push upstream to address all determinants of health and the root causes of health inequities,” and to “foster truth, racial healing, reconciliation and transformation” regarding the AMA’s own past.

One of the plan’s specific goals is to expand medical school and physician education to include “equity, anti-racism, structural competency, public health and social sciences, critical race theory and historical basis of disease.” The plan pushes mandatory “anti-racism” and “equity-explicit” training for all medical trainees and staff.

The plan also includes elements that appear to have little to do with medicine or the medical community, including a declaration dubbed the “Land and Labor Acknowledgement.”

“We acknowledge that we are all living off the taken ancestral lands of Indigenous peoples for thousands of years,” the AMA’s declaration reads.

“We acknowledge the extraction of brilliance, energy and life for labor forced upon people of African descent for more than 400 years. We celebrate the resilience and strength that all Indigenous people and descendants of Africa have shown in this country and worldwide. We carry our ancestors in us, and we are continually called to be better as we lead this work.”

The equity plan slams the “myth of meritocracy,” saying the differences in outcomes among historically marginalized populations and minorities have been “explained away” as the results of a meritocracy.

“It is a narrative that attributes success or failure to individual abilities and merits. It does not address the centuries of unequal treatment that have intentionally robbed entire communities of the vital resources needed to thrive,” the AMA says.

Medical schools have adopted dramatic affirmative action policies in order to matriculate a “critical mass” of black applicants, who tend to score lower on the Medical College Admission Test (MCAT) than their white and Asian counterparts.

Lowering standards for those providing life-saving care could have dangerous consequences.

Seventy percent of the time, administrators said a white person with an MCAT score of 27-29 and a GPA of 3.40-3.59 would not make a suitable doctor. But more than 80% of black people with those scores were admitted. The AMA lists events that it says perpetrated “structural racism” against minorities.

One is what it calls “Johnson v. DeGandy” of 1992, apparently referring to Johnson v. DeGrandy of 1994, a court case about how congressional districts are drawn.

Another is the 1996 Supreme Court decision it calls Roman v. Evans. The Colorado governor’s name in that case was Roy Romer, not Roman. The court decided in the case that Colorado was violating the Constitution by preventing protected status based upon homosexuality.

The document positions the Supreme Court decision in Alexander v. Sandoval in a graphic purporting to illustrate the progress and setbacks against racism against Hispanics. But it positions it at 1992, when it occurred in 2001. That decision said that the Civil Rights Act only allows private lawsuits over intentional discrimination, not disparate impact on minorities.

The AMA claims that racism and discrimination ensure that “historically marginalized communities remain disproportionately plagued by early disease and abbreviated life.” According to the Centers for Disease Control and Prevention (CDC), however, Hispanics in the U.S. have a life expectancy about three years longer than whites.

In February, the AMA found itself embroiled in controversy over a since-removed podcast that was posted on the Journal of the AMA’s (JAMA) website, titled “Structural Racism for Doctors—What Is It?” The podcast featured two Jewish doctors, Ed Livingston, JAMA’s deputy editor for clinical content, and Mitchell Katz, an editor at JAMA Internal Medicine and CEO of NYC Health and Hospitals.

Livingston asked on the podcast, “Given that racism is illegal, how can it be so embedded in society that it’s considered structural?”

“People do have this response which we’ve said repeatedly, ‘I’m not a racist, so why are you calling me a racist.’ And because they respond that way, they are turned off by the whole structural racism phenomenon. Are there better terms we can use?” he said.

Livingston was asked to resign, and Katz apologized, but was put on administrative leave.

The AMA apologized in its equity plan for its “egregious, harmful error and failure in posting a podcast denying structural racism; keeping old wounds open while new ones form.”

University of Pittsburgh School of Medicine professor Norman Wang published a white paper in the Journal of the American Heart Association (JAHA) arguing that affirmative action has not actually helped black and Hispanic students. Wang was removed as director of the school’s fellowship program in clinical cardiac electrophysiology, and JAHA retracted the article.