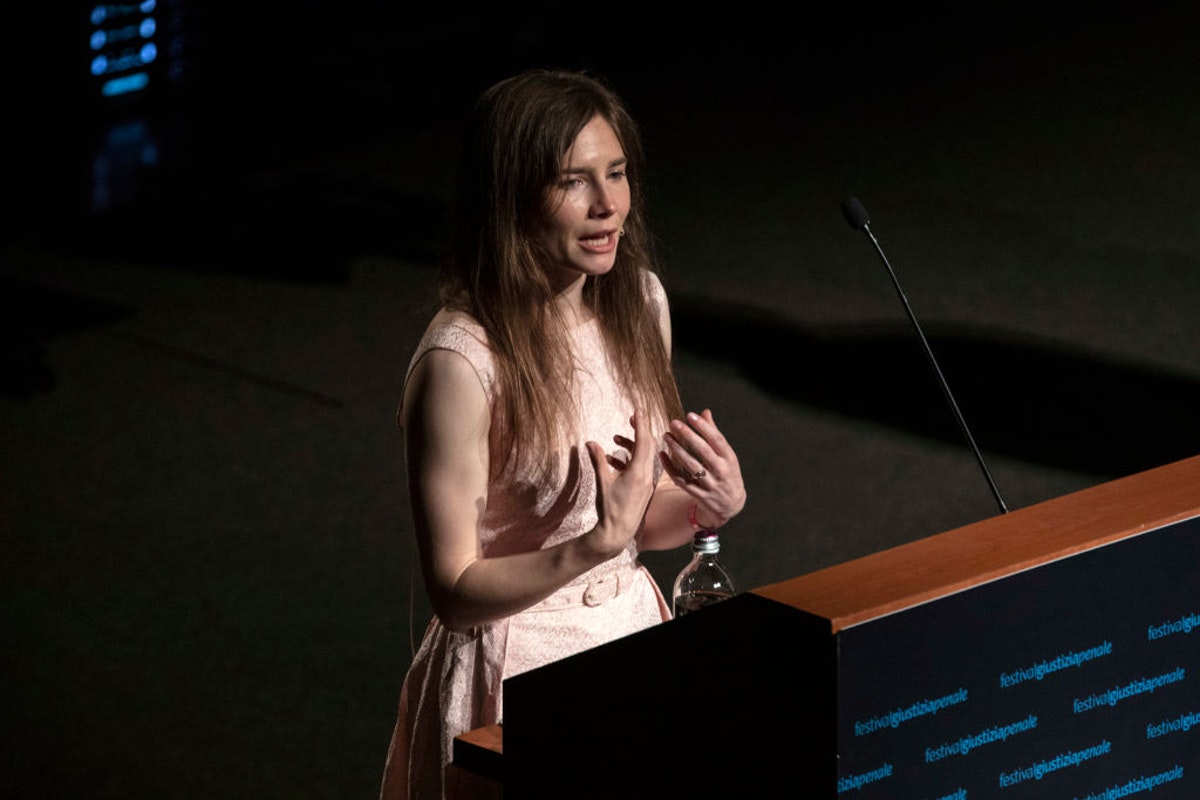 When Vanity Fair interviewed the director and co-screenwriter of the new Matt Damon vehicle, “Stillwater,” the man behind the movie said it directly inspired by the wrongful conviction and imprisonment of Amanda Knox, a U.S. student who was accused of murdering her roommate while studying in Italy.

“There were so many characters around the case that I really followed pretty closely,” said the director, Tom McCarthy. “But really the first thing that I took away from it was, what would that be like as an American student to go over [to Europe] for what should be one of the most exciting moments in a young-adult life and to find yourself in that tragedy? There were just so many layers to that story that kept anyone who was following pretty riveted…. Who are the people that are visiting [her], and what are those relationships? Like, what’s the story around the story?”

The director and French writers Thomas Bidegain and Noé Debré created a fictional storyline based on the true story of Knox, albeit with different characters and settings.

“We decided, ‘Hey, let’s leave the Amanda Knox case behind,’” McCarthy told the outlet. “But let me take this piece of the story—an American woman studying abroad involved in some kind of sensational crime and she ends up in jail—and fictionalize everything around it.”

The admission that the movie was a blatant rip-off of her life story didn’t sit well with Knox, who has tried to move on with her life after being falsely accused and wrongly imprisoned. Knox took to Medium on Thursday to call out the movie’s premise.

“Does my name belong to me? My face? What about my life? My story? Why does my name refer to events I had no hand in? I return to these questions because others continue to profit off my name, face, & story without my consent. Most recently, the film #STILLWATER,” Knox wrote

Taking issue with McCarthy saying the movie was inspired by the “Amanda Knox saga,” Knox questioned whether he was referring “to anything I did?”

“No. It refers to the events that resulted from the murder of Meredith Kercher by a burglar named Rudy Guede,” she wrote.

Knox went on to say that she had “near-zero agency” in how the story was reported or the murder investigated.

“This focus on me led many to complain that Meredith had been forgotten. But of course, who did they blame for that? Not the Italian authorities. Not the press. Me! Somehow it was my fault that the police and media focused on me at Meredith’s expense,” she wrote. “The result of this is that 15 years later, my name is the name associated with this tragic series of events, of which I had zero impact on. Meredith’s name is often left out, as is Rudy Guede’s. When he was released from prison recently, this was the NY Post headline.”

As to the director’s insistence that they wanted to “leave the Amanda Knox case behind,” Knox said his use of her name in promoting the film was the exact opposite of leaving it behind.

Knox continued by saying the movie “Stillwater” fictionalized her in a way that lined up with false media reporting of the Kercher murder.

“In the film, the character based on me gives a tip to her father to help find the man who really killed her friend. Matt Damon tracks him down. This fictionalizing erases the corruption and ineptitude of the authorities,” she continued. “What’s crazier is that, in reality, the authorities already had the killer in custody. He was convicted before my trial even began. They didn’t need to find him. And even so, they pressed on in persecuting me, because they didn’t want to admit they had been wrong.”

Knox then mentions McCarthy’s claim to Vanity Fair that “Stillwater’s ending was inspired not by the outcome of Knox’s case, but by the demands of the script he and his collaborators had created.”

This, she says, leads to a [SPOILER ALERT] ending where the Knox-inspired character “asked the killer to help her get rid of her roommate. She didn’t mean for him to kill her, but her request indirectly led to the murder.”

“How do you think that impacts my reputation?” Knox asked.

“By fictionalizing away my innocence, my total lack of involvement, by erasing the role of the authorities in my wrongful conviction, McCarthy reinforces an image of me as a guilty and untrustworthy person,” Knox wrote.

Knox then suggested her own screenplay, “directly inspired by the life of Matt Damon,” wherein the fictional actor is involved in a murder, not as the killer, but someone who is still somehow guilty. Also, she suggests a character based on McCarthy, who is also just like convicted sexual predator Harvey Weinstein.

“I never asked to become a public person. The Italian authorities and global media made that choice for me. And when I was acquitted and freed, the media and the public wouldn’t allow me to become a private citizen ever again,” Knox wrote.

.....Continue  at The Daily Wire, Amanda Knox Slams ‘Stillwater’ For Appropriating Her Life Story Without Consent