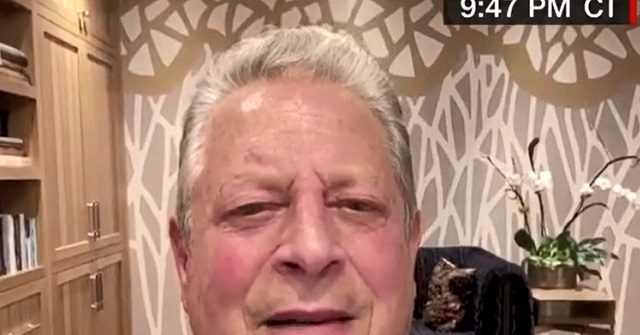 More than 40 years after Al Gore started sounding the alarm that global warming threatened the planet and human existence, the former vice president is still preaching the perils of climate change.

Gore’s 2006 film An Inconvenient Truth made him a wealthy man and he won an Oscar and a Nobel Peace Prize, even though his predictions have not panned out.

His latest interview with the left-wing media, which embrace and advance the ideology, was with CBS News on Gore’s 400-acre farm in Tennessee where he has lived during the coronavirus pandemic and where he leaves the toil to others.

CBS News asked Gore if people think of him as a farmer.

“I don’t think so and truth to tell, I don’t have many calluses on my hands either,” Gore said.

“His team handles most of the farm work, tending to the sheep and raising the animals that help fertilize the land where they are growing everything from carrots and beets to a variety of greens,” CBS News reported.

CBS reported that Gore’s farm is his “climate change laboratory:”

There is three times more carbon stored in the topsoil of the earth than all the trees and plants combined. By plowing less and making that soil more fertile, scientists believe that farmers could help trap massive amounts of additional planet-warming carbon emissions in the ground.

“There are better ways to plant,” Gore said.

CBS’s glowing report on Gore included advancing the idea the weather can be controlled by human practices and time is running out:

Gore says Mother Nature is now making the most effective argument for climate action, and he is encouraged by the rapid growth of solar and wind power and people buying electric vehicles in record numbers.

But the planet is still rapidly warming as we continue to pump near-record amounts of pollution into the sky, leading scientists to declare a code red for humanity.

“Job number one is to stop using the sky as an open sewer for all this man-made global warming pollution,” Gore said. “That’s what’s making the weather crazy and dangerous—leading to all of the consequences that are on the TV news almost every night now.” Gore went on:

A realist will tell you ‘Look, we’ve done some damage, some of it regrettably is not recoverable.’ But we go from where we are. You want to avoid tipping people into despair because some people go from denial to despair without pausing at the intermediate step of actually doing something about it.

“This crisis is still getting worse faster than we’re deploying the solutions,” Gore said. “There is a remaining question about whether we can solve it in time.”

“The more they march, the more noise they can make, the more demands they insist upon, the faster progress we’ll make. I’m a firm believer in that,” Gore said.