What Does the Poll Say?

The survey, conducted by Redfield and Wilton Strategies, gives former President Donald Trump 43% support among likely voters, while President Joe Biden only managed 38 percent. When pitted against Vice President Kamala Harris, once considered to be the natural successor for “transitional” president Joe Biden, Trump won by an even larger margin of nine points, with 44% to Harris’ 35%.

Trump also has reason to celebrate, according to the poll, with some 87% of voters who supported him in 2020 vowing to vote for him again. It was an increase of two percent over the same poll conducted last month.

President Joe Biden, meanwhile, lost support over last month’s poll. 77% of 2020 Biden voters said that they would support him again in 2024 – should he run. The figure is a drop of 2 percent over March’s poll.

It means that, at least for now, President Joe Biden’s support is declining and former President Donald  Trump’s support is increasing. It does not necessarily mean, however, that Biden voters are vowing in substantial numbers to switch their vote in 2024 for Trump.

In an interview published on Thursday, former President Trump repeated a previous suggestion that his health may be a factor that encourages him not to run for office again in 2024. At 75 years old, the former president would be 78 years old by the time of the 2024 election campaign and into his 80s by the time he hypothetically leaves office for a second time.

“You always have to talk about health. You look like you’re in good health, but tomorrow, you get a letter from a  doctor saying come see me again,” Trump told the Washington Post. “That’s not good when they use the word ‘again.’”

When asked specifically whether he intends to run again in 2024, he told the paper that he didn’t want to comment.

“But, I think a lot of people are going to be very happy by my decision, because it’s a little boring now,” the former president said.

The former president has said on multiple occasions that he cannot officially announce a third run for the White House without facing stricter campaign finance rules for his Save America PAC. Should Trump announce a third run, his ability to use that PAC money to assist America First candidates would be hindered.

One Democratic super PAC, however, filed a formal complaint with the Federal Election Commission on March 14 accusing him of breaking campaign finance laws by spending political funds on a 2024 bid without formally declaring his intention to run.

The complaint cites the former president’s own words to prove that he is running again in 2024.

“I know what I’m going to do, but we’re not supposed to be talking about it yet from the standpoint of campaign finance laws,” the former president said in the fall of last year.

Jessica Floyd, the president of the American Bridge PAC which filed the complaint, said that Trump “should have to adhere to the law in a way that all other candidates do.”

Combined with the many Save America rallies hosted by the former president over the last year, it looks increasingly likely that a third Trump campaign is on the way – and could be announced sometime after the November midterm elections.

Jack Buckby is a British author, counter-extremism researcher, and journalist based in New York. Reporting on the U.K., Europe, and the U.S., he works to analyze and understand left-wing and right-wing radicalization, and reports on Western governments’ approaches to the pressing issues of today. His books and research papers explore these themes and propose pragmatic solutions to our increasingly polarized society. 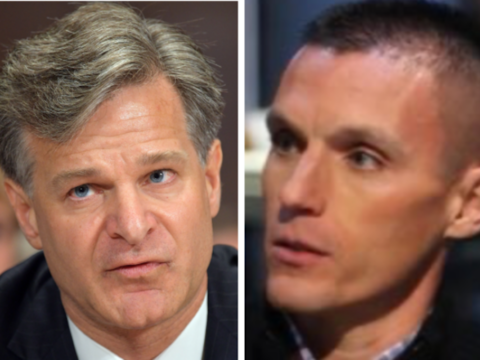