World Health Organization (W.H.O.) Director-General Tedros Adhanom Ghebreyesus served as a torchbearer in the last leg of the Olympic relay in Beijing on Friday, lending his support to an event the victims of communism assert is a celebration of genocide and other human rights atrocities.

Tedros’ presence at what detractors have branded the “Genocide Games” follows years of accusations against him that his relationship with the Chinese Communist Party is too cozy to allow him to properly do his job, resulting in catastrophic failures on the part of the W.H.O. to contain the Chinese coronavirus pandemic and investigate its origins.

Humbled to participate in #Beijing2022 Torch Relay. The Olympic Games are about hope & I wish for this flame to bring hope to people around the 🌍 that we can end #COVID19 together.
Thanks to @Olympics team & President Thomas Bach for inviting & welcoming me! #StrongerTogether pic.twitter.com/w2UNmfdYJh

Tedros reportedly benefited from Beijing’s support for the top job at the W.H.O. when he assumed it in 2017. Tedros is the first person to assume the director-general position without possessing a medical doctorate and was accused of covering up epidemics in his native Ethiopia prior to being accused of helping cover up the origins of Chinese coronavirus.

Tedros won a second term as head of the W.H.O., the United Nations health agency, in an uncontested election last month.

“Olympics is about hope, solidarity, unity, and peace. Especially hope to end this pandemic,” Tedros said in remarks shared through his Twitter account on Friday, expressing gratitude for having the opportunity to hold the Olympic torch. “The Olympic Games bring the nations of the world together in competition, as athletes strive to fulfill the Olympic motto of ‘faster, higher, stronger, together.’”

“That motto applies equally to our struggle against the defining crisis of our time: we must be faster in distributing vaccines all over the world. We must aim higher at vaccinating 70 percent of the population of all countries by the middle of this year,” he continued. “We must be stronger in removing every barrier that stands in our way and we must do it all together. May these Games unite the world and ignite the solidarity and determination we need to end the pandemic together.”

May the #Beijing2022 Olympic Games unite the 🌍 & ignite the solidarity & determination we need to vaccinate 70% of people in each & every country by the middle of the year, end the acute phase of the #COVID19 pandemic, so that people can come together & cheer. #StrongerTogether pic.twitter.com/bQWqmDwYeV

The Chinese state-run Global Times reported that Tedros arrived in Beijing on Thursday and will attend the Opening Ceremonies, which many governments have announced they would not send diplomats to in solidarity with the victims of communism. No country has boycotted the Olympics, however, for that cause.

The Global Times emphasized Tedros’ close relationship with the Xi Jinping dictatorship, noting that the W.H.O. chief visited China in the early days of the Chinese coronavirus pandemic to allegedly aid Beijing with its response.

“Over the past two years, China and the WHO have been working closely in sharing information, providing experiences, origins-tracing studies, supporting vaccinations among other areas of collaboration,” the state propaganda outlet reported.

The World Health Organization has faced severe criticism for defending multiple debunked claims out of Beijing, including announcing in late January 2020 that the highly contagious virus was not transmissible from human to human. The government of Taiwan – which the W.H.O. has banned from the World Health Assembly to placate China – revealed shortly after that it had attempted to contact W.H.O. officials in late December 2019 with intelligence it had gathered that a contagious disease was spreading in Wuhan, China, but that the organization had “mostly ignored” that message and chose to share false information from Beijing, instead.

In May of that year, the German newspaper Der Spiegel published a report, which the W.H.O. denied, accusing Tedros of agreeing to help China cover up the burgeoning pandemic by delaying warnings of the spread of an infectious disease. According to Der Spiegel, Tedros spoke to Xi directly, who urged him not to declare the rapidly spreading disease a pandemic. Tedros visited Beijing a week after the alleged call to praise the Communist Party for its handling of the situation. 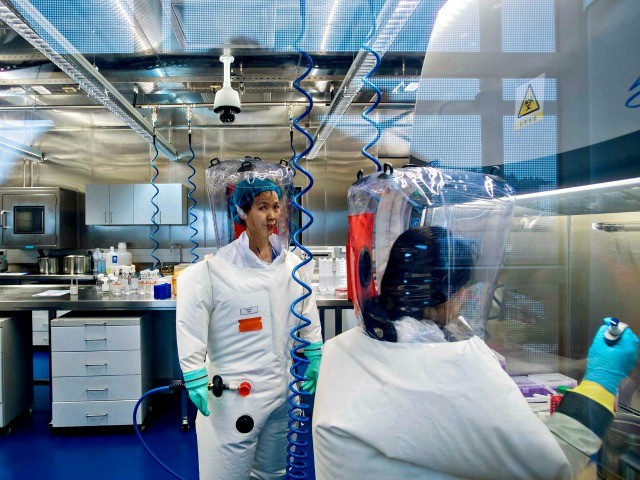 Chinese virologist Shi Zhengli (L) is seen inside the P4 laboratory in Wuhan. (Photo by JOHANNES EISELE/AFP via Getty Images)

The W.H.O. delayed an investigation into the origins of the Chinese coronavirus in Wuhan for over a year, allowing China to destroy critical evidence. When W.H.O. officials finally visited, the Communist Party significantly curtailed their access to key locations and forcibly oversaw the probe. The W.H.O. investigators concluded, despite finding no evidence of an animal reservoir of the disease, that it had originated in an animal who infected an intermediary species that then naturally infected humans. It ruled out any speculation about the virus potentially originating in the Wuhan Institute of Virology, a top laboratory that had been studying coronavirus at the time of the initial outbreak.

Tedros himself condemned the report.

“I do not believe that this assessment was extensive enough. Further data and studies will be needed to reach more robust conclusions,” he said following its publication in March 2021.

“Although the team has concluded that a laboratory leak is the least likely hypothesis, this requires further investigation, potentially with additional missions involving specialist experts, which I am ready to deploy,” he added. “We will keep you informed as plans progress, and as always, we very much welcome your input.”