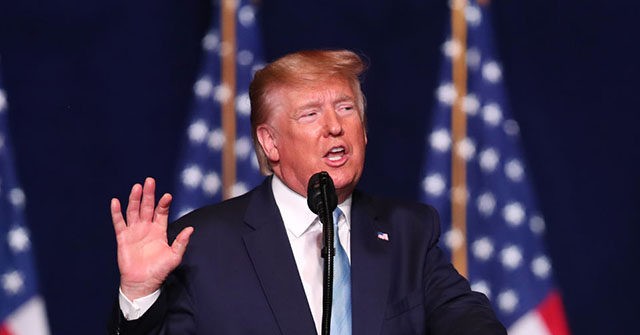 Former President Donald Trump weighed in on the eve of Virginia’s highly anticipated gubernatorial election, urging Virginians in a statement on Monday to “flood the system and get out and vote” for Republican Glenn Youngkin.

Trump bashed the “fake news media” for “trying to create” a false narrative about Trump’s relationship with Youngkin, accusing media of attempting to deter his “great and unprecedented Make America Great Again base” from turning out on Tuesday.

The former president stated that the media “are trying to create an impression that Glenn Youngkin and I are at odds and don’t like each other. Importantly, this is not true. We get along very well together and strongly believe in many of the same policies. Especially when it comes to the important subject of education.”

As a second reason to “flood the system,” Trump repeated his concerns with election integrity, an issue he has been persistently vocal about since leaving office as he frequently zeroes in on election battleground states like Arizona, Georgia, and Wisconsin.

Trump also praised Youngkin as a “good man,” adding that Youngkin “loves Virginia and wants to cut your taxes, save your children’s education, and many other very good things.”

He denounced former Gov. Terry McAuliffe, the Democrat gubernatorial candidate vying for his old job, as “a low-life politician who lies, cheats, and steals. He was a terrible high-tax governor and would be, if elected, an even worse governor again.”

McAuliffe, for his part, has used Trump as a means to attack his opponent at every opportunity in a state that voted ten points in favor of President Joe Biden in 2020.

The Virginia Democrat has accused Youngkin, who was endorsed by Trump early on, as being “Trumpian” and a “Trump wannabe” and repeatedly ties the two Republicans together despite Youngkin rarely mentioning Trump’s name on the campaign trail.

McAuliffe responded to Trump’s statement Monday by further peddling the connection between the two:

Today Trump said that he and Glenn “get along very well together and believe in many of the same policies.” We have rejected the racism, the hate, the division, and the lies of Donald Trump twice. And tomorrow, we will do it again.

Youngkin opted not to rally with any big-name Republicans — including Trump — in the lead-up to Election Day, whereas McAuliffe brought out several key Democrat players to campaign with him in the final weeks, including President Joe Biden, Vice President Kamala Harris, Democrat activist Stacey Abrams, Atlanta Mayor Keisha Lance Bottoms (D), and first lady Jill Biden.

Trump is still touting Youngkin from the sidelines, nevertheless, and plans to hold a tele-rally for the Virginia Republican at 8 p.m. on Monday. An advertisement for the event teased that it will have “tens of thousands of participants in the largest tele-rally ever.” Youngkin does not plan to participate in the event while he concludes his statewide “Win with Glenn” bus tour Monday evening in the heart of the education wars, Loudoun County, Virginia.

Trump in a second statement Monday afternoon reiterated that “everything is on the line in this election, and every MAGA voter should strongly support Glenn Youngkin.”