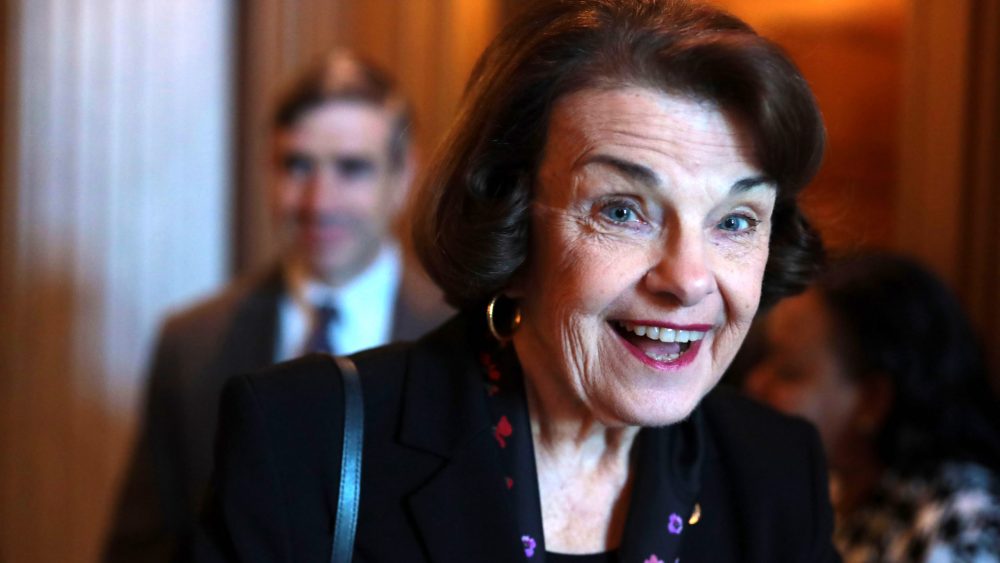 The nearly five-acre waterfront compound, which encompasses a main house and two guest houses, is listed under the LLC, Lucky Bluff, which is tied to Blum Capital, the investment management firm of Feinstein’s husband, Richard Blum, according to the New York Post.

“The second property, known as the Rubicon Pavilion, was created in 2015 for entertaining and includes a small kitchen and outside BBQ for al fresco dining. Pegged as a 5-star suite, the listing states this structure was designed for ‘special guests’ and influenced by a Buddhist stupa. Floor-to-ceiling glass windows showcase the lake beyond the large stone patio with a fire pit,” according to the Post.

“The last property, the Carriage House, comes with a tandem four-car garage, EV charger, an upper two-bedroom, two-bath suite apartment and a lower two-bedroom, one-bathroom apartment off the patio, which the listing highlights as ‘perfect for an onsite caretaker,’” the Post continued. The outlet notes the property is being offered “mostly furnished.”

At 88, Feinstein is the nation’s oldest senator, having represented California for nearly three decades. In March, she became California’s longest-serving senator.

Feinstein and her husband came under scrutiny last year for the lucrative stock trades they made just before the COVID-19 pandemic tanked the economy, which prompted an investigation from federal authorities. As The Daily Wire reported in May 2020:

Federal law enforcement officials have questioned Senator Dianne Feinstein (D-CA) over stock trades Richard Blum, the senator’s husband, made ahead of the coronavirus market crash. The senator’s husband reportedly sold between $1.5 million and $6 million in biotech stock from January 31 to February 18.

Tom Mentzer, a spokesperson for Feinstein, told the San Francisco Chronicle on Thursday that the California senator turned over documents that show she wasn’t involved in her husband’s stock trades, and “voluntarily” answered “questions to set the record straight.”

The spokesperson told The New York Times in mid-March, after reports emerged that four senators sold stocks before the market tanked, that Feinstein’s assets are in a blind trust. Feinstein tweeted on March 20 that her assets have been in a blind trust throughout her senate career, which began in 1992.

Allogene Therapeutics, the biotech company whose shares her husband traded, closed at $21.72 per share on January 31 and $24.25 on February 18. The company is currently trading at $42.55 per share.

Earlier this year, Feinstein said she would be willing to pay a fine for not properly disclosing other stocks her husband bought. As The Daily Wire reported:

According to Business Insider, Richard Blum, Feinstein’s husband of over forty years, purchased up to $50,000 worth of shares in The Generation Lab. The company, which was known as College Reaction at the time Blum made his purchase, is a Washington, D.C.-based polling and research firm that studies trends and young people.

Feinstein reportedly told the secretary of the Senate in a letter in early January that her husband’s investment should have been reported weeks prior. According to Business Insider, Feinstein is willing to pay any fines, but has not been contacted about doing so.