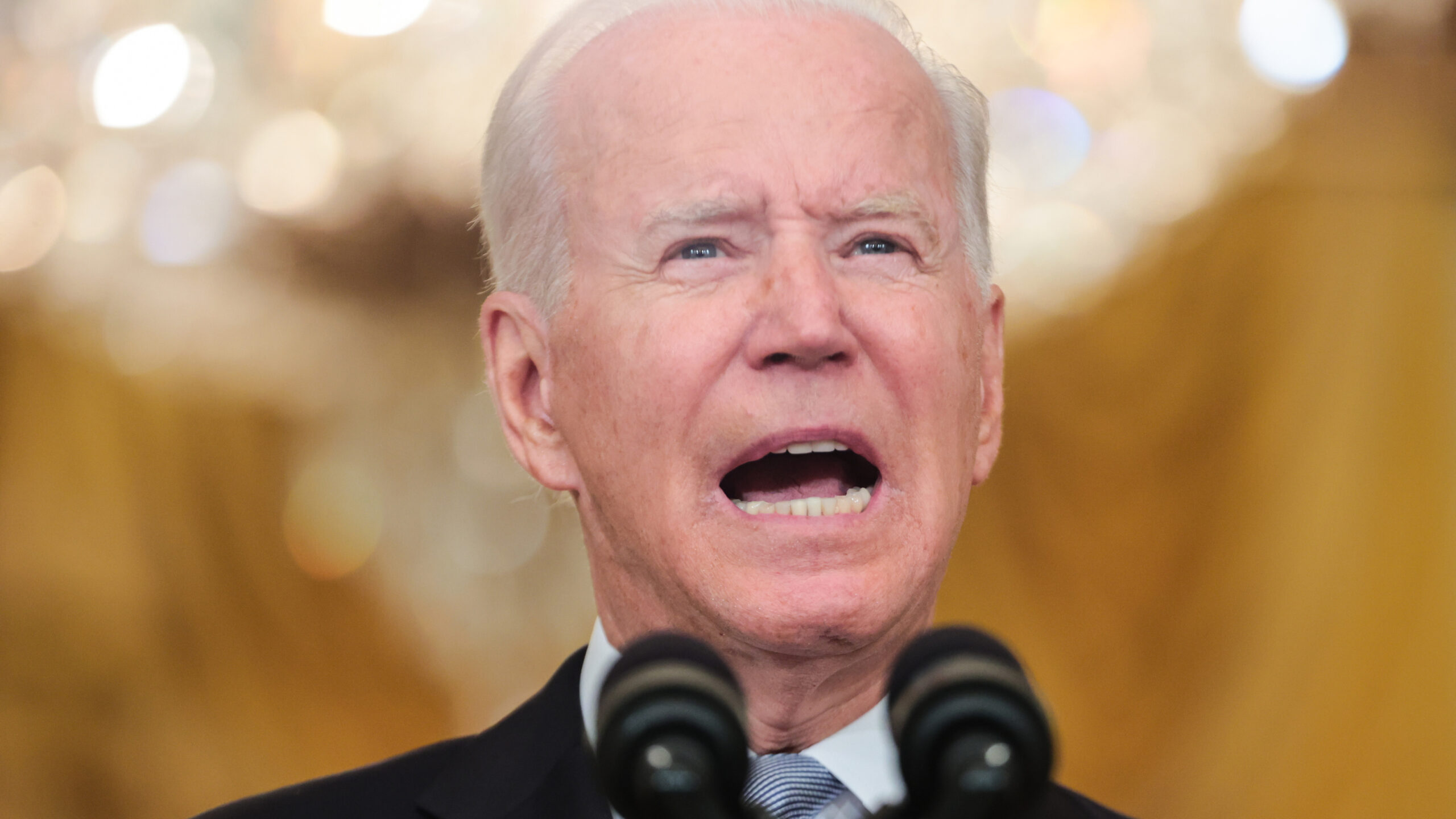 Senate Minority Leader Mitch McConnell warned during an interview on Tuesday that President Joe Biden’s chaotic pullout from Afghanistan could easily wind up becoming more costly to clean up than it would have been for the U.S. to have maintained operations at the rate they were going before Biden decided to pullout.

“We were spending about 1 percent of the Pentagon budget every year to keep the lid on in Afghanistan. We hadn’t lost a single American soldier in combat in the last year. It was working,” McConnell said. “It was working, because we went there, we went there to prevent Al Qaeda from being back in full operational mode under the Taliban and to sort of keep the lid on.

“My guess is, we’re going to end up spending way more trying to evacuate people with this slipshod operation. It’s an embarrassment. It’s a stain on our national reputation,” he added. “There are up to 15,000 Americans stranded out in the country who presumably have to beg the Taliban to let them get to the airport, not to mention the interpreters who worked with us and other Afghans who are in danger because they cooperated with us.”

McConnell said that “terrorists around the world are cheering” because of what they are seeing in Afghanistan. “Look, these guys couldn’t organize a two-car funeral,” McConnell added. “They had plenty of time to at least plan an evacuation and had a chance to be successful.”

SEN. MITCH MCCONNELL (R-KY): Glad to be with you, Bret.

BAIER: What are your thoughts? You saw the president’s speech yesterday. You have seen the administration’s efforts to talk about how they said they were prepared for every contingency. And you have seen the images coming out of the Kabul Airport.

MCCONNELL: Well, first, let’s talk about the decision to withdraw itself.

We were spending about 1 percent of the Pentagon budget every year to keep the lid on in Afghanistan. We hadn’t lost a single American soldier in combat in the last year. It was working.

It was working, because we went there, we went there to prevent Al Qaeda from being back in full operational mode under the Taliban and to sort of keep the lid on.

My guess is, we’re going to end up spending way more trying to evacuate people with this slipshod operation. It’s an embarrassment. It’s a stain on our national reputation.

There are up to 15,000 Americans stranded out in the country who presumably have to beg the Taliban to let them get to the airport, not to mention the interpreters who worked with us and other Afghans who are in danger because they cooperated with us.

All of this is the aftermath of the decision first to withdraw and then to withdraw in a precipitous and incompetent way.

BAIER: I want to get to that decision to withdraw, because, obviously, the Trump administration was in the same place.

I, for one, along with others, have been predicting this is exactly what would happen. The only question was, how quickly would it happen? And I’m, frankly, not surprised that there is a total collapse. When we left, our European allies left.

Remember, this was a NATO mission. We weren’t there alone, a NATO mission. When we left, our European allies left. The president immediately said, we’re leaving quickly. The Afghan military knew at that point they were on their own.

Senator, here’s the president talking about how he believed that enemies would want us to have stayed in Afghanistan. And he sticks by this decision. Take a listen.

JOE BIDEN, PRESIDENT OF THE UNITED STATES: But if Afghanistan is unable to mount any real resistance to the Taliban now, there is no chance that one year, one more year, five more years, or 20 more years of U.S. military boots on the ground would’ve made any difference.

Our true strategic competitors, China and Russia, would love nothing more than the United States to continue to funnel billions of dollars in resources and attention into stabilizing Afghanistan indefinitely.

BAIER: How do you respond to that?

MCCONNELL: Well, one thing we know for sure, the terrorists around the world are cheering. They are cheering, the terrorists in Syria, in Iraq, in Yemen, in Africa. They’re all watching the Taliban flag fly over the capital in Afghanistan, over the presidential palace in Kabul.

The Taliban has, in effect, in their eyes, defeated the United States of America. It’s an utter embarrassment. Our allies won’t trust us. This was an incredibly incompetent step.

And I’m going to say previous presidents have wanted to leave Afghanistan as well, but, in the end, they didn’t because we knew we had the lid on. We knew we had held Al Qaeda down. And that’s the most we could have hoped for in Afghanistan. Nobody thought we were going to create a Jeffersonian, Western-style democracy there.

But President Trump, definitely, in his term, wanted to get all American troops home. It wasn’t clear how exactly his exit was going to happen, other than they were trying to negotiate for something different than what we saw the other day.

If you take a look at this map where you see the Taliban movement over time, it’s pretty amazing what happened really in the past 96 hours for the Taliban movement. And The New York Times is saying that the intel was being presented saying that it was clear evidence of a collapse of Afghan forces after American officials decided to move out of the 2,500.

What would the Trump administration, what would Republicans have done differently if you were going to move those troops out?

MCCONNELL: Well, first, as I said, I wouldn’t have left.

I think the policy we were pursuing was working. If you were going to leave, at least you have to have a game plan to try to rescue the people who are endangered by these barbarians who are now in charge of this country.

BAIER: Do you have any constituents in there?

Look, these guys couldn’t organize a two-car funeral. I can’t imagine any — there was no plan at all. And you could see it coming. They had plenty of time to at least plan an evacuation and had a chance to be successful. So far, this evacuation has failed.

BAIER: Should the president be asking for resignations from his national security team?

MCCONNELL: Look, I mean, the president can decide who works for him. It was his decision. He owns it. It was a mistake of major, major proportions.

BAIER: Are any of your constituents in Afghanistan now?

BAIER: Any of your constituents in Afghanistan from Kentucky?

BAIER: I’m just saying, do you know of anybody on the ground in Afghanistan trying to get out? Are people reaching out to your office?

I have heard anecdotally that some senators and congressmen are trying to help individually, even though the administration is saying, we’re negotiating with the Taliban to let them into the airport.

MCCONNELL: Yes, we have heard from people in Kentucky who have relatives over there who are very much concerned about whether they are going to get out.

So, there’s — remember, there are up to 15,000 Americans out in the country clamoring to get to the airport. And their relatives all over America are quite concerned about their safety.

BAIER: And I just want to ask you one thing on the process going forward on the other side, the big issue, which is the infrastructure bill and what’s going to happen with Speaker Pelosi putting forward this big $3.5 trillion package.

As you see it, what’s going to happen?

MCCONNELL: Well, of course, I’m hoping the $3.5 trillion to $5 trillion tax increase is going to be defeated. That will be determined within the Democratic Party.

Every single Republican in the House and Senate is totally opposed to it. Let’s — if you just go back to February of 2020, we had the best economy in 50 years. And a big reason for that was the 2017 tax bill. They want to take that and rip it up and raise taxes on big businesses, small businesses, estates, hardworking people who make much less than $400,000 a year.

It’s a devastating blow to the economy, on top of the inflation we already have created by the big spending spree that they engaged in earlier this year. So, I think they’re clearly trying to take the country in the wrong direction.