The leader of the House Republicans Kevin McCarthy (R-Calif.) said Tuesday that he supports the removal of all of the Confederate statues that are members of the Democrat party from around the U.S. Capitol.

McCarthy said during a speech from the House floor that he will vote in favor of resolution H.R. 3005 to remove the Confederate statues put there by Democrats who controlled the House at the time and enacted racist laws then and are replacing the old racist laws with new racists initiatives.

“The bill, we’re voting on today we voted before. And I supported it, I support it now. Let me state a simple fact. All of the statues being removed by this bill are statues of Democrats,” said McCarthy.

The proposed legislation which passed the House Tuesday seeks to remove the bronze sculptures of those who supported the Confederate army in the Civil War. It also seeks to replace a bust of former Chief Justice Roger Taney, who authored a key decision in 1857 supporting slavery, with one of Thurgood Marshall, the first black Supreme Court justice.

Taney had written the majority opinion of the 1857 Dred Scott decision which stated that black people were not American citizens and that slavery was not prohibited under the U.S. Constitution. The decision was later overturned by the 13th and 14th Amendments to the Constitution, in 1862 and 1868 respectively.

“Madam speaker, today the Democratic Party had doubled down on what I consider this shameful history by replacing the racism of the past with the racism of the Critical Race Theory. They continue to look at race as the primary means of judging a person’s character,” said McCarthy.

McCarthy said that the Biden administration is pushing CRT initiatives through all federal agencies including the federal Human Resource Dept., the Office of Personnel Management (OPM), Dept. of Education, and the military.

President Joe Biden issued an executive order in January to combat racism which his administration said is permeating the United States. ”It is, therefore, the policy of my Administration that the Federal Government should pursue a comprehensive approach to advancing equity for all, including people of color and others who have been historically underserved, marginalized, and adversely affected by persistent poverty and inequality.”

Ms. Kiran Ahuja, who was recently confirmed as director of OPM, has praised the work of Dr. Ibram X. Kendi and would have the power to decide human resource initiatives and personnel policy for thousands of federal employees, including requiring CRT-type training.

During her April confirmation hearing, Ahuja was questioned by Sen. Josh Hawley (R-Mo.) who expressed concerns about her past advocacy for the writings of Kendi, an “antiracist activist” and advocate for the CRT model.

Kendi, in a September 2020 interview with The Atlantic, said if CRT and the teaching of “what really happened in history” cause people to hate the United States, then so be it.

During the confirmation hearing in April, Hawley pressed Ahuja on her views about training based on CRT, and at one point asked the new director if she agreed with Kendi that the election of former President Donald Trump was “racist progress,” and if she views the United States as a systemically racist country.

“I do understand the role of this position. I very much take that very seriously and upholding merit system principles. I also understand the value of no one should be discriminated based on their race—I was a former civil rights lawyer and I take that very seriously. I think we all uphold what Martin Luther King Jr. (MLK) said which is we should be judged by the content of our character and not the color of our skin, and that’s the approach that I’ve taken,” she replied.

According to Legal Insurrection Foundation’s criticalrace.org website, which advocates for the teaching of CRT, they say that this model is not based on the “traditional civil rights movement which sought to provide equal opportunity and dignity without regard to race” but rather an outgrowth of European Marxist theory.

“CRT, and the training to implement it is a radical ideology that focuses on race as the key to understanding society, and objectifies people based on race,” it states. 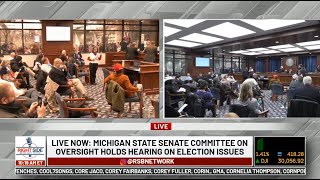