Joy Behar referred to Republican Florida Gov. Ron DeSantis as a “negligent homicidal sociopath” during Tuesday’s broadcast of “The View.”

Behar lashed out at DeSantis over his ban on mask mandates in the state of Florida, arguing that he was putting children at risk by not allowing schools to enforce mask policies. (RELATED: ‘I Put The Damn Mask On’: Joy Behar Accuses McCarthy Of Bucking Masks To Tank Biden’s Numbers)

“The president’s plan to get kids back to school safely is hitting some road blocks,” cohost Whoopi Goldberg began. “He says kids need to mask up since they can’t get the vaccine yet. But some parents, states and local officials are against it and New York Teachers Union is saying no to vaccine mandates for teachers. Gov. DeSantis is banning mask mandates even though Florida has more kids in the hospital than any other state. I mean, where’s the logic? What am I missing here, Joy?”

Goldberg went on to say that she just couldn’t understand DeSantis’ position before turning the floor over to Behar.

“You’re just short of calling him a negligent homicidal sociopath. That’s what he is,” Behar replied, going on to give some of the data on the rising number of cases among children in Florida.

“Then this sociopath, this dangerous criminal, he tells schools that they will rescind funding if they insist upon a mask mandate,” Behar continued. “What is he doing? What is he doing? He’s risking the lives of children, children’s parents, their grandparents, anyone they come in contact with so he can appeal to his white supremacist base and continue in his career and get reelected.”

“I don’t know. Sunny, maybe you know whether this is negligent homicide. That’s what I call it,” Behar concluded.

0 23
CNN: American Racism Will Never Disappear; It Will Become ‘White Supremacy With A Tan’ 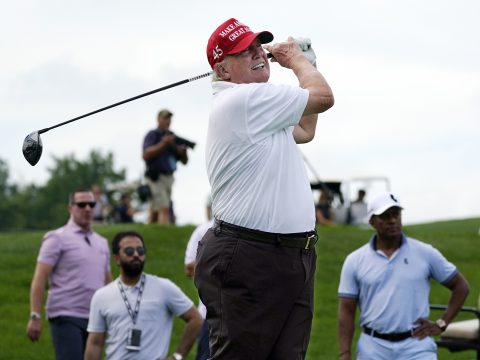