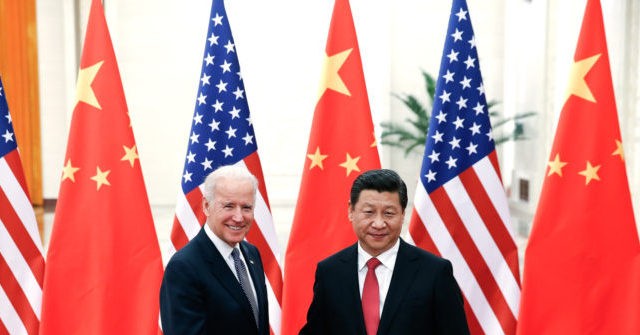 Former Trump administration officials say President Joe Biden is taking too soft an approach on the security threat from China in hopes of cooperating with Beijing on climate change.

Despite Chinese President Xi Jinping not being at the recent COP26 climate summit, Biden avoided a confrontational response when asked by a reporter about China’s military advancements and if he was concerned that the potential for war has grown during his time as president.

“Am I worried about an armed conflict or something accidentally occurring with China? No, I’m not,” Biden said. “I’ve had hours of conversations with Xi Jinping both in person when I was vice president and since I’ve been president, at least five or six hours’ worth of conversations on the telephone, and I am going to be having a virtual summit with him. I’ve made it clear…this is competition; it does not have to be conflict.”

A recent New York Times article said Biden’s top aides argue it should be possible for the U.S. and China to “compartmentalize,” and cooperate on the climate and North Korea, while competing on technology and trade, or “jousting for advantage in the South China Sea and around Taiwan.”

However, there have been a number of media reports on China’s growing military capabilities. According to those reports, China has taken major steps in hypersonic missile and space capability, its nuclear weapons buildup, and the scale of military exercises around Taiwan, a potential flashpoint with the U.S.

Some former Trump administration officials say the Biden administration’s strategy to cooperate and compete with China at the same time is unrealistic.

“Did the Chinese sign off on that? It doesn’t even make sense to me because climate policy is about future growth, so it’s like the most geopolitical thing you could actually think of,” said Elbridge Colby, former deputy assistant secretary of defense for strategy and force development in the Trump administration, at a security conference recently.

He also wrote in a recent Wall Street Journal op-ed that “an ascendant view inside the Biden administration” seems to be that although China represents a serious economic, political and technological challenge to American interests, it is not a direct military threat.

“This is a very imprudent assumption that could lead to war and, ultimately, American defeat. To avoid that disastrous outcome, the U.S. must recognize that China is a military threat—and conflict could come soon,” he wrote.

Another former Trump administration official said the Biden administration’s messaging on China has been “ambiguous,” and some of the tension could come from competing camps within the administration.

“I think it has to do with climate and the kind of factions within the administration between the John Kerry climate activists and some of the China hawks who are probably situated on the National Security Council,” said the former official, who spoke on background in a briefing with journalists last week.

The former official said the vast majority of Biden’s national security team seems hawkish on China, in a continuation from the Trump administration, but there is evidence of others pushing for a softer approach, as evidenced by Biden’s address at the United Nations General Assembly where he alluded to China several times but did not mention it by name.

“It was a missed opportunity in my view to take a harder line on China. Those speeches go through an incredible vetting process and lots of people have input,” the former official said. “This was an explicit decision not to mention China…so that, to me says that the Kerry faction won out in whatever internal battle that was going on.”

The former official said it is not clear whether the president himself stands on China. Biden has repeatedly suggested the U.S. would come to the defense of Taiwan militarily if China makes a move, but White House officials have quickly come out to walk back his comments. “There’s some kind of disconnect here,” the former official said.

A third former Trump administration official, also speaking on background, said the Biden administration has been soft on China when it comes to Iran policy.

“We’ve seen the tension play out as well on the Iran side, where China is obviously the leading sanctions breaker right now. The exports of Iranian crude oil to China have continued to rise throughout the year, which has basically eviscerated any sense of a maximum pressure campaign, which is why the Iranians feel so comfortable to drag this out at the moment,” the third former official said.

“And yet there has been no crack down on sanctions violations of any significance from this administration. Again, there’s clearly a counter pressure there to preserve good feelings with the Chinese coming from somewhere, and it would make sense for it to be John Kerry,” the former official said.

0 3
She Claimed She Was Raped To Get A Cop To Take Her Back To Town. She Was Just Charged For Lying.