I know I am doing Senator Kyrsten Sinema (D-AZ) no favors by praising her in a conservative platform, yet it needs to be said that Sen. Sinema is spot on to advocate for a restoration the filibuster rule of the United States Senate in a way that will bring more decorum and cooperation between the parties. The filibuster needs to be expanded, not constricted.

Democrats are beside themselves that Sen. Sinema spoke at an event sponsored by Sen. Mitch McConnell (R-KY). The Wall Street Journal reported on September 26, 2022, “Sen. Kyrsten Sinema (D., Ariz.) called for reinstating Senate procedures requiring a supermajority to confirm judges and executive-branch nominees, in remarks underscoring her disagreements with fellow Democrats over the filibuster.” Liberals were apoplectic that she argued for a restoration of the Senate’s filibuster rule as applied to nominations.

The great irony is that today, the Senate is violating the rules every time they end debate on a nomination with a simple majority vote. Senate Rule 22 states, that when a motion is put before the Senate to close debate “and if that question shall be decided in the affirmative by three-fifths of the Senators duly chosen and sworn” then the Senate shall consider that measure – nomination or bill. There is no provision in the rule for a majority vote to end debate on nominations.

Senate Majority Leader Harry Reid (D-NV) back in 2013 decided to have the Senate ignore the rules under the pre-text that filibustering nominations was unconstitutional as applied to all nominations but the Supreme Court and imposed a precedent by a simple majority vote. Republicans blew up that exemption when they had the chance to overcome a filibuster on a Trump nominee to the High Court in 2017. This has led to the minority party being sidelined when it comes to nominations.

Both parties have abused the rules of the Senate to marginalize rank-and-file members in a way that gives the majority party leaders extraordinary powers. Back in 2005 it was Senate Republicans who were pushing the so called “Nuclear Option” to push the nominations of President George W. Bush through the Senate by majority vote. Now we are in a situation where the partisanship that led to the abolition of the filibuster on nominations has resulted in a broken Senate that does not work as our Founders intended.

Our Founders wrote the Constitution in a way where Senators are supposed to both advise and consent to a nomination. There are three steps to the process. First, the president nominates, then the Senate considers the nomination and finally the president swears in the nominee. That second step has been interpreted as a rubber stamp by those who favor a powerful executive. Sen. Sinema is right to want to restore the right of extended debate on nominations as a means to restore some power to the Senate in the nomination process.

A restoration of the filibuster would stop the shift of the Senate towards a body resembling the House were rank-and-file members of both parties have little power other than to vote. The filibuster, in addition to the tradition of unlimited amendments on bills, makes the Senate a unique legislative body that allows all one hundred members to have a say through extended debate or amendment votes. Over the years, those rights have been restricted and the Senate has become a more leadership driven body.

That leads to another big problem in the Senate that was not addressed by Sen. Sinema. The leaders of both parties have used a tactic called “Filling the Amendment Tree” to block all amendments on bills. The leader calls up a bill and then places blocker amendments on the bill to prevent rank-and-file members from amending bills without the consent of the Majority Leader. Senators of both parties need to stand up to leadership to restore the right of all Senators to offer amendments on bills.

Sen. Sinema is clearly an independent thinker who is not afraid to reach across party lines. We need more like her in both parties. As a longtime advocate for the traditional role of the Senate to be a deliberative body, I am happy to see that Sen. Sinema is showing the power of one Senator to fight for the right to participate in extended debate.

Sometimes a senator needs to push back against the leadership of his or her own party to do the right thing and stand up for justice.

Brian Darling is former Counsel for Sen. Rand Paul and author of 2011 Heritage Foundation Report titled “The Filibuster Protects the Rights of All Senators and the American People.” 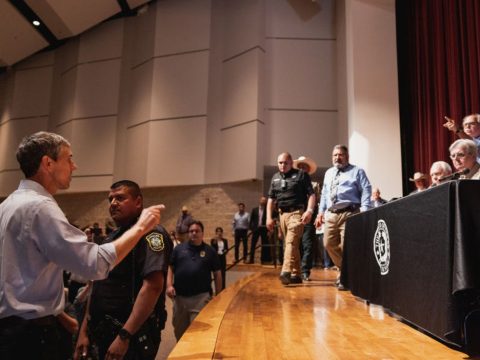 0 15
‘Why Wouldn’t They Hate Us’: Fmr Rolling Stone Editor Admits Why Many Americans Hate Journalists